After our short walk around Ouidah, we hopped back in the taxi and continued to Doutou (DUE – TOO), the village where Marianne lives. Marianne is a Christian missionary working to translate the Bible into the Saxwe (SAHW – WAY) language, living in a Saxwe community and learning the community language and culture. Her goal, and that of the team of missionary linguists she works with, is to learn the local language well enough to work with local people and effectively translate the Bible. She is not associated with any one religious group within the community, she works with all of the local Christian faith groups, as well as other people interested in the Saxwe language and culture. Although we may not adhere to her Christian faith, we see the work being done to update and teach an alphabet for the local spoken language, the documentation of the spoken language, and the work done to understand the culture as very valuable, both for cultural preservation and lifting up the language and culture for humankind.

We learned that white people are often called “Yovo” in Benin and Togo, and that a Yovo living in a small village like Doutou is a very rare occurrance. Even finding a place to live can be a challenge, since few homes are available to rent.

Marianne’s house is a small oasis in the village (about 90 km from the economic centre, Cotonou, but about a 3-hour drive). Unlike many in Doutou, her house has both running water and electricity. Most people draw water from wells, and only a small number of shops and businesses have electric power. In contrast, almost everyone has a mobile phone, and there are two mobile towers in the village.

Her running water is achieved using a 35m well, a water tower with a 2000L cistern, a pump, and a generator. The generator is used to pump water from the well into the cistern on the water tower. She pumps the water about every 3 or 4 days. From the cistern, gravity feeds the water to toilets, sinks and showers.

Her electricity is somewhat unreliable and inconsistent. When she plugs her computer in, her lights flicker. The power coming from the line (supplied by the Benin grid), is rather weak and inconsistent, hovering below 190V for a nominal 220V service and dropping much lower at times. In part this is because it has to travel about 1 km from the road on very narrow gauge wire (at at least one point in the line, telephone cable was used to instead of electrical wire). Marianne has purchased some solar panels and is planning to install them shortly in order to create some backup power for her computer and for lights when the grid power is not sufficient. She is also hoping to run better quality power lines from some new power poles (an important person lives not too far away, and new power poles were put in recently to service his compound – these should provide higher voltage). When someone pays the utility to have new infrastructure built (such as the person down the road), they control access tio that infrastructure for five years. After five years, it becomes public access. As a result, Marianne had to get special permission to run the extra line to her home. Quite different from how things work in Canada!

Marianne also has a fridge, but because of her electrical issues, she can’t operate it without running the generator full time, which would be both very loud and expensive. When she can get the new line installed, she hopes that the voltage and current from the new line will be sufficient to run the fridge. Today when she wants a cold drink, she needs to walk into town and buy it.

This has made me realize, that even if people do have electricity, it isn’t necessarily adaquate. One key theme in the eLearn Africa conference was the lack of access to reliable electricity. I had taken unrealiable to mean electricity that cut unpredictably. It had not occured to me that it might be that the electricity is not strong enough.

In addition to the limitations of the electrical grid, Benin also has very slow Internet. At the conference, we were able to get wifi that allowed us to upload the occassional picture. Out at Marianne’s we are limited to 2G cellular Internet. When Marianne needed to view a 4-minute youtube video showing how to bleed the air from the fuel lines in her generator, it took 4-hours to download the 4-minute video. So, even if the Internet is available, the speed is often too slow to access much of the content. Benin has just awarded its first 3G/4G mobile spectrum allocations, and a new undersea cable connection to Europe has recently been completed, so hopefully Internet speeds will improve over the coming years.

With our morning chores completed, we walked into town with the hopes of purchasing some fabric. Unfortunately, the lady who sells fabric in the village was not in that day. In addition to purchasing fabric, Marianne had planned for us to visit a restaurant on a Lake near her village, lake Ahèmè (where the Possotome bottle water is made). Originally, we looked into taking a Zem, I would ride with Marianne on her moto and Scott would take a Zem. This would work for getting there but getting back in the dark would be a problem. Fortunately, Marianne’s colleagues, a missionary family in the next village, were willing to lend us their truck for the evening. With the truck, we were able to go to Comé, a nearby town and purchase fabric before heading to the lake for supper.

At the lake, we enjoyed a wonderful dinner of rabbit and fish, and several hours of interesting conversation about life, religion and culture. All together, a delightful day!

Marianne’s compound seen from outside. You can see the cistern up on the tower. 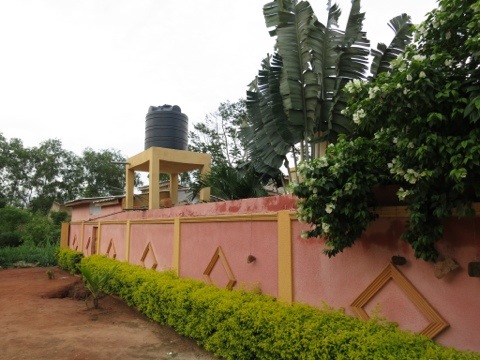 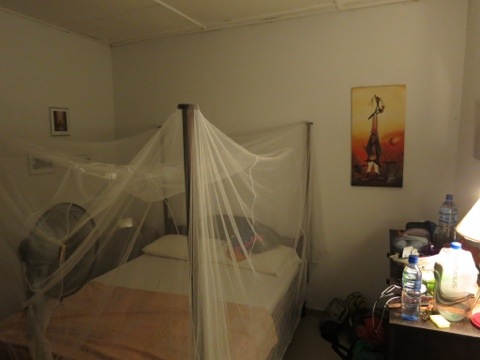 A wonderful breakfast of baked oatmeal and fresh mango. 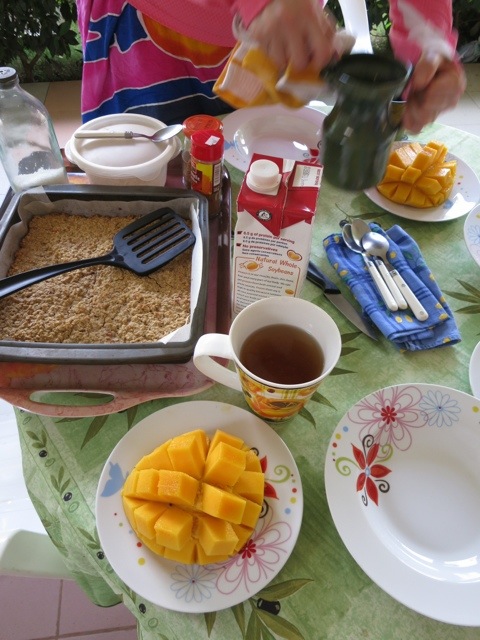 Zem ride to pick up the truck and visit the missionary family in the next village. 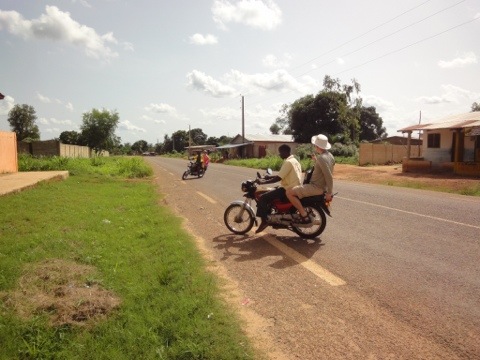 Buying fabric so that we can have some African clothes made. 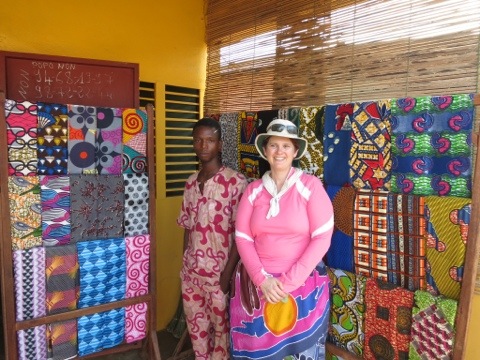 Animated conversation at the lake restaurant. 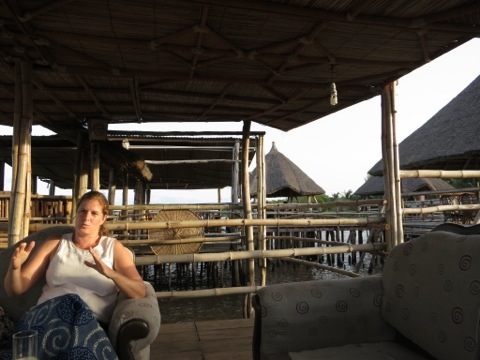 Our dinner table at the stilt restaurant. 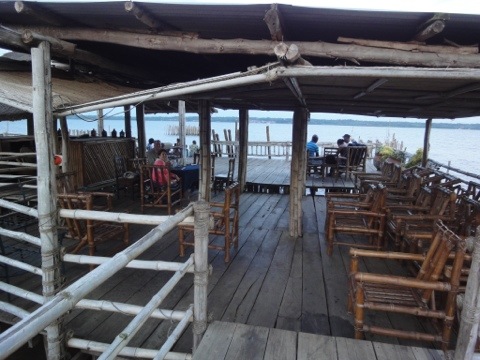 A fisherman as seen from the stilt restaurant. 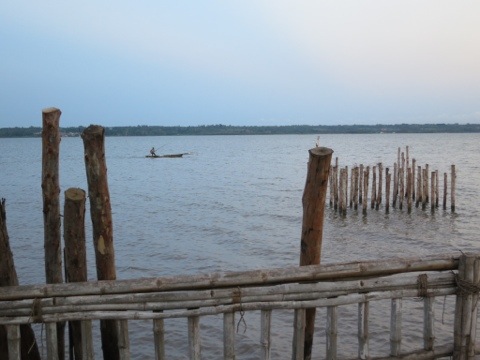