With the conference over, we accepted an opportunity to visit Marianne in a village 90 km outside of Cotonou (northwest, near the Togo border). Conveniently, she was in Cotonou for other reasons, and we were able to share a taxi back with her to her home. Few people in Benin own cars, and there is no public transportation system, so most travel between cities and villages is via “bush taxi” – usually an older car shared by up to 6 passengers (4 in the back seat, two in front, plus the driver). In our case, Marianne had rented the whole taxi, so there were only three of us – much more comfortable.

Along the way, we passed through Ouidah, and took the opportunity to visit the Walk of Slavery and Gateway of No Return monument, but first we stopped at the Jardin Brésilien restaurant for a wonderful lunch of French / African cuisine.

Benin, formerly Dahomey, was central in the slave trade with the new world, and Ouidah was one of the major locations where slaves were gathered and shipped to the Americas. Close to 1,000,000 people were enslaved, brought to Ouidah from all over Africa, and traded to the West for goods and weapons. There is a brief explanation by a BBC correspondent about the site, which implies that white slave traders went into West Africa to gather slaves, but from what we understand slaves were mostly gathered during conflicts between the various warring kingdoms, or traded between African kingdoms, and the Spanish, Portuguese, French, Dutch and British were a convenient new market for these slaves.

The Lonely Planet and the other tourist sites make Ouidah seem like more of a tourist attraction than it seemed to us. To be fair, we did skip the Musée d’histoire de Ouidah which is supposed to be quite good.

We drove rather than walked the 4 km “Route des Esclaves” down to the beach, and looked at two of the monuments, both the “Porte du Non Retour”, typically translated as “Gateway of No Return” and a monument to the French and Spanish missionaries who brought Catholicism to Benin in the 1860s. It is an interesting juxtaposition, with the two monuments on either side of an old seaside fort. We walked from the one monument to the next along the beach, and were able to see the old fort. It appeared that someone recently decided to replace the windows in the out buildings of the fort – perhaps with the thought of turning it into a hotel. The whole idea of staying at an old slave fort as a hotel is rather disturbing to us, but some people would do it. 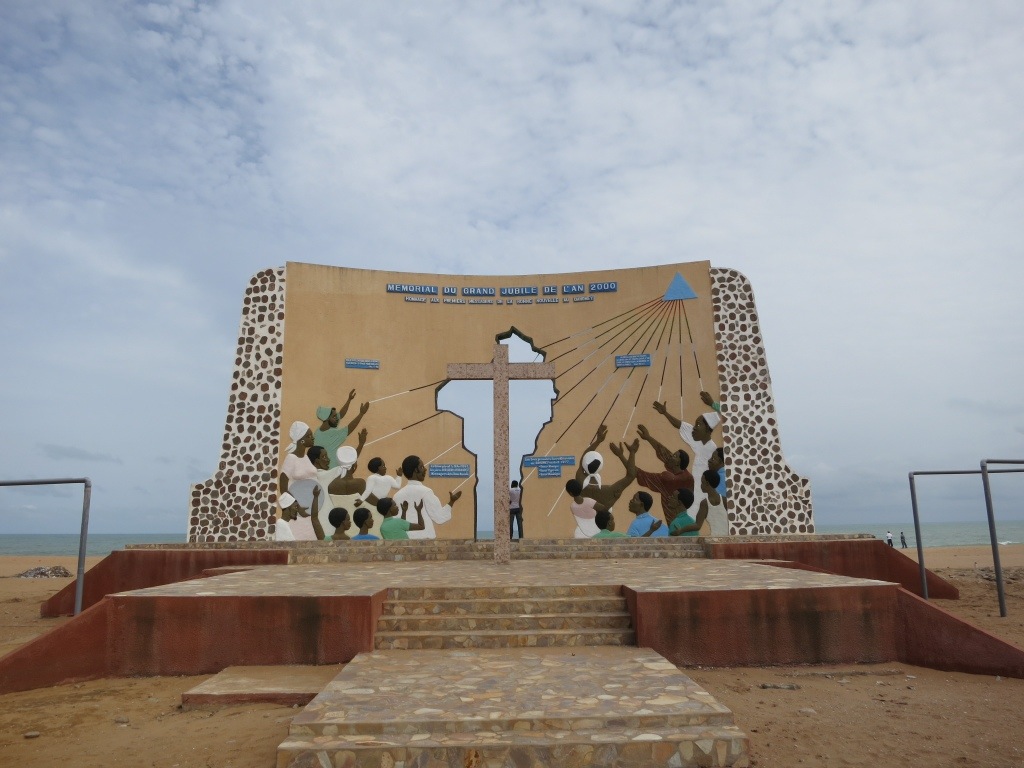 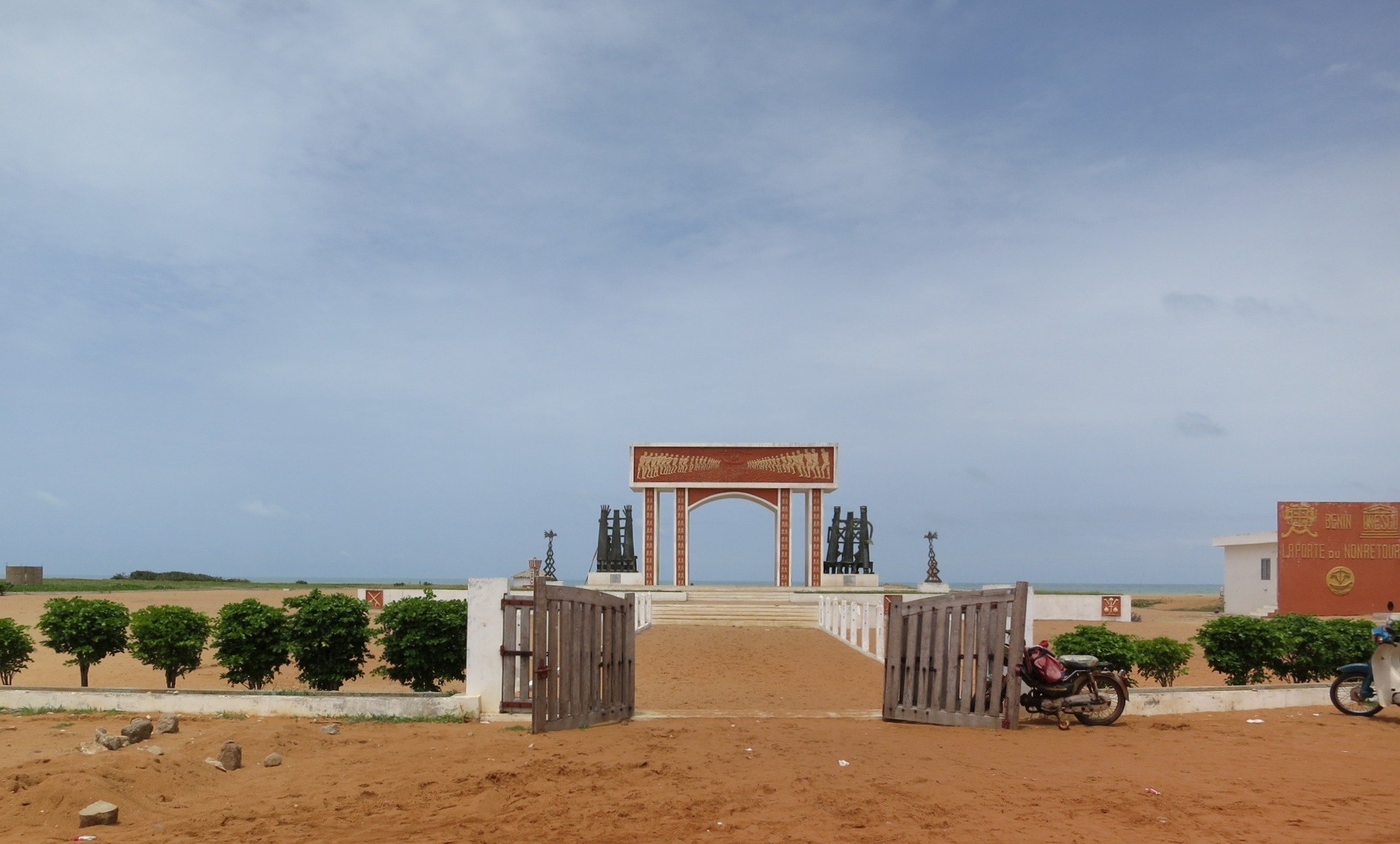 We also stopped at a monument commemorating the “Tree of Forgetfulness”, a tree slaves would be forced to circle in a Voodoo ceremony which was intended to cause them to forget the land and customs they were leaving. There are a variety of other Voodoo fetishes and monuments along the Route, but we didn’t take the time to learn about all of them. Ouidah is one of the centres of Voodoo (or vodun in the original Fon and Ewé languages) in Benin and Togo, and Voodoo is a formally recognized religion in Benin. 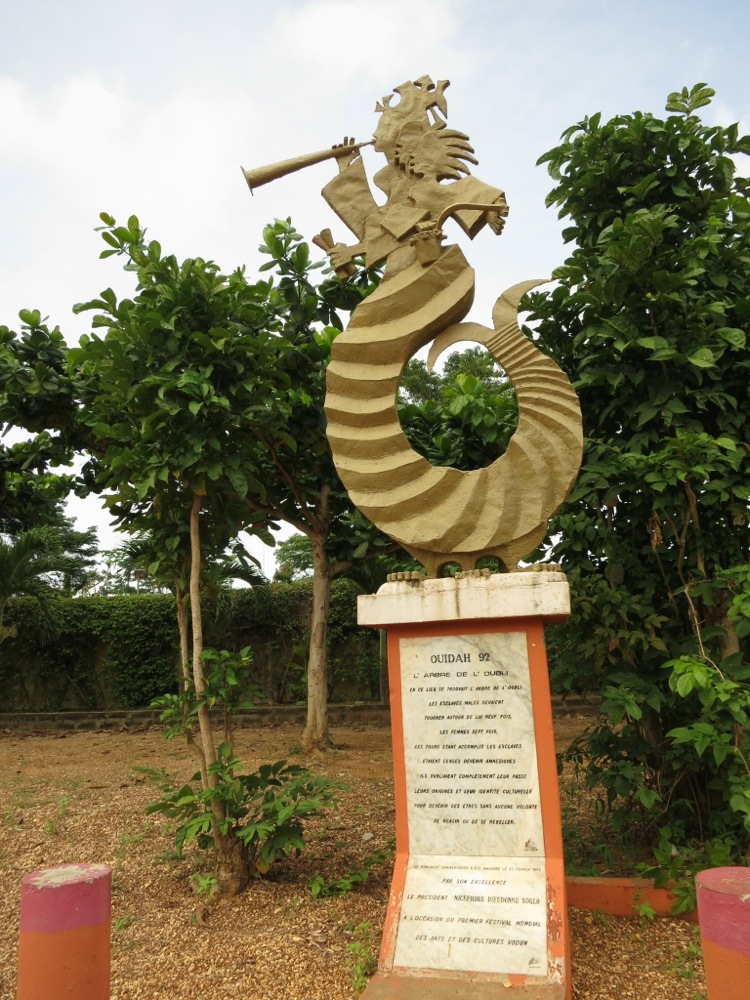 Monument to the Tree of Forgetfulness

This is an area of world history that neither of us know much about, and yet it is a very important chapter in the histories of both Africa and the Americas. It is also a history that many people have tried to ignore. These monuments are quite new – 1992 and 1995, and we are happy that people are now paying more attention. Apparently there is also the Door of Return a monument which we didn’t see, constructed to welcome the descendants of these slaves on their return to their ancestral homeland.

1 thought on “A brief visit to Ouidah”