Our day began with the discovery of a flat tire on the truck we had borrowed, so we added fixing the tire to a list of chores for the day (along with washing the fabric we bought yesterday, so that it can be dried and hopefully sewn someplace else along our journey). It is our last full day in Benin, as our visas expire tomorrow. We are just starting to feel comfortable here, and are sad to be leaving so soon.

Whilst doing our morning chores, we also discovered that Marianne’s house helper, Irene, is sick. Since there is no health insurance here, employers often take on the responsibility of caring for their employees. Ethically, Marianne takes on the responsibility of ensuring those she employees have access to healthcare when necessary. So, we added a trip to the local health clinic to our afternoon plans.

The local private clinic is run by a nurse named Didier, who seemed more like what we call a nurse practitioner as he was able to write prescriptions and order lab tests. When we arrived in the waiting room, we were quickly shown to his office. We expect that Irene would not have received the same level of service had she arrived on her own. Part of that was probably three Yovos (white people) showing up at the clinic, but it also helped that Marianne was learning the language and already had a strong relationship with the nurse and his family – much of West African society seems to run on relationships.

Didier wasn’t in when we arrived, but he was called and arrived within a few minutes. He asked Irene many questions and was able to do a preliminary diagnosis based on her symptoms. He suspected typhoid and malaria. He ordered tests that would be run the next morning at the state clinic, as they only do tests in the morning with results available the same day. He also ordered a treatment of medication for the typoid and malaria since both are seriousness enough illnesses to warrant immediate treatment. The cost of the visit to the clinic was 500 CFA (about $1).

After the clinic visit, Irene went home to rest while we went to the pharmacy to pick up her medication. The cost of the medication was 4500 CFA (about $9) plus the cost of the malaria medication, which the pharmacy didn’t have but Marianne happened to have picked up a box when she was in Cotonou. This would be a huge cost to a local and therefore many seek out the cheaper traditional medicines.

After the stop at the pharmacy, we walked through the back roads of the village back to Marianne’s place. This allowed Marianne to greet people in their local language while we got to observe another aspect of village life. We walked through one compound and were granted permission to take pictures. The father of the house was very proud to show us his pigs. The children giggled and laughed when we showed them their pictures on our digital camera. One blind grandfather requested that we take his picture too. It was an amazing experience that felt quite surreal – a bit like being inside a National Geographic magazine! Since this was a minor trail, we may very well have been the first Yovos these children had ever seen visiting their home. We will print a bunch of the photos when we get home, and send them to Marianne so she can share them with the people we photographed. 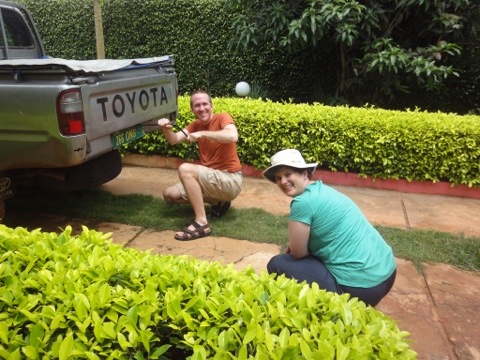 The waiting room at the clinic. 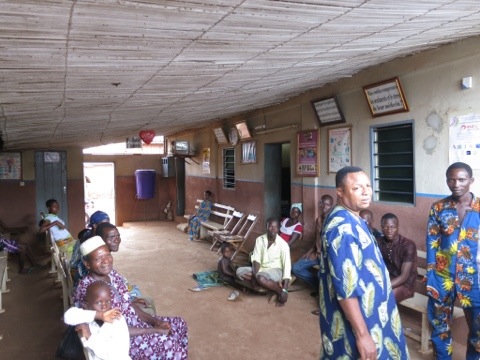 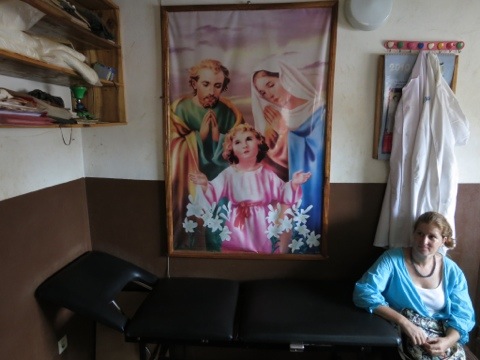 At first the little boy was so afraid of us, that he ran and hit in the house. On the right is the blind grandfather who requested that we take a picture of him.

Another family within the compound. The mother did not want her picture taken, but the kids were happy to pose for a photo. 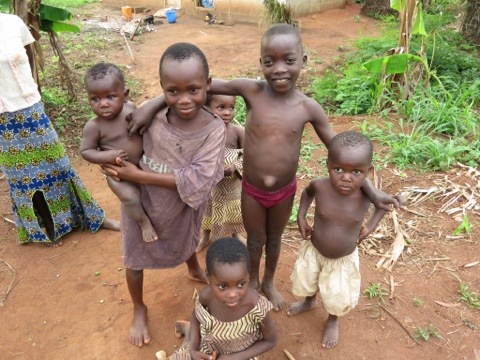 The kids that followed us as we walked through the compound. 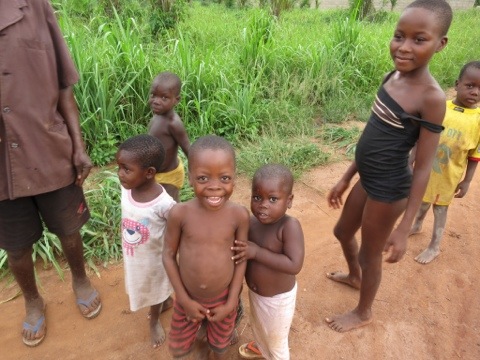 Waving goodbye as we reached the end of the compound. 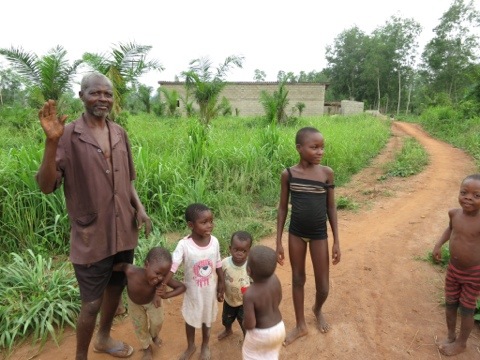