We left Saskatoon on cool cloudy day with the wind blowing from the North. This meant that the ride out of Ancient Spirals felt like it was all uphill – amusing that the ride to Ancient Spirals also felt all up hill. Once we turned onto the road that would connect us to the Yellowhead Highway (highway 16), the winds helped us along and we made good time. After highway 11, the road turned from a paved road to a dirt farm access road. Fortunately, the road was smooth and the ride was rather pleasant.

The Yellowhead had nice shoulders for riding, but it didn’t take long for Scott to get annoyed with all the traffic. He was definitely looking forward to when we would turn off the main highway and re-enter the world of smaller, less trafficked highways. The main benefit to riding on highway 16 is that all the small towns on the map actually exist and most of them have some form of services (unlike on the minor roads) – usually a motel, gas station, and corner store.

We stopped for the night at the Painted Rock campground, 7 km west of Colonsay. They had really nice free hot showers (tenting sites $17.50). The sign indicated there was a store with some basic foods; however, this turned out to not be the case, fortunately, we were carrying dinner and breakfast. It is a nice place to camp, but if you are planning to stop there, make sure you have enough food with you or be willing to ride into Colonsay to stock up and then backtrack.

The next morning, we had a short ride along the Yellowhead before we turned onto Highway 2 towards Watrous. We soon passed a Potash mine where the tailings actually looked like mountains behind the plant. From the mine all the way into Young (about 20 km) there were rail cars sitting on the track – we later discovered they were grain cars, likely in storage until harvest time. We were to see many more kilometers of resting grain rail cars.

One interesting aspect of traveling on the smaller highways is the traffic with which you share the road. Several times a day we are passed by “wide loads”. Mostly they are new grain storage silos, but occassional they are more interesting. At one point we needed to move completely off the road to allow a house to get by! 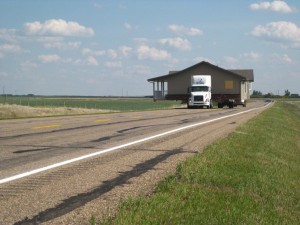 Just past Young, we stopped for a snack and were greeted by Jenn and her daughter Jillian – friends from Ottawa who moved to Regina last summer. They went on ahead and waited for us in Watrous. Just as they were leaving, Becky could see scary clouds in her rearview mirror. We needed to get moving or we would be caught out in the rain. Fortunately, the wind was at our backs so the ride into Watrous was fast. About 10 km outside of Watrous, Scott pointed out the clouds to the North – we could see the formation of several funnels dipping below the layer of dark clouds. Becky snapped a few photos while pedaling at 30 km/hr (very fast for us). We managed to get to the restaurant only shortly after Jenn and Jillian (15 minutes before our ETA). 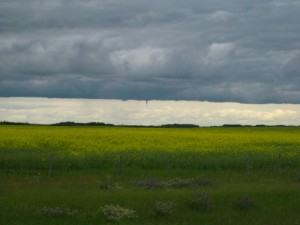 After lunch, we rode over to the Sunset Motel and booked ourselves a room for the night ($65). A bit of an indulgence, but this gave us a place to leave our bikes, so we could hop into Jenn’s car and go check out the Mineral Baths in at Manitou Beach – the largest indoor mineral baths in Canada. We first heard of these Mineral Baths via a comment left on our blog – thanks Brian. The water was not as warm as we would have liked (we were reminded our of the mineral baths in Iluca Turkey), but the baths were certainly entertaining. The mineral content was so high that you were buoyant, almost to the same extent as the Dead Sea. You could walk off the edge in the deep end and not sink. Unfortunately, the salt content also irritated some of Jillian’s and Becky’s tender parts – so our soak did not last too long. 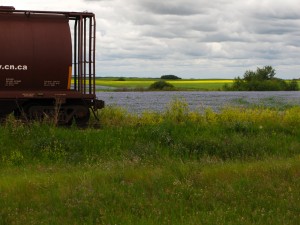 A grain train car with a field of blooming flax in the background. 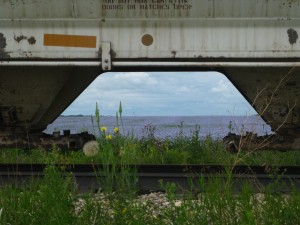 Looking into a sea of blue – flax blooming in the background under a rail car. 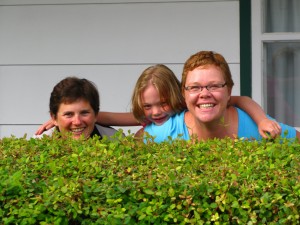 Becky, Jillian, and Jenn hiding behind a hedge. 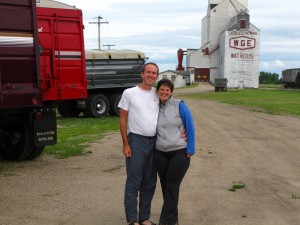 Scott and Becky in front of some fancy new grain trucks and the Watrous grain elevator.