Visiting Chandra and Clem’s farm in Kerrobert was fascinating. We had visited our organic CSA in Ottawa, but that was more like a large garden than a farm. Chandra and Clem’s farm was one of the first farms in the area to convert to organic. The transition was initiated after an accident meant that they were washing chemicals out of the eyes of one of their kids. After that incident they realized that they did not want any more to do with chemical farming – the dependency on chemicals in traditional farming is incredible – they use chemicals to fertilize, chemical to weed, chemicals for pest control, and then chemicals to desiccate (that is to kill the green part of the plants to make harvesting easier). The farmers need to pay a fortune for all these chemicals, which raises their fixed costs for each acre they farm. If a crop fails, or even if yields are low, they will take a significant loss. Organic farmers only need to pay for their seed stock, and they can sell at a higher price. Farming organic may mean less chance of a bumper crop, and require more attention to the land and what grows well there, but the lower fixed costs result in less overall risk.

On our drive around the farm, we learned to recognize canola (the bright yellow flowers, which are actually a weed to the organic farmers, since most are GMO), wheat, barley (which looks like fuzzy wheat), and flax. The flax is especially beautiful in the mornings while it is still in bloom. The flowers are a deep blue that make the fields look like lakes from a distance.

Our departure from Kerrobert was later than we had hoped, but we don’t regret for a second the time we spent there. After our tour of the farm, Clem gave us a ride back into town where we stopped at the Bakery for a wonderful lunch – sandwiches on homemade bread and fruit smoothies. When we stepped up to the cash to pay, we discovered that Lois had paid for our lunch! Thanks Lois! Fortified for our ride, we hopped on our bikes and began the slog to Biggar. It turned out to be slog as the wind was directly against us and the road was still in pretty bad shape – the road was nice for about 10 km outside of Kerrobert but then quickly degrade to the grooved and potholed highway that was more typical of highway 51.

We had been warned about deep valley (called a coulis/coolie by the locals), which is an ancient river valley (there was no river anymore), between Kerrobert and Biggar. Unfortunately, the wind slowed us down so we couldn’t enjoy too much of the downhill. The climb was not minor, but with fresh memories of Sunwapta pass, we did not find it too taxing. 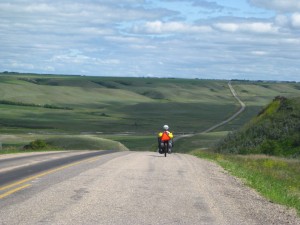 Scott riding into the prairie valley.

We arrived in Biggar and enjoyed their amusing welcome sign “New York is Big, but this is Biggar”. There are two campgrounds in Biggar – a private one and a city campground. We found the private one first as it was right at the highway 51 intersection. It was an OK campsite, but a bit expensive for what you got ($20). The sign said “Shower” not “Showers” and they were not kidding. They had a small trailer with a single bathroom (toilet and shower). Fortunately, there were only a few campers, so we did not run into conflicts too often.

In the morning, for the first time since we arrived in Saskatchewan, we had an east wind. It was like someone was looking out for us and knew we had a long ride into Saskatoon. The wind pushed us most of the way there, and we averaged over 25 km/hr for the ride into Saskatoon. Arriving in Saskatoon was culture shock. There were so many places to eat that at first we were unable to choose. There Becky saw a Vietnamese restaurant – perfect! Then we saw the sign “closed July 30-Aug 8 for vacation”. Very sad. Now we were fixated on Vietnamese food, which could have been a challenge. A quick search on the GPS showed no other restaurants with “Viet” in the name. We followed the bike path signs toward downtown, and just as we were giving up, the Saigon Palace appeared at the top of the restaurant list. Must be Vietnamese we said. When we arrived, it was called the Royal Thai and served Thai/Lao/Vietnamese food, with an excellent Thai buffet! It was wonderful to get a good fix of ethnic food.

Of course the wonderful east wind that blew us into Saskatoon made the 20 km trek out to Ancient Spirals feel like the ride was uphill all the way. The weather was starting to look threatening, so we pushed through it.

We stayed out at Ancient Spirals Retreat, which was the location of Jodi and Cameron’s wedding and several of the associated events. It is a pretty spot overlooking the Saskatchewan river and many farmers fields. They have a couple of spiral shaped labyrinths – a small one in the back yard and a large one a little further out back. Unfortunately, we never did get a chance to check out the larger one, given that the mosquitoes were still pretty vicious, we think that was for the best.

Between the wedding events and the chores we needed to do, we were kept rather busy during our three days, four nights in Saskatoon. We met some pretty fantastic people and enjoyed our time, but were also glad to get back on the road. 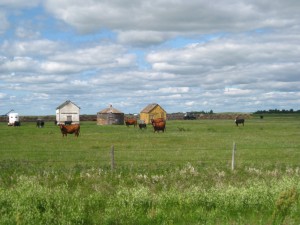 All the cows turn to look at us as we ride by – very odd. 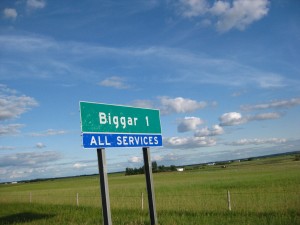 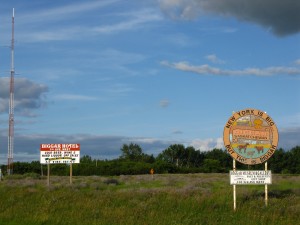 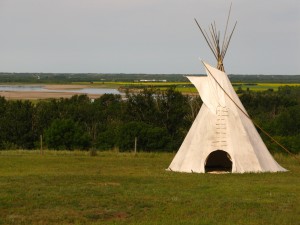 View from the back yard at Ancient Spirals.