When we finally crossed the border into Saskatchewan, we were disappointed at the lack of a “Welcome to Saskatchewan” sign. This is the second time in recent memory that we were looking for a photo op that turned out to not exist! Oh well. Although we did not get a formal “Welcome to Saskatchewan”, it did not take long for us to notice how much friendlier the people were. In less than an hour, someone pulled up to talk to us while we were riding, and another person pulled over when we were stopped to make sure we were OK. It was almost like we entered a whole new country!

The other immediate difference was the road. You could see the provincial boundary based on how the nice road turned to crap once we hit Saskatchewan. One of the locals told us that Highway 51 was once listed as the worst highway in Canada. It no longer has that honour only because it is now “under repair”. Unfortunately however, the repair work was very minimal when we passed. There were places where the road was down to one lane because the other lane had eroded so badly and other places there the grooves were ten to fifteen cm deep. We figure it is likely to cause anything without a high clearance to bottom out. 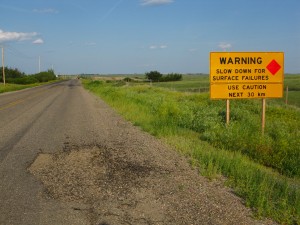 At least they admit it isn’t a great road.

We had hoped to make it to Kerrobert for our first night in Saskatchewan, but the road conditions and the north wind put an end to that plan. We also got a bit stuck because there were no services along the highway between Consort and Major – and it being a Sunday, most of the stores in Consort were closed. We pulled into Major at 7 pm very short on water. There were a few farmsteads close to the road where we probably could have got some, but we held out hoping for The only thing open in Major was the “OK Kafe” and the attached “OK Tavern”. We stopped into the Kafe and Jerry, the owner, made us a two wonderful hamburgers – perhaps the best burger in Saskatchewan, and certainly the best one we’ve had in ages! His brother owns a feed lot only 3 km from Major and they pasture a few of the best cattle for personal use – and use in the OK Kafe. It was wonderful to taste some real grass-fed beef again.

Another couple who entered the restaurant offered to give us a ride to Kerrobert given the late hour. We declined hoping to find a closer place to camp, and continue with our goal of riding all the way across Canada. Later, Jerry kindly offered a spot in the yard behind the cafe and allowed us to use the showers at the OK Inn (next to the cafe). Given that we were beat and there was no way we could make Kerrobert before dark, we happily accepted his offer. We were delighted at such hospitality our first night in Saskachewan, and enjoyed a delicious breakfast the next morning too. 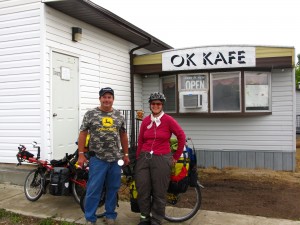 Jerry and Becky in front of the OK Kafe

If you’re ever passing through Major, stop in and say hi to Jerry – tell him the folks from Ottawa on the funny bikes sent you. 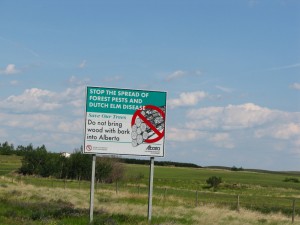 One of 6 or 7 “Alberta Commandments” displayed at the border. Others include: “Think Safety – safe driving starts wtih you!”, “Speed fines double when workers present”, “Alberta Checkstop: What are you willing to lose”, “60 kph limit when passing stopped emergency vehicles” 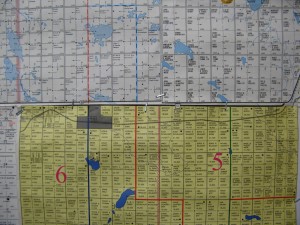 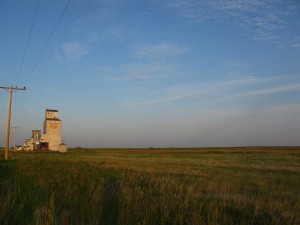 3 thoughts on “Saskatchewan didn’t welcome us, but the people did!”