Since we were riding through Bentley we made a brief stop at the Bentley Bike Shop. Someone we talked to on the Icefields Parkway mentioned that the Bentley Bike Store sold recumbents and trikes. Upon entering with our loaded bikes, we had a nice chat with the folks at the store, but declined the chance to testdrive the various bikes and trikes they had in stock. Scott used that opportunity to have his headset looked at, and in the end decided to replace the bearings, even though they weren’t nearly as bad as Becky’s. The shop is family run and we had a chance to meet one of the sons and his mother. If you live in Alberta and are looking for a ‘bent, this might be the shop for you! 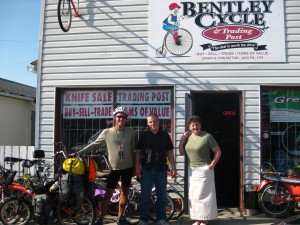 The folks at the Bentley bicycle shop.

Riding along highway 12 has turned out to be wonderful. Once the highway turned a little south (just past Alix) the road flattened out, allowing us to pick up our pace considerably. Most of the highway has had a shoulder wide enough for us to ride beside each other, so we spend our days actually talking to one another! In addition, all the drivers have been great – even waiting to pass us when there was no shoulder and we were riding on the road. We wonder if this is because of the local familiarity with slow moving vehicle signs which are also displayed on farm vehicles. So far, there have been enough services nicely spaced to ensure that we haven’t gone hungry or without a campsite (although, be aware many of the grocery stores in the small towns are closed Sundays and some on Mondays too). It does look like the last stretch from Veteran to Saskatchewan might not have too many campsites – we’ll see.

Our first night without Becky’s parents was spent camping at the basic lower campsite at the Mitchener Campground in Lacombe ($15). The attendant allowed us to use the showers in the upper RV campsite; however, it was a fair walk from the lower site. The sites were situated in a depression around a pond and field with very little privacy. Since it was a weekend, the campground was surprisingly busy with lots of kids playing in the field and play structure.

In the morning, we were picked up by a friend of Scott’s from high school, David Jeffery, and brought home for a lovely breakfast. Scott had not seen David since they left high school – so almost 20 years. It was great to visit with him, catch up, and meet his wife and newborn daughter. His parents are also in Lacombe, so we had a brief visit with them before they left for church. It was especially nice to see his mother, since she worked with Scott’s mother for many years before retiring.

Our second night we camped at the Lion’s Club campground ($8) in Stettler. Many small towns in Alberta have some form of community campground. Some even have services for RVs. The one in Stettler had everything including free showers. The campground operated on an honour system with no attendant – you just put your fee in the envelope and put it in the slot. Since we did not have a vehicle, we picked a spot in the overflow area consisting of a field with picnic tables strategically placed to be shaded by some small trees. It was rather pleasant.

Our third night we again camped at a the Lion’s Club campground ($7), this time in Veteran. The small campground had a nice cooking shelter, pit toilets, and full hook-ups for RVs. Half of the campground was filled with fifth-wheel RV trailers who are here for the season. We later learned they are a crew of welders and fitters working for putting in a new pipeline between the Alberta Oilsands and Oklahoma. With the downturn in the economy, there was some question as to how much longer the project would be running. Between that and a number of engineering screw-ups outside their control, they definitely seemed to have a lot of spare time on their hands while they waited for a decision to be made. Since it was Sunday night, it was breakfast night. This seemed strange until they explained. Since they all start work so early, they don’t get an opportunity to eat a large breakfast,
so one night a week they cook up a large breakfast feast instead of normal dinner fare. Our just-add-water rations for the night (Alpineaire beef stroganoff and Natural High BBQ chicken and rice) turned out to be much less appetizing (actually they were exceptionally bad)! Fortunately, they had some leftovers, so Becky enjoyed some pancakes with real maple syrup and some yummy fully salt bacon! 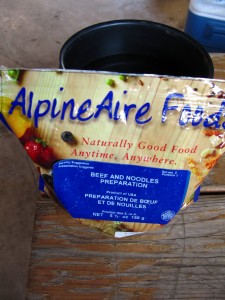 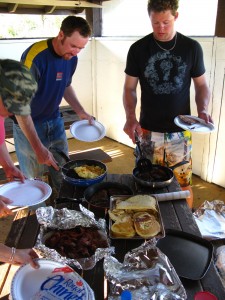 A great breakfast feast for supper – good thing they had some leftovers!

As the land flattened out, we were struck by the beauty of the deep green fields with the bright yellow accents provided by the fields of canola. At our first sight of the bright yellow fields, Becky was reminded of her family’s semi-annual trek from Kitimat to southern Ontario. The yellow fields will always represent the prairies in her mind. As we have moved east and a little south, we noticed the transition between very deep green with bright yellow accents to brown. The eastern part of central Alberta is experiencing a drought, such that the first hay crop failed and the second is threatening to do the same. 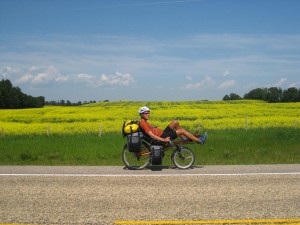 Scott riding infront of a field of canola.

Next to the campground in Veteran is an auction house. Every Monday, cattle are auctioned off. According to the folks we talked with, the drought in Alberta has increased the price of hay by so much, many farmers are actively culling their herds, and selling more cattle than they normally would. Since we arrived on Sunday, we had the pleasure of hearing the cattle to be auctioned off arriving and trumpetting their distress throughout the night. We were both amazed at just how much the cows sound like out of tune trumpets sounding off. Surprisingly enough, we were both still able to get a decent night’s sleep.

Riding into Coronation, an older guy in a pickup with a camper on back and a strong ranch accent, yells out his window to Becky:

“Is that easier than doin’ it regular?”

That one certainly provided us with a chuckle!

We are finding our interactions with Albertans to be mixed. Several times we have entered stores or restaurants to cold expressions, odd stares, and poor service – this usually occurs when we stopped in restaurants or at corner stores in the small towns we are in at lunch time. Yet, when people approach us to talk about our bikes or our trip they are very friendly. To Becky, it almost feels like we are in another country. We are finding that we don’t understand people’s behaviours and often find ourselves leaving towns saying “That was really odd”. 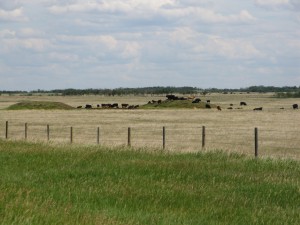 Cows climbing all over these man-made hills in the middle of the pastur. 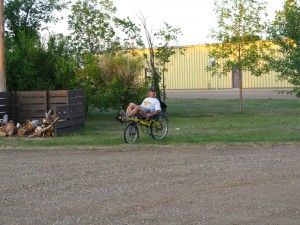 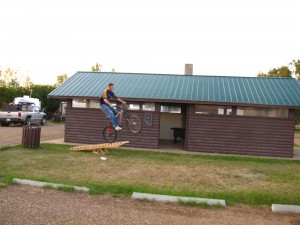 One of the TCP guys showing off on his bike.