Just for fun, this post has been written in a completely different style, inspired by a famous Canadian storyteller … can you guess who?

While my husband and I were riding our recumbent bicycles – the funny looking kind where you lay back like in an easy chair only you still need to pedal – around the world and across Canada – that is a different story, which is much too long to tell now – we stopped in a little town in Central Saskatchewan for lunch. Kerrobert, spelled K-E-R-R-O-B-E-R-T but pronounced KRAW-BET, has a booming population of 1001. It was the first “big” town we came across since leaving Alberta and is the center of activity in the area, with a grocery store, bakery slash cafe, hotel, and library. It was the library that drew our attention. You see, it is the library where, no matter how small the town is, anywhere in Canada, you can find computers with access to the Internet. So, it was the library we were seeking when we arrived in Kerrobert.

We rode up to the library on our funny looking recumbent bicycles at 1 pm. Unfortunately the library was not open until 2 pm, so we had to find a way to occupy ourselves for an hour first. We decided to go and find a picnic table and have lunch. As we discussed our options, we were met on the street by the “Walking Lady”. She was an older lady, who said to us “I had a bicycle, but now I walk … I’m going to walk” as she walked away from us.

Seeing us stopped, a gentleman from Compeer – a small town at the Alberta border marked by great towers of hay bales, that we dubbed straw henge – stopped to say hi. He had seen us riding a few times in the last couple of days and commiserated over the poor condition of highway 51 – which is dramatically emphasized when leaving the really nice roads in Alberta. When you reach the border, the road immediately deteriorates – first it changes to unlined chipseal and then to pavement with lane wide pot holes and 15 centimeter grooves – which felt more like riding on a mountain biking trail than a highway – amusing for a while but definitely reduces how far we can ride in a day. He told us that highway 51 was once listed as “the worst highway in Canada” but has since lost that label because it is “under repair” – although we had not seen any evidence of said repair. He encouraged us to write a letter to Bill Boyd, the MLA for the area letting him know our thoughts on the state of that road. 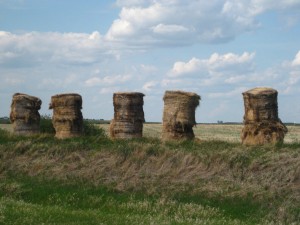 We still had no lunch, but fortunately another feature in small towns in Saskatchewan (and indeed, across Canada) is the hockey arena – and behind the hockey arena was a nice little park with a picnic table – exactly what we needed to make our lunch. We made a quick noodle soup for lunch and as we were cleaning up the “Walking Lady” came by again. She was still walking, but had lost her way. We pointed her back in the direction of downtown and off she went walking again.

Happily, the library was now open – it was a small one room library – kind of what you might expect for a town of 1001 people, but not really accounting for all the folks in the outlying areas that also use the library. We asked about computers and Internet and were pointed to a couple of old and really slow machines – like the kind we used back in the 90’s – just good enough to check email but not much else. They did have wireless, so we tried to connect our computer only to learn that it didn’t work. Now don’t get me wrong, we are grateful for the Canadian Government for the program that ensured that all public libraries in Canada have free Internet access, but it would also be nice if they also occasionally ensured that the computers were updated too – anyway the wireless did not work, so my geeky husband – and I mean that in the most affectionate and loving way – offered to be of service and try to fix the wireless. Unfortunately, after much poking and prodding, we still had no wireless.

Of course, while we were working on the computers people would come into the library – mostly curious kids and mothers with their young children. Each time someone new entered, we overheard – in the hushed library type voice – “Did you see those bikes out there? Cool!” It wasn’t long before my husband was talking to the librarian and a few of the folks visiting the library about our journey cycling across Canada and travelling around the world without airplanes – as I said before, that is a much longer story. Curious about us, the friendly librarian, whom we later learned was named Chandra, invited us to her place for dinner and to spend the night.

My husband came to tell me about the offer of hospitality while I was slowly updating our blog using a library computer. We had to discuss the idea because we wanted to be in Saskatoon on Thursday in preparation for a friend’s wedding and it was already Tuesday. Stopping in Kerrobert would mean the next two days would be long cycling days – but how could we possibly turn down this offer – this was why we were travelling by bicycle – because it gives us the chance to meet real people and take advantage of serendipity when it happens. The whole idea of spending a night in what was likely to be a real farm house was just too cool for us to turn down.

So we hopped on our bikes and headed out to Chandra’s place – now this was a little bit more of a journey, as farm houses are generally out at the farms, which means they are not in town. Once we turned off the main highway, the road turned to dirt which slowed us down. The issue with slowing down on this particular day was that the mosquitoes were ferocious. We couldn’t stop for 5 seconds without being swarmed. Forty-five minutes and 15 kilometers later, we were pulling up to the farm that we hoped to be hers – there were no signs, but it was the only farm anywhere near where we thought she had directed us. Knocking on the door, we were quickly greeted by Chandra’s son and then Chandra and Lois – the assistant librarian, whom we also had briefly met at the library.

We were quickly ushered into the house and safety from the voracious mosquitoes. Upon arrival, we were shown a room that would be ours for the night! We were utterly delighted – you see, we normally sleep in our tent and were expecting a place on the lawn to setup for the night, so a bed was a welcome luxury. Before dinner we enjoyed a warm shower with fluffy cotton towels – a welcome luxury, since is too bulky and doesn’t dry fast enough, but quick-dry microfiber not just does have that same welcome home feeling!

Clean, warm, and content, we sat down around a large wooden table to a wonderful home-cooked meal – a salad made with lettuce and dill from Chandra’s garden, sausage made by a local farmer using his secret recipe, and ice cream with a perfectly tart home-made berry sauce.

Throughout dinner and dessert – which lasted for several hours – we shared stories about our travels and our lives. Chandra, in addition to being the local librarian, is also a busy mother of three boys, and she manages the books for the family’s 2000 acre organic farm. We were fascinated by the farm – neither of us having spent any time on a real farm before. We had visited our local organic CSA but it was more like a large garden – this was a real production farm.

As we chatted, we learned that Lois is a woman of many hats. Not only is she the assistant librarian, she is also the Pastor for the Superb Mennonite Church. Now it isn’t necessarily that the church is superb, although it might be, but that the church is located in the tiny town of Superb, which we thought only had a grain elevator, so we were surprised to learn that it also had a Mennonite church with an active Congregation. However, it doesn’t have a library, which is why Lois was at the library in Kerrobert when we stopped by.

In the morning we awoke to the smell of fresh coffee and a wonderful breakfast of eggs, fruit, and toast. The toast was amazing – Chandra ground the flour herself to make the freshest and fullest home-baked truly whole wheat bread we have ever tasted – it was a special treat to know that the wheat was actually grown on the farm and processed in the kitchen of the farmhouse – one could call it the 3-mile diet!

Before we left, we accepted the offer of a tour of the farm, narrated by Chandra’s husband Clem, who does most of the farming, ably assisted by the three boys. Fortunately this was done in the family minivan and not on our bikes or it would have taken us all day – the roads surrounding the farm are all gravel grid access roads, some in better condition than others – and we would have been eaten alive as the mosquitoes were still out in force. We saw the awesome and scary large machines used to seed, till, chop, and process the crops – and were impressed that the boys start driving the machines in their early teens – the cabs are air conditioned, so they spend their time tilling or combining in cool comfort listening to their ipods… until things get clogged up, then they need to hop out into the sweltering heat and fix it. Apparently they learned quickly to drive slowly and avoid problems.

We toured and learned to recognize wheat, barley, and flax – all a little short this year due to the shortage of rain early in the season – but there is still hope that the heads will fill and the crops will still produce at least 50% of their normal growth. We stopped to see the lentils, which were still really small and can be difficult to harvest because they are so low to the ground, and peas – a favourite of ours and fortunately some were just right for picking as a yummy afternoon snack. In the days to come, we would be extra thankful for our tour as we now could recognize the fields of grains as we rode by – the flax being particularly beautiful with its blue blossoms often giving the impression of a lake ahead rather than a field of grain.

Unfortunately, all good things must come to an end and our bikes, the open road, and Saskatoon were calling us. We said our good-byes but will always remember the generosity of one particular librarian in Kerrobert Saskatchewan! 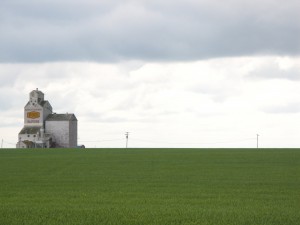 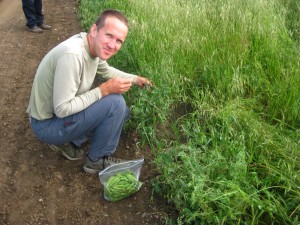 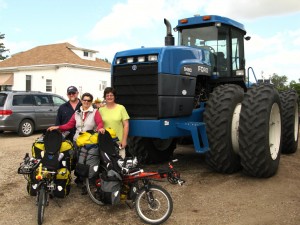 Clem, Becky, and Chandra in front of a giant tractor. 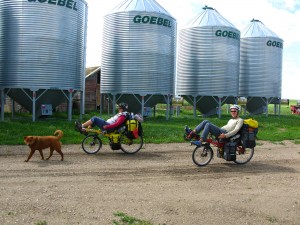 Becky, Scott, and the family dog giving a demonstration of the bikes.

2 thoughts on “An adventure in Kerrobert”