Cycling on Salt Spring and Southern Vancouver Island, we were immediately aware of many other cycling tourists – more than we have seen on any other segment of our trip. On the Salt Spring ferry, we met a family that that was cycling a circle route from Seattle to Victoria, Salt Spring, Crofton and then back. We were amused at how we talked about the weather – another signal to us that we are home. In places where the weather doesn’t change from day-to-day (SE Asia and the Middle East) there just isn’t anything to talk about.

Speaking about weather, we have been exceptionally lucky so far. We had rain for about 2 hours on Sunday morning, which started after our tent was packed up and our breakfast eaten. It did not last long, and by lunch we had removed all our wet weather gear and were happily cooking in the sun. Some scary clouds moved in several times, but always floated over us, leaving us happily dry. We can only hope the nice weather holds for our ride through the northern stretch of the island.

As we ride, we are feeling invisible here. Fewer people find our bikes “special” and there are so many other touring cyclists that the idea of travelling by bicycle isn’t too strange. When someone does express an interest in our bikes, the conversation is definitely more in depth, which we are sure is related to speaking the same language! We do find ourselves acting in the role of recumbent evangelists, elucidating on the benefits of cycling recumbent style.

We are struck by the beauty of the landscape in BC. In the mornings, we look out over the Straights of Georgia and the mountains in the distance make many layers of blue. We were reminded of riding in Labrador and the hills making many layers of green – similar but with a different colour palette.

As Becky was shopping for groceries in Parksville, Scott was visited by Al, a 79-year old cyclist, who proudly calls himself a bicycle evangelist. He does not own a car and travels everywhere either riding his bike or walking. He rides between Bowser and Parksville almost every day, 30 km in each direction: that is an impressive ride for anyone regardless of age. He was interested in our bikes, but after talking further, decided that he was happy with his mountain bike – no need to investigate recumbent bikes until he gets a bit older.

The campsites in Qualicum Beach were all charging $26 plus tax plus $1 each for showers, which we thought was a bit much for a place to put a tent for a night, especially after paying $26 at the ‘4 all seasons resort’ in order to do laundry, only to find all their washing machines were out of order. We rode on, and found a beautiful campsite at the Qualicum Indian Reserve – $19, so still expensive for us, but clean and with a beautiful view of the Straits of Georgia. We need to break free of the campgrounds and do some wild camping again, or approach random strangers and ask to stay on their lawn if we want cheap accommodation. We haven’t quite brought ourselves to do that yet.

After three relatively relaxing days riding, we made it to Comox, and found Jane, Paul and Joel’s house. They attended First Unitarian Congregation of Ottawa with us before they moved out here, and it was nice to see them again. We had a great visit, and decided to stay an extra day when the rain hit early the next morning. We’re now relaxed, refreshed and ready to make our way north to Port Hardy for the ferry to Prince Rupert. 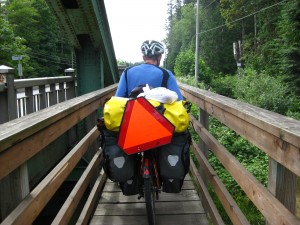 The path is a little narrow – next time we’ll just ignore the signs and stick to the road – even though Becky found Scott’s bouncing off the rails quite amusing. 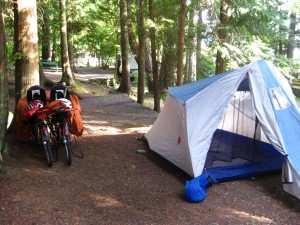 A typical campsite in BC (this was the 4 Seasons Resort near Ladysmith). 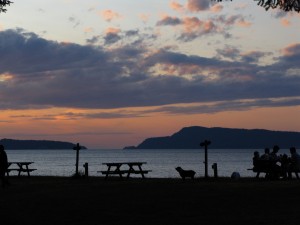 Sunset over the Straights of Georgia – at the Qualicum Indian Reserve Campground. 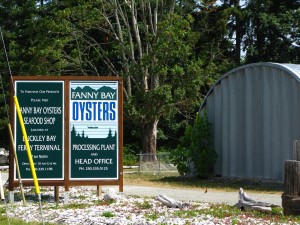 Yummy Fanny Bay oysters – too bad we could find anyplace to buy some! They made Scott remember eating dinner alone in Auckland, New Zealand. Fanny Bay Oysters and Diana Krall on the stereo sure made him homesick. 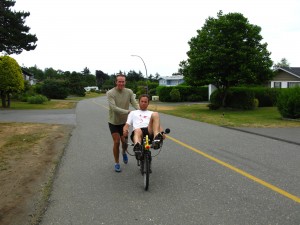 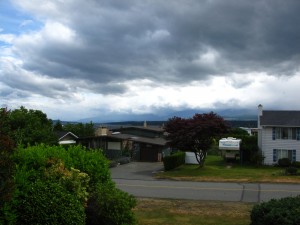 Scary clounds today – glad we took a rest day. Gorgeous view of the bay and the mountains from Jane and Paul’s house though!

3 thoughts on “Riding up island and visiting friends”