The ride up Vancouver Island was nice and relaxing, and it was good to fall back into a routine again. Using our tent and camping gear gave us more freedom than in SE Asia. We could camp when we were ready rather than looking for the next town and a hotel. Camping was still expensive in the RV parks, but not as bad as earlier, and there were many more opportunities for stealth camping. The tent is starting to feel like home again, and camp setup and teardown is pretty quick when we want it to be.

Overall, the riding was quite pleasant, although we had several chances to use our rain gear. The jackets we replaced in Victoria are working out very well. In most cases, shoulders on the road were wide enough to give us space to ride, and almost all drivers passed us with lots of room to spare. On a few occasions we jumped from the paved shoulder to the gravel, but that was mostly for politeness sake, if a transport or logging truck was passing us and there was oncoming traffic.

We found some nice back roads for most of the ride into Campbell River which made for a nice relaxing ride. We even passed a farm and stopped by to pick up some farm fresh eggs and extra yummy cherries. As we arrived on the outskirts of Campbell River we passed a log carving competition. Since we were not in any particular rush, we stopped by to watch the carving in action and take some photos. After 20 minutes, the rain decided to pick up, and our stomachs were grumbling, so we went in search of a place to eat.

As we pulled into the downtown area (or at least what we think might have been downtown), we saw the Tyee Mall. Scott had seen a sign indicating an “all day breakfast” place at the mall, which after some searching and asking around, we found. We spent the afternoon camped out in Banners restaurant and running errands in the nearby shopping centre (Scott got his hair cut and Becky stocked up on groceries for our journey north). Banners had typical family restaurant fare and free wireless Internet. It was warm and dry and we saw no need to rush out in the pouring rain to set up our tent for the night.

For supper, a friend of Becky’s from her days at University of Victoria made time in her busy schedule to come visit with us. Andrea is a teacher in Campbell River, and between the last day of school, kid’s swimming lessons, a staff party and a baseball game she managed to find time to spend a couple of hours with us reminiscing and catching up. Andrea, thanks so much for the visit.

Fortunately, the weather cleared after dinner, and we were able to set up camp without getting soaked. The ride to the campground was a short 3 km from the restaurant. The campground was quiet but nothing special – there were no trees and the lights of the nearby industry made us glad to have our eyeshades.

Friday dawned a beautiful day, filled with sunshine. It did not take long for us to leave the busyness of the southern island behind and enter the wilds of the northern island. There is not much north of Campbell River except beautiful vistas, trees, trees, and more trees – broken up by the occasional fields of clear-cut. The ride north is quite beautiful and for the most part the cars and trucks were well behaved. The shoulder comes and goes. It seemed to be present at the most critical times: that is, whenever we were slowly climbing a hill.

We knew that Sayward was the first community along the northern route, but it is 10 km off the road, so we made no plans to visit. We were pleasantly surprised at the services at Sayward Junction. The restaurant had a variety of home-baked pies which were delicious warmed with ice cream. We arrived at 5 pm, with lots of daylight left and uncertain weather forecast for the next day, so we decided to push on. The folks at the Petro Canada at Sayward junction provided us with some local knowledge regarding campsites and the upcoming hill. They also let us check out the Backroad Mapbook for the Island, which was very nice. Their comments about the hill were not far off, but unfortunately, they failed to mention that the campsites on the map are not signed, and we missed the turnoff for the one we wanted (Rooney Lake).

Since we had passed the lake, we continued on to the Eve River rest area. The rest areas that are away from the towns allow free camping. They have picnic tables and pit toilets, and some are near a source of water, although you need to boil or treat it. The Eve River provided us with a place to wipe off the day’s sweat with some very cold water and lots of water for dinner and breakfast. We camped on a flat spot in the woods behind the parking lot. It was pretty, quiet and peaceful.

On Saturday morning, we awoke to the drumming of rain on the fly of the tent. At first, we just turned over and hoped the rain would stop. It waxed and waned several times, but after an hour, we realized we were in for a wet day. We packed up and made breakfast in a constant drizzle of rain. When we were finally ready to hop on the bikes, the skies let loose and it began to rain in earnest. We slogged our way up for the first 10 km, then enjoyed the ups and downs into the town of Woss. We turned off and stopped at the Pub to dry off and get a warm meal. Note to cyclists – there is a café and a pub; we found the pub food to be rather greasy and guess that the “big sandwiches” we heard of in Woss are at the café not the pub (oops). The pub was dry and had Internet – so we spent a couple of hours hanging out before we hopped back on the bikes for the long stretch into Port McNeil.

Fortunately, after lunch the rain was much lighter and the sun even made an occasional appearance. It made the 70 kms from Woss to Port McNeil a much more comfortable ride. We pulled into Port McNeil and asked about the campsite in town. A local fuelling up at the gas station told us of a back road/trail into the campground that would allow us to avoid the steep uphill into the campsite. With that hint, we found our way to the Broughton Street Campground in Port McNeil. The campground was in a field amidst a nice wooded area and had full amenities (laundry, hot showers, free firewood) – for RVs it even had cable TV hookups!

On Sunday, we again awoke to rain on Sunday morning; however, it was intermittent. Fortunately, we did not have far to ride to Port Hardy, so we lazed about waiting for the “nice day” we had been promised. After a slow morning, and checking our email at the Subway in town, we eventually made our way to Port Hardy. The ride was pretty easy and there were nice paved shoulders the whole way. Becky wasn’t feeling great, so we rode more slowly than usual, but still arrived before 5 pm.

The closest campground to the ferry terminal is the Wildwood campground on the Bear Cove Highway. The website says it is 2 km from the ferry terminal, but it is almost precisely 3 km. We went to the ferry terminal to make a reservation for the Monday morning ferry. We learned that we were not permitted to sleep in the waiting room; however, the waiting room was open all night. Anyone in an RV wishing to spend the night at the terminal was charged a $20 camping fee – which we could do if we wished to camp within the terminal. The terminal no longer permits free camping, at the request of the local RV parks. We had seen a few better free-camping spots earlier, and Scott went on a reconnaissance ride to find the best one. If you are planning to take the ferry and want to know a great place to camp for the night within 1 km from the terminal, just send us a note. 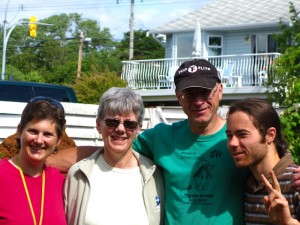 Saying goodbye to the Fox family, our wonderful hosts in Comox. 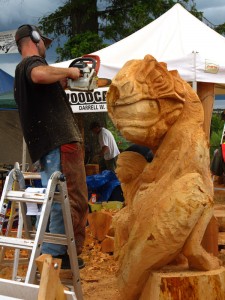 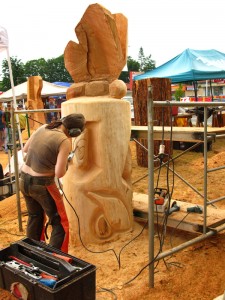 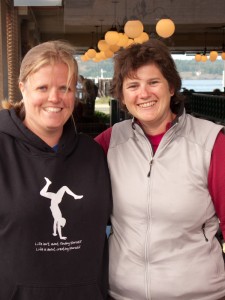 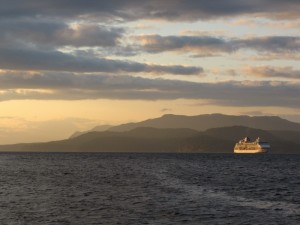 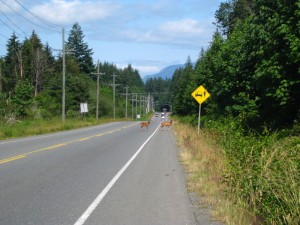 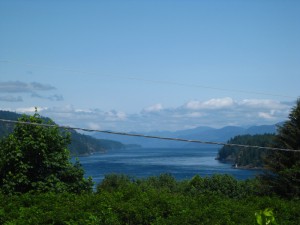 Seymore Narrows – very strong tidal currents, and former location of Ripple Rock, before it was destroyed in 1958 by the world’s largest non-nuclear explosion. 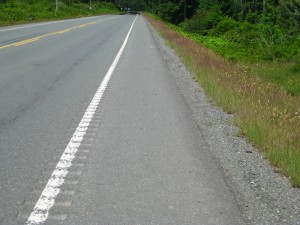 We were impressed that B.C. even moved the “rumble strips” to overlap with the white line and give us more space on the shoulder. Much nicer than the Trans Canada in Newfoundland. The rumble strips also had gaps, so you could jump out onto the road without going over them – if you timed it right! Unlike Newfoundland, in the places where the shoulder was narrow or eroded, there were no rumble strips, so we did not need to jump onto the road. 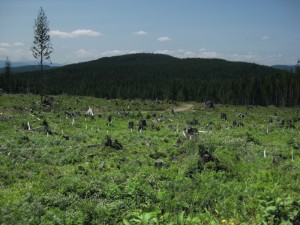 We thought selective logging meant taking only one tree, not leaving only one! 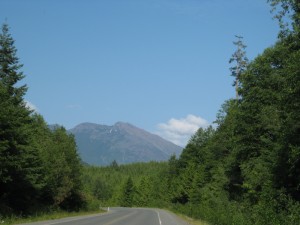 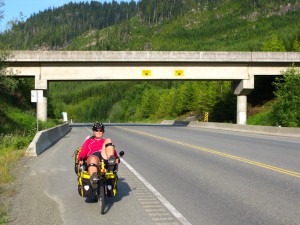 Becky crossing under a logging road. You know they’re serious about logging when the logging trucks get their own overpasses. 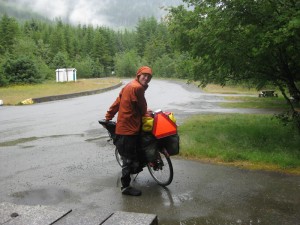 Scott stretching in lieu of yoga in the rain.