The section of trans Canada highway from Thunder Bay to Nipigon (highways 11 and 17) is known as the Terry Fox Courage Highway. Although it does take some courage to ride a bike on the highway, it was not nearly as bad as we feared. When we asked people about this highway, we received may comments about lack of shoulders; however, people also said there were lots of trucks and lots of bicycles – we aren’t too worried about trucks as they usually pass us with lots of room, and the lots of bicycles was certainly a positive sign. Those that advised us the strongest to avoid this section of road, had not ridden it.

On the Thunder Bay – Nipigon section, there are a few segments where the road is in terrible condition and the shoulders are pretty much nonexistent, but we suspect those will be fixed by next year. There are many segments with new pavement and adequate (4 feet) or wide (greater than 6 feet) shoulders. At Nipigon, highway 11 and 17 split, with highway 17 following Lake Superior and highway 11 heading directly East (and a little North). Once we passed this point, the traffic on highway 17 was greatly reduced, giving us nice windows of time without any vehicles in view.

We stopped to see the Terry Fox monument just East of Thunder Bay. Becky was a little disappointed as she was led to believe there was an 8 meter tall Terry Fox – the moment is bigger than real life, but not that big! Having seen the monument and taken the requisite pictures, we were back on highway 11/17. At this point, it was truly awful, with no shoulders and really rough roads. Fortunately, we were able to detour quickly to a coastal road (Lakeshore Drive) which was beautiful, mostly flat, had nice shoulders, and no traffic. 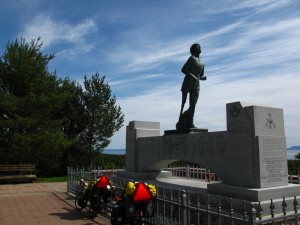 When we got back on highway 11/17, we met a couple who were walking down Yonge Street; that is, they were walking the entire length of Yonge Street from Lake Ontario in Toronto to Rainy River (all 1900 kilometers of it). Given where they were (just outside of Thunder Bay heading West, they must have been at it for the whole summer. When asked why, there answer was pretty much similar to ours “why not?”. We never did catch their names, but wish them well on the rest of their journey.

We stopped for the first night at Wolf River Park ($20), a beautiful campground in a bight of Wolf River, such that they had River on three sides of the park. We had a nice walk in site right on the river, which felt like we were all alone – except for the sounds of trucks driving by on the highway and the occasional train – seems you can never escape the freight trains in Canada! A chipmunk also reminded us to keep our food bags closed when we’re away from camp, even for a few minutes 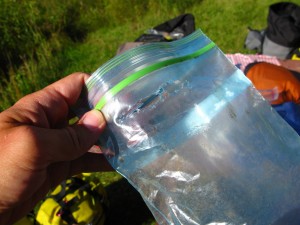 Mr. Chipmunk, demonstrating that we should keep our bags closed

For the second night we stopped at the Gravel River Motel ($15). They mentioned camping on the sign out front so we asked. It seems like the campsites behind the hotel are almost never used. They have a shower hut with a nice hot water shower, and a pit toilet, although the restaurant is not too far to walk. The campsites are overgrown with an amazing variety of mushrooms. We have included some pictures below – anyone know which ones are edible? (We didn’t so we had to pass on the fresh mushroom stir fry – maybe next time). 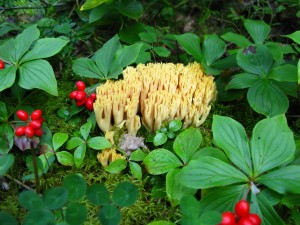 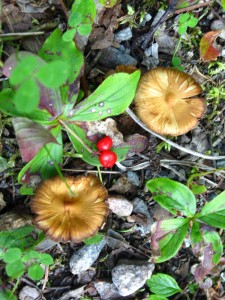 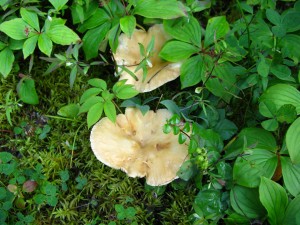 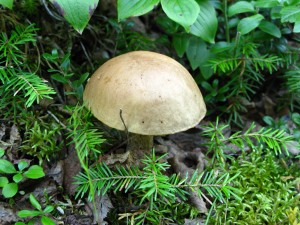 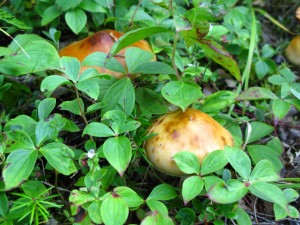 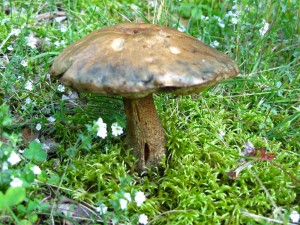 2 thoughts on “On the road again … with Terry Fox”