We have dubbed the section of highway from Prince George to McBride “bear highway” as each day we saw at least one bear as we rode. Fortunately, none of them jumped out on the road too close to us – although, at one point a small black bear jumped out and ran cross the road just after a semi had passed us. We saw the semi slow down suddenly and switch lanes to avoid it. Fortunately, there was no oncoming traffic, so both bear and semi remained unharmed.

For our first night out of Prince George we camped at Purden Lake Provincial Park ($15 plus tax). Since the ride day was short – we arrived at 4 pm – we enjoyed a brief dip in the not-too-warm lake and hung out in the day use area. If the campsite were to fill up, we could set our tent up in the day use area; however, we noticed that many people had left food remnants on the ground around their picnic tables. We decided this was not an optimal place to camp in bear country, so after supper, we packed up and headed out to a campsite. We tried our food hanging techniques, but multiple attempts left us with food hanging within 8 feet (2.2 metres) of the ground. Not exactly regulation, but fortunately no nocturnal critters came to bother us.

In the morning, we left the provincial park and headed up to the Purden Lake RV resort so that we could contact Becky’s parents, who were considering re-joining us. We enjoyed a second breakfast of toast (from delicious whole-wheat home-made bread!) while syncing email and making a couple of Internet phone calls. GSM mobile phones (Fido/Rogers) have no coverage here so we couldn’t use ours, but apparently CDMA (Telus/Bell) still do. We learned that the RV resort also charged $15 for tenting, and their home-cooked food looked yummy. It is a couple of kilometres further up the road, but also closer to the road – the provincial park was about three kilometres off the highway. Depending on what you are looking for, the Purden Lake RV resort might be a better choice. Just look for the fire truck.

Shortly before our planned lunch stop at the Slim Creek rest area, Becky’s parents caught up to us. We quickly took that opportunity to unload some of our weight – with the plan of being on our own for 3+ days without services, we were carrying a lot of heavy food.

The Slim Creek rest area is a nice spot, but a little too close to the highway for camping. Also, technically camping is not permitted, but cycle tourists have been welcomed there in the past. Since it was early in the day, we decided to head for the Goat River rest area for the night. Since it too does not permit camping, Becky’s parents decided to head for an RV resort further up the road, and we would catch up to them the next day. We reloaded with a minimal amount of food (just enough for dinner and breakfast) and were on our own again.

As the kilometres were adding up and just our legs were getting tired, we saw a camping sign – the Lasalle Lake Recreation Area. There was a long, curving gravel road down to the site, so we were debating whether or not to go down – when Anne, John, and Isaac appeared. We were expecting them to pass us at some point on their way to vacation in Calgary, but their timing was impeccable! We gladly accepted their offering of drinking water and John gave Becky a ride down to check out the campsite. The road down was steep, but it was not too long and the camping area was lovely. Since John has been to the Goat River rest area, we gladly accepted his advice that this was a much better camp site. Apparently, there are only two accessible lakes between Prince George and McBride – Purden Lake and Lasalle Lake so it was only fitting that we stayed at both.

For the first time on our trip, we used the free firewood to have a campfire. Unfortunately, our fire starter was among the stuff we left with Becky’s parents – so Becky recalled some of her childhood fire starting tricks, and with the nice dry cedar and some “old man’s beard” fungus that grows on pine trees, she was able to get a nice fire going. We then hopped in the lake for a quick dip – to our surprise the lake was actually quite warm which made for a pleasant swim. After a long day riding, fire starting, and swimming, it was 9:30 pm before we sat down to dinner (oops).

Howard, Val and Julian (grandparents and grandson) from McBride were camping in the area near us. We talked to them briefly and learned that a bear had been seen in the area the night before – so we had to find a secure way to store our food overnight. After our experience trying to hang food in Purden Lake, we looked for another option. Fortunately, Scott discovered that the back of the bear-proof garbage bins can be opened. From behind, you can access an area underneath the garbage bags – and since this was not a very busy campsite the bin was very clean. We tucked our food bags and toiletries into there for the night, and slept soundly.

The next day dawned clear and beautiful, with a spectacular view across the lake, which put us in good spirits for our planned ride to the western boundary of Mount Robson Provincial Park. The first 7 km downhill to Goat River was great, and the big climb up Goat River hill didn’t dampen our spirits, but shortly afterwards strong headwinds began to sap our enthusiasm.

Ten kilometres outside of McBride, Becky’s parents caught up to us to let us know they had setup camp at the RV Park just east of McBride. They had gone to check our planned campsite near Tete Jaune Cache the previous night, and were not impressed – no laundry, no showers, no Internet. We were happy for the change in plans, as we were both tired after a long day followed by a day of headwinds. Now we could look forward to a stop shortly after lunch.

With the strong headwind, we were riding in close formation – Becky drafting off of Scott when we saw a logging truck. He stopped at a cross road and waited to enter the highway. Scott nodded to the driver, and got a nod back. Then Becky waved to the driver. When Scott saw the driver wave back to Becky, Scott interpreted it as a request to stop. Of course, Becky just saw it as a return of her wave. Scott stopped suddenly and CRASH – Becky smacked into the back of Scott! Oops. After over a year riding together, this was the first time we crashed into each other. Fortunately, no damage was done to either us or our bikes.

We spent the night at the Beaverview RV Park in McBride (www.beaverviewpark.com) ($19 plus tax). We were told that cyclists often stop here, as it makes for two nicely spaced days into Jasper. Also, they are the only place in the area with hot showers (free) and laundry – both of which we needed after two days of camping without services. The free Wi-Fi internet was a nice bonus too. The staff were very friendly and we enjoyed an afternoon of showering, doing laundry, lazing about, and napping. As an added bonus, Becky’s Mom and Dad cooked up the best steak dinner we have had in many months. 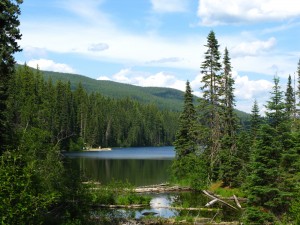 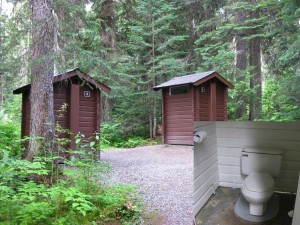 An outhouse surprise – a flush toilet! 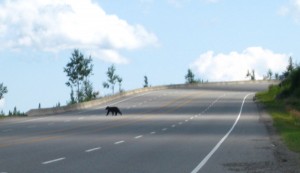 One several bears we saw on the highway 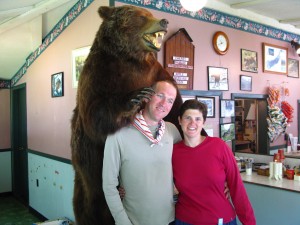 Up close and personal with a bear (fortunately stuffed) 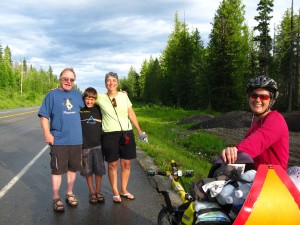 John, Issac and Anne – our saviours! 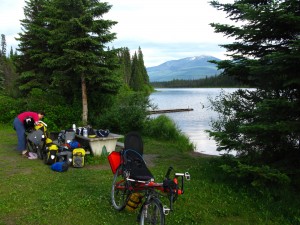 Setting up camp at Lasalle Lake 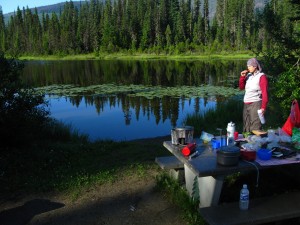