On the route from Terrace to Kitwanga (the intersection of the Cassier Highway to the Yukon and the Yellowhead), we crossed paths with our first group of loaded cycling tourists on this leg of our journey. We pulled over and had a brief chat with the group – three girls who had ridden from Inuvik and were destined for Newfoundland via the Queen Charlottes and Vancouver Island. They had been mostly wild camping, and were much younger and clearly more adventurous than us! They have quite a journey planned for this summer. 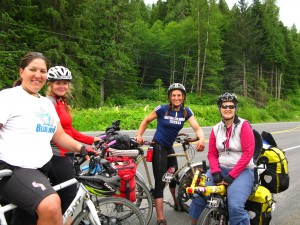 For the first portion of the ride, we continued to follow the Skeena river. It is a rather large river, with an amazingly strong current. After seeing so many “rivers” with little or no water in the various countries on our journey, it was nice to see rivers and creeks with a bounty of running water.

We stopped at the Petro Can at the intersection of Highway 37 and 16 in Kitwanga for a post-ride pie and ice cream break. The pie was yummy but the service was a little cold. We camped at the Cassier RV Park, in Kitwanga. It is a great campsite, with a nice gazebo for cooking, laundry, and free hot showers. It is only $12 per night for cyclists, which is a nice break; however, it is 5 km off the main highway – a little further than we like to venture at the end of a long day. We were very glad for the gazebo when we awoke to rain in the morning, as it meant we could make breakfast and get organized without being out in the rain.

Awaking to rain, we were slow to get organized and moving. We were hoping that if we waited long enough the rain would stop, but alas, we were in for an all day rain. It was noon before we finally started riding.

We stopped in New Hazelton at Rob’s Restaurant for a late lunch, to dry off, and refuel. The rain had stopped, so we decided to push onto Moricetown for the night. The ‘Ksan campground looked good too, but it was a 10+ km detour in old Hazelton. It was already after 5 pm when we left, so we knew we were in for a late night. We continue to be happy for the long hours of daylight. We left the Skeena behind in New Hazelton, and without the river to follow the hills became more frequent and steeper. There was one rather large climb out of New Hazelton to ensure we were nice and warm after our lunch break.

We stopped for the night at the Moricetown Campground, just above the fish ladders. The campsite felt more rustic than Cassier RV Park, and did not have a cooking shelter, but it did have laundry and free hot showers. It too was only $12 per night for tenting. We arrived late, and by the time we were done with dinner, showers, and laundry, darkness was upon us. We were warned that a bear was sighted a few days ago, so for lack of a better place, we stashed our food and toiletries on a high ledge in the washrooms. (We have ropes to bear bag our food, but it’s nice to be able to avoid the hassle.) 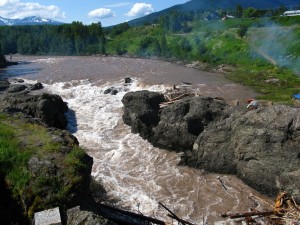 We awoke to a nice sunny day and even the late afternoon showers mostly avoided us. We stopped in Smithers for lunch and to get groceries. We had planned on lunch at Smitties for old time sake (Becky used to eat there before on ski trips when she was young); however, it had long since closed and even the building was torn down. Since it was a beautiful day and the visitor center had free wi-fi and a picnic table, we decided to grab the makings for sandwiches at the grocery store and enjoy a self catered lunch.

Our break in Smithers took a little longer than we hoped, and we were again back on the road with the expectation of arriving at our destination late. We had hoped to make it into Houston before 8 pm; however, we had not anticipated Hungry Hill. Hungry Hill turned out to be a steady climb of almost 300 meters, and when we reached the top, we were told the grade was 8%. It didn’t help that the road was straight, so we could see what we were getting into. This was the biggest single climb we have done since re-arriving in North America, which doesn’t seem like much, but certainly would have a year ago. We were both rather impressed at how much stronger we ride. Although the hill slowed us down, we had no trouble riding the whole way.

In Houston we decided to stay at the Shady Rest RV Park. It is more expensive than the last few places we have stayed, but the showers are really nice. We decided that we would take a rest day to give us a chance to get caught up and sleep and blog posts, as well as resetting our schedule, so we can start off earlier (i.e. in the morning) and arrive at our destination at a decent time. Also, Becky’s parents joined us here with their RV, which will allow us to carry a little less weight through the worst of the hills and into the Rockies. We are also looking forward to arriving to a home cooked meal at the end of the day, cooked on more than our little MSR stove.

The location of the land slide that in 2007 isolated Kitimat and Terrace for a few days. 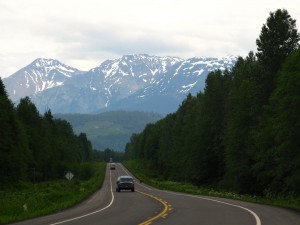 The mountains are quite beautiful when the sky clears to let you see them!