Houston is home to the “World’s Largest Fly Fishing Rod” although, Becky thinks the large fishing rod just outside of Terrace on the Kitimat/Terrace highway is more impressive. It is just in someone’s front yard, and not quite as elaborate as the one in Houston. We don’t have a picture of the Terrace one yet, but when we get one we will update this post with it. 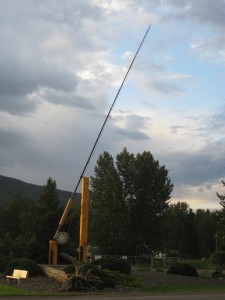 Leaving Houston, there were clear signs of the effects of the Mountain Pine Beetle which feeds on mature lodgepole pine trees and kills them. Most of the towns in the area were given government grants to removal all the dead trees within the town sites. Ironically, some of the hillsides outside of town which have not had the dead trees removed are very pretty. The reds add to the greens creating a beautiful contrast. That being said, the devastation caused by this outbreak will be felt for years to come. 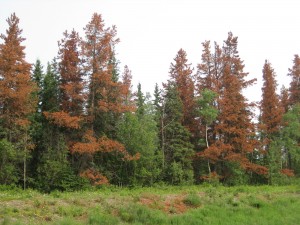 When we reached 6-mile hill we definitely felt the benefits of carrying less weight – most of our bags and heavy stuff were left with Becky’s parents. We had been warned about 6-mile hill, but found that it was not 6-miles long (more like 3 km) and even with the constant 8% grade the climb was not difficult.

As we have been traveling from Prince Rupert to Burns Lake, we have seen many First Nations tourist attraction signs, but have not stopped at any of the sites. We also have passed by several fish hatcheries. Although some of the sites do look interesting, we are feeling an urgency to make our way east, so have made riding our priority.

Arriving in Burns Lake, it did not take long for us to develop a negative impression of this town. At one point a kid even jumped out onto the street and feigned pushing Scott over while he was riding, as if knocking over a cyclist while riding would be funny! We were utterly shocked by this behaviour, and definitely not impressed. First time on our trip anything like this has happened.

We spent the night at the Burns Lake Campground, about 6 km east of Burns Lake. The campground used to be a KOA camp. The park had good facilities for RVs staying overnight, but the sites were nothing special. The only bonus was that we were permitted to share a site with Becky’s parents, so it was cheaper than most places that require us to have a separate site.

East of Smithers the shoulders have become less frequent and when they do exist, they are in poor condition. It seems that the street sweepers do not consider the shoulders as part of the road, so often the rocks and junk from the road are swept into the shoulder. At one point, Becky heard a swish-swish with each tire rotation. She stopped to examine her tire to discover a piece of metal stuck in her tire (a staple or a piece of steel belting from a tire). She was sure that when she pulled it out the tire would go flat, but no! Amazingly the tire was not punctured. We are extra grateful for the Kevlar lining in the Marathon Plus tires. Good puncture resistant tires are highly recommended for this road!

When we arrived in Vanderhoof at Dave’s RV park, we discovered that Becky’s mom was not feeling well. Unfortunately, she had picked up either food poisoning or a stomach flu. Either way, she was not in any condition to continue with the trip, so the next morning, Becky’s parents headed back to Kitimat. We really felt spoilt for the two days they supported us – having breakfast and supper made for us.

The ride from Vanderhoof to Prince George felt like it was uphill the whole way, which felt even more difficult after two days of riding without most of our gear. The bikes definitely felt heavy on the up hills, which certainly made the down hills that much more fun!

When we turned onto the street feeding onto Garth’s place, we arrived to find a welcoming party! Garth and his three boys had come to the bottom of the street only 30 seconds before we arrived, thinking that we should be arriving soon! What a wonderful way to start a visit. 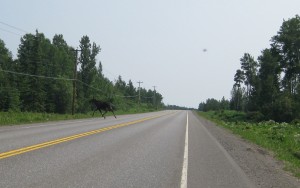 Moose crossing the road in front of us. 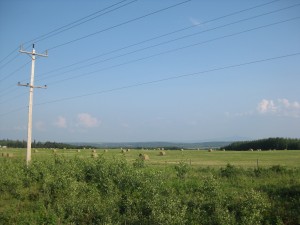 The landscape in central BC, between the Coastal Mountains and the Rocky Mountains reminds us of Ontario. It looks rather flat, but the roads seem to have a lot of up hill!