Mornings at a quiet campground are one of my favorite places. It is just the first week of the “high” season, so really it is a shoulder season here. It isn’t exactly warm, which means my fingers freeze as I write, and my warm coffee tastes just that much better as it warms my whole body.

Breakfast at a damp campsite and Vance with the awning up: After breakfast, we packed up camp and went for a hike along the South Grove trail (http://www.redwoodhikes.com/Calaveras/SouthGrove.html). This was was reported at 5 miles and involved a little more hill climbing. In reality, the hills were not too bad. I managed the full loop. Runkeeper tracked it at 5.77 km but I forgot to start it right away, so it was more like 6.5 km – certainly the longest I’ve hiked since the Peak Hike last October. My steps at the end of the day are in excess of 16,000. More importantly, I was able to walk for 2 hours without sitting down. That is a huge improvement. Of course, my feet hurt for several hours afterwards, but I do feel like they are recovering quicker too.

Scott hiked the extra part of the trail out to the end of the South Grove and caught up with me just before I arrived back at the car.

Unlike the North Grove, the South Grove is much more in its natural state – a forest trail with all the natural mixed varieties of trees and underbrush. I found that I felt a lot more like I was on a forest hike. It helped that we only saw one other couple while we were out on the main trail. We saw several others that were just starting their hikes as we were finishing up. 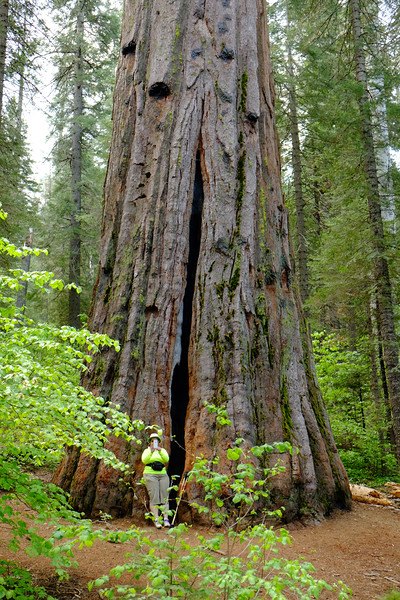 At one point, I got swallowed up by a giant sequoia: 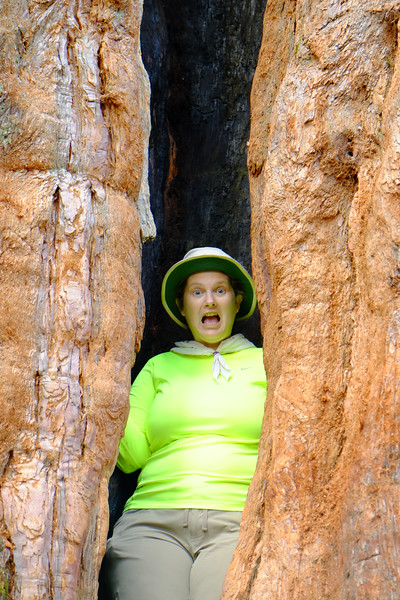 Fortunately, Scott came to my rescue: 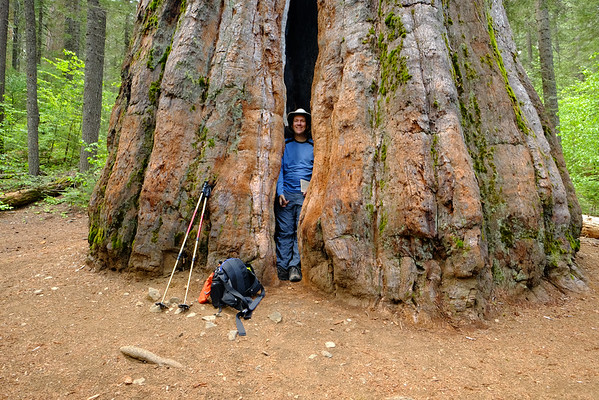 Part of the reason these trees live so long is that they are resistant to fire. Here you can see me looking up at the trunk of a giant sequoia that has had part of the core of the tree burned. Here I have jumped into the picture to provide scale:

The “Chimney Tree”– a large redwood burned inside so severely that a chimney was formed up through its broken top. The thick sequoia bark is relatively fire-resistant, but fire sometimes does manage to burn through. When this happens, fire can carve out a chamber inside the still living tree. (Harrison, 2008, p. 14) 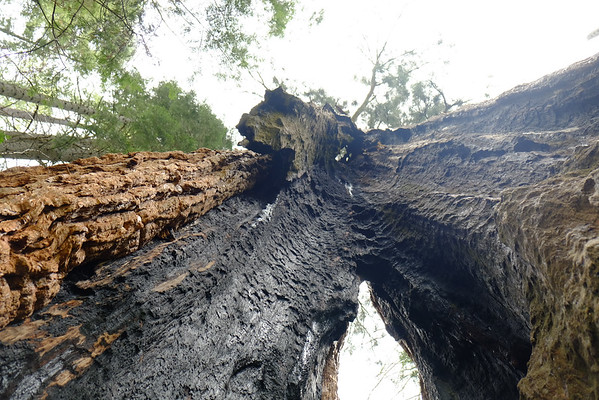 After our hike, and a picnic lunch, we showered then headed over the Ebbetts Pass to the  Grover Hot Springs State Park near Merkleeville. This campground is famous for its hot mineral springs swimming pools. The pools are open until 8pm; however, the campground ranger recommended going first thing in the morning (since tomorrow is the weekend, it opens at 8am) as they empty the pool at night and refill with fresh water in the morning. We may decide to give it a try tomorrow morning – it is somewhat dependent on the weather.

It started raining while we were driving. The rain has picked up – instead of occassional showers, it is a pretty steady rain. We were glad for the awning on Vance, as it gave us a dry space to setup and make our dinner. We’ve now reconfigured Vance to have the seats in the back accessible, so that we can sit on the back bench and read until we are ready for bed.

Dinner was clearly rather delicious … that or the beer was: 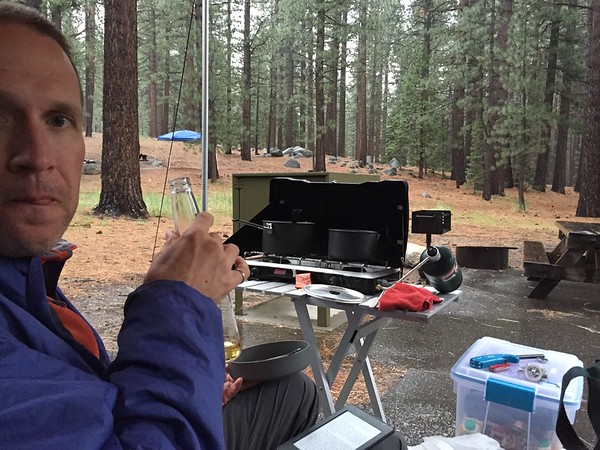 If it is still raining when we get up in the morning, we’ll pack up and head to a restaurant for breakfast – one with Wifi which would allow us to check the forecast. If it is going to rain all week in the Eastern Sierra, we’ll figure someplace else to go. It is somewhat ironic that California is in the middle of a drought and yet we are getting rained out on our vacation!