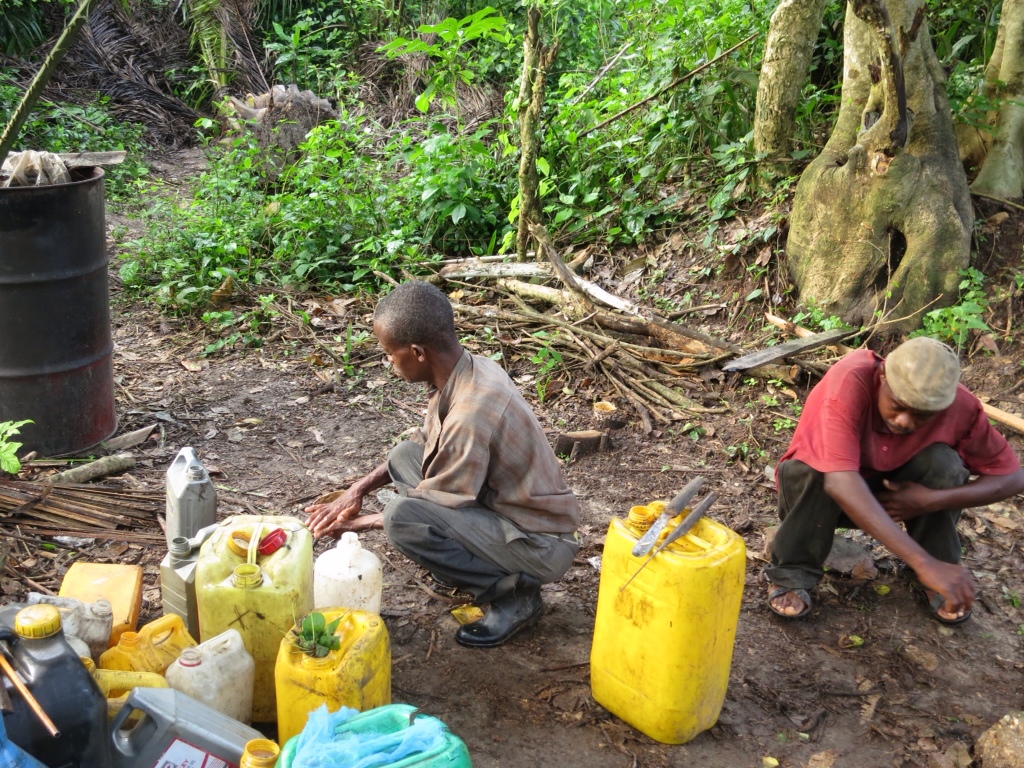 Since palm wine is mostly harvested first thing in the morning, this is how our day began. On our way towards breakfast, we followed our guide through the paths beyond the village to see the palm wine harvest. 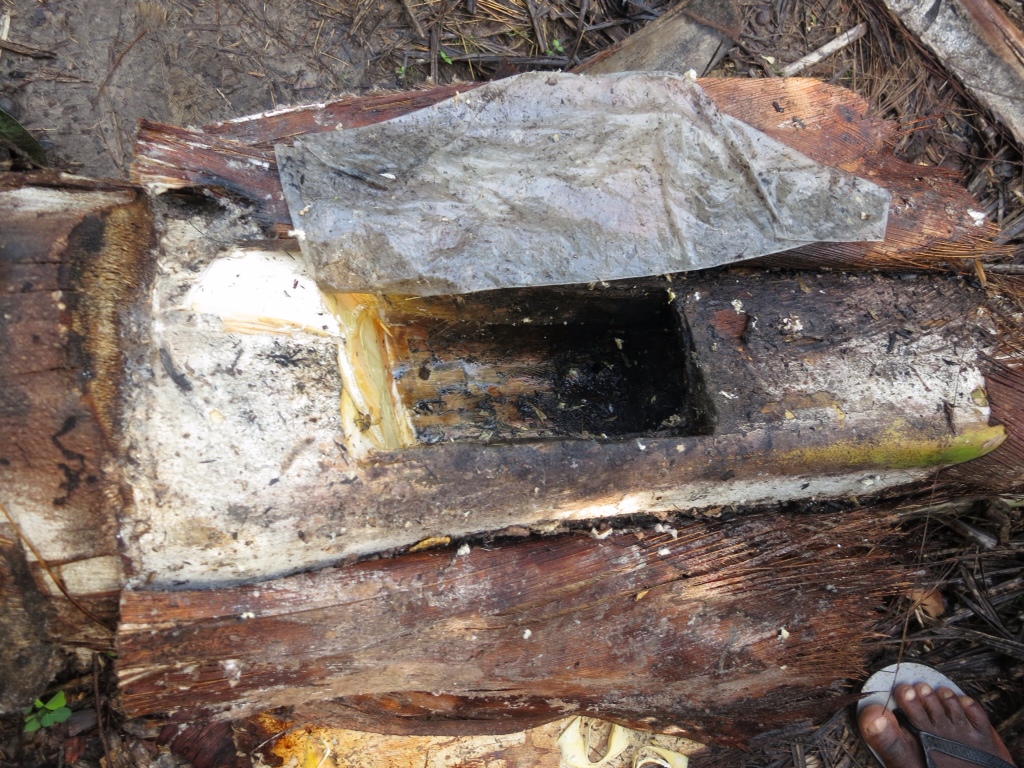 Palm wine is extracted from recently felled palm trees. The farmers cut a hole in the base of the tree and set a jug under it to collect the sap that pours out. When it can be sold within 12-hours, it fetches a good price, but often they can’t get it to market fast enough. The alternative is to let it ferment, and then distill it into palm gin. We were given an opportunity to try some of the wine, which we each took the tiniest of sips (it was a pretty unsanitary operation). Becky definitely did not like the taste, and certainly would not be seeking out further opportunities to try it! 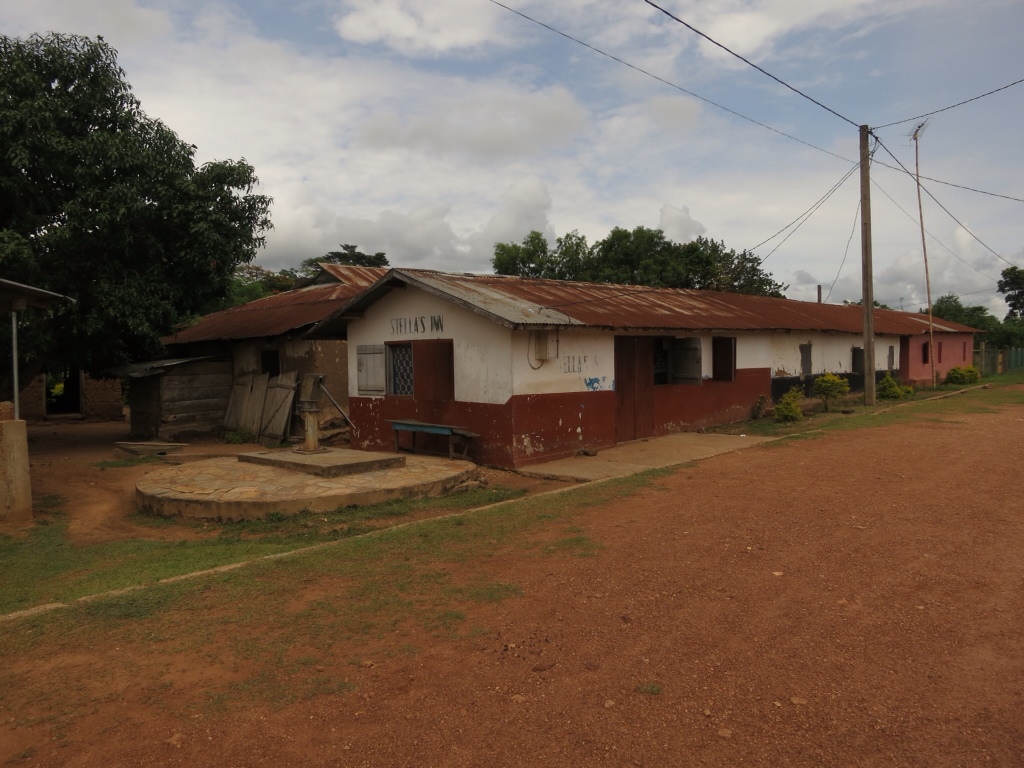 We enjoyed our breakfast on plastic patio furniture at “Stella’s Inn”. It wasn’t exactly as we had visualized it when Cindy at Jolinaiko recommended it.  Plastic tables were set up out front for the tourists, allowing you to watch the world go by. It made for a uniquely Ghanian experience. Breakfast was the usual spread, made especially for tourists (fried eggs, toast, fresh fruit, and hot water with your choice of instant coffee, tea, or milo) but also includes pieces of fresh avocado and pineapple.  The locals were eating a more traditional breakfast of stew with rice, which Scott was more interested in. 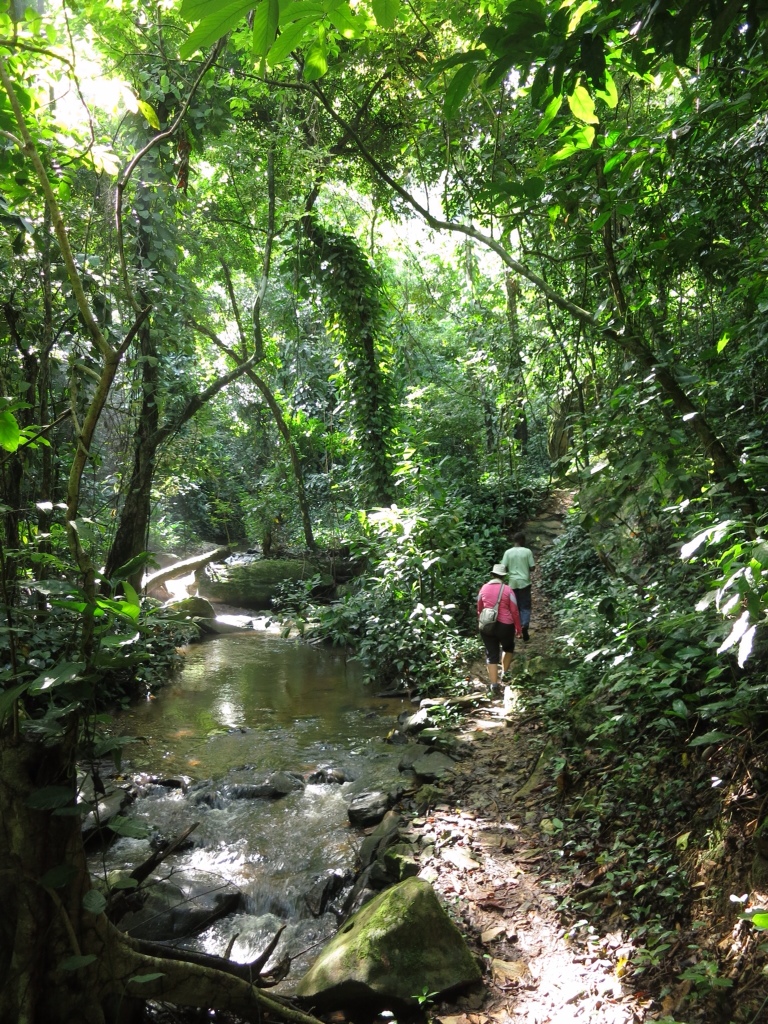 After breakfast we were assigned a new guide to take us on the hike to the waterfall, as our guide from yesterday was taking the students who arrived yesterday on a longer mountain climbing hike before they went to the waterfall. The trail itself was relative flat and the trees provided a pleasant shade in the morning heat. 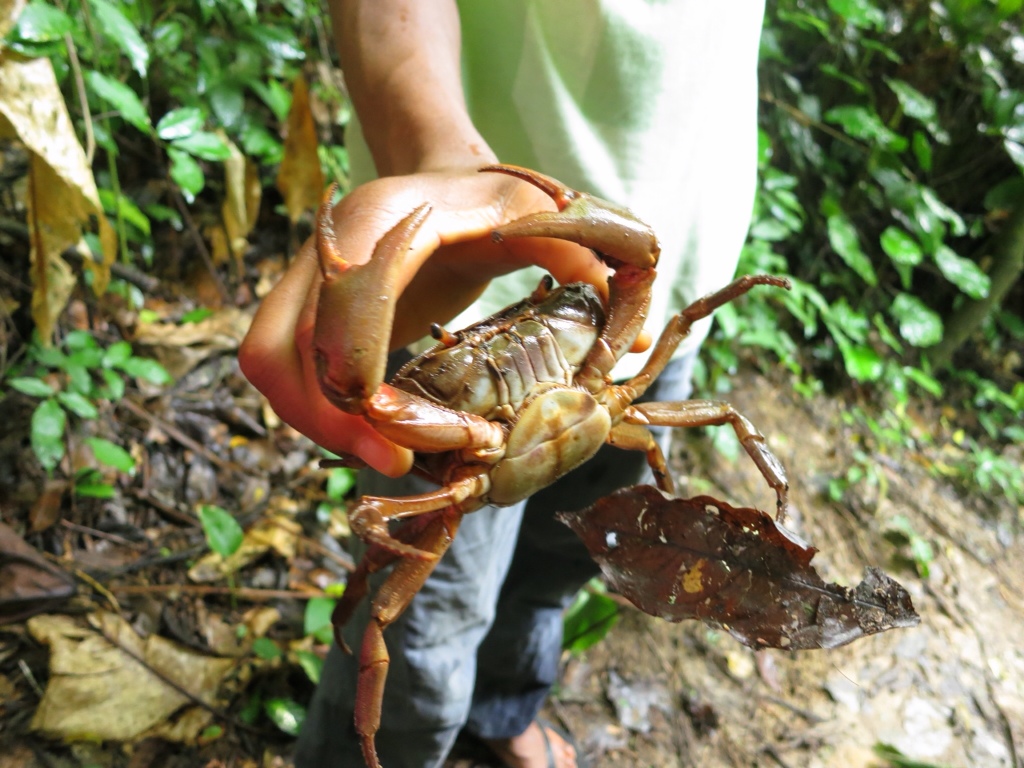 Along the way, this land crab crossed our path. Our guide picked it up so Becky could take a picture. She implored him not to kill it and just return it to the jungle. She would have be just as happy to take a picture of it in its natural setting. This is an aspect of eco tourism that the guides haven’t really grasped yet. 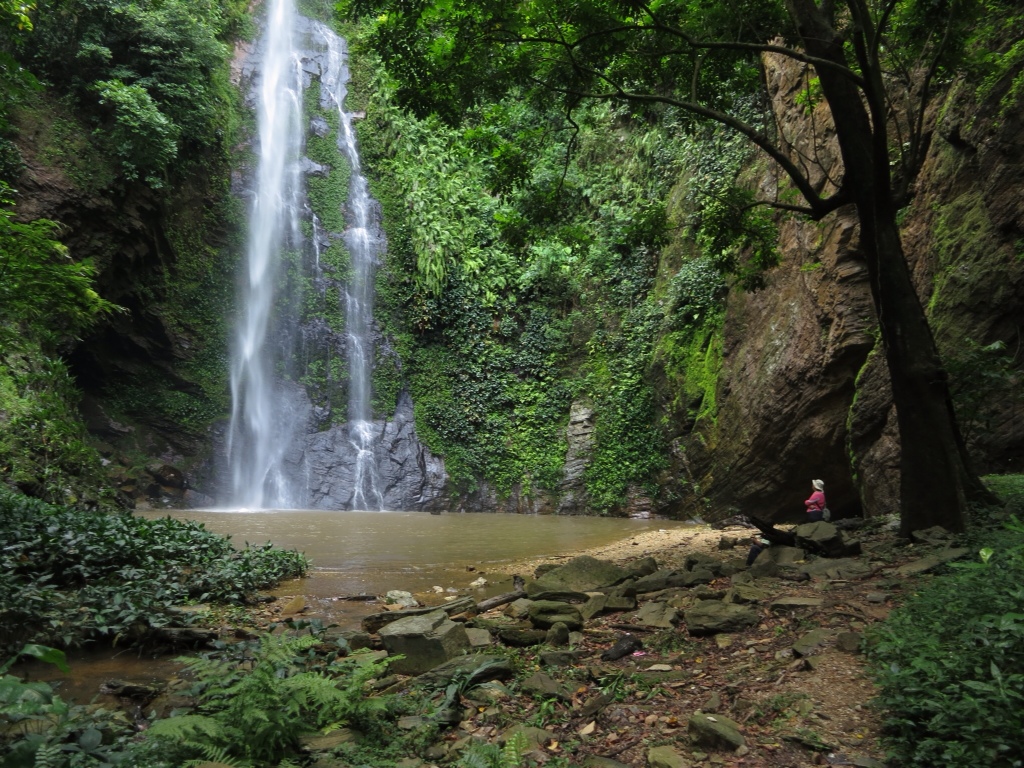 The waterfall was gorgeous. It reminded us of the waterfall that we flew into on our helicopter ride in Kauai several years ago. The water was so inviting! There was a no swimming sign but our guide ensured us that it was there for the locals, as many of them don’t know how to swim. He said it didn’t apply to tourists 😉 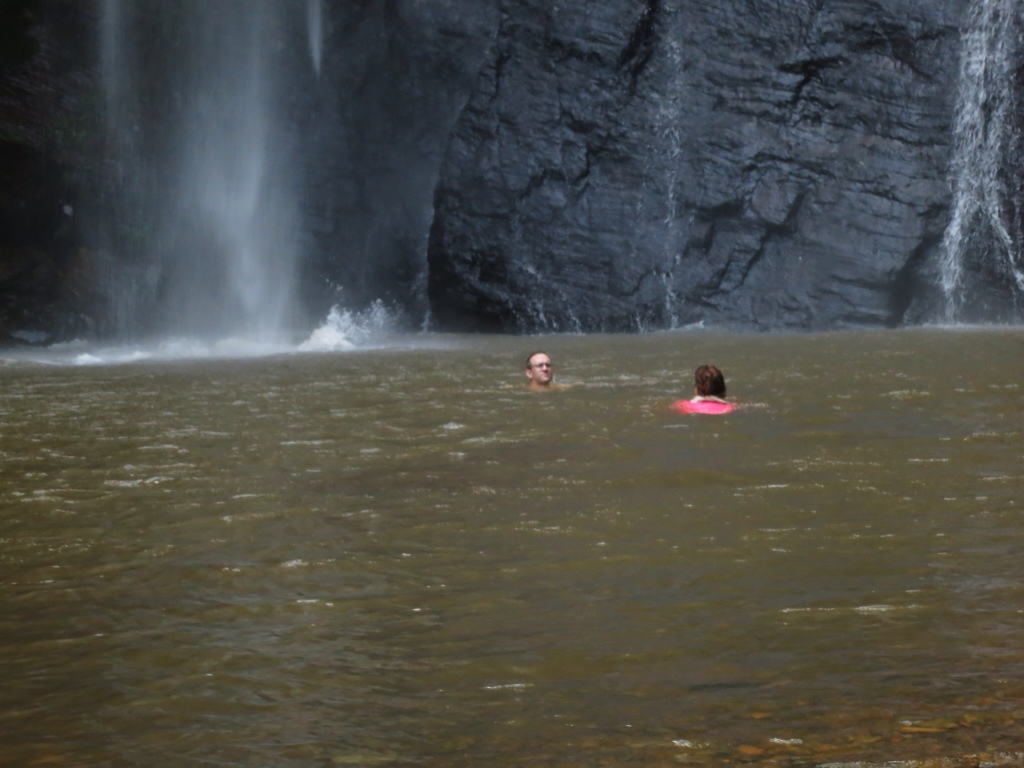 Given how hot and sweaty we were, and how much we had been looking forward to the refreshing swim, we decided to go for it. We had heard from the other tourists staying at the guesthouse that it was very refreshing. One of them mentioned that the water was clean enough to drink, but we didn’t buy that! It was, however, very refreshing after the hike there, and we both very much enjoyed the brief swim.  Scott did look around for the snails which carry Schistosomiasis, and didn’t see any, but we found out later that no fresh water in Ghana is safe from the parasites.  Whups! 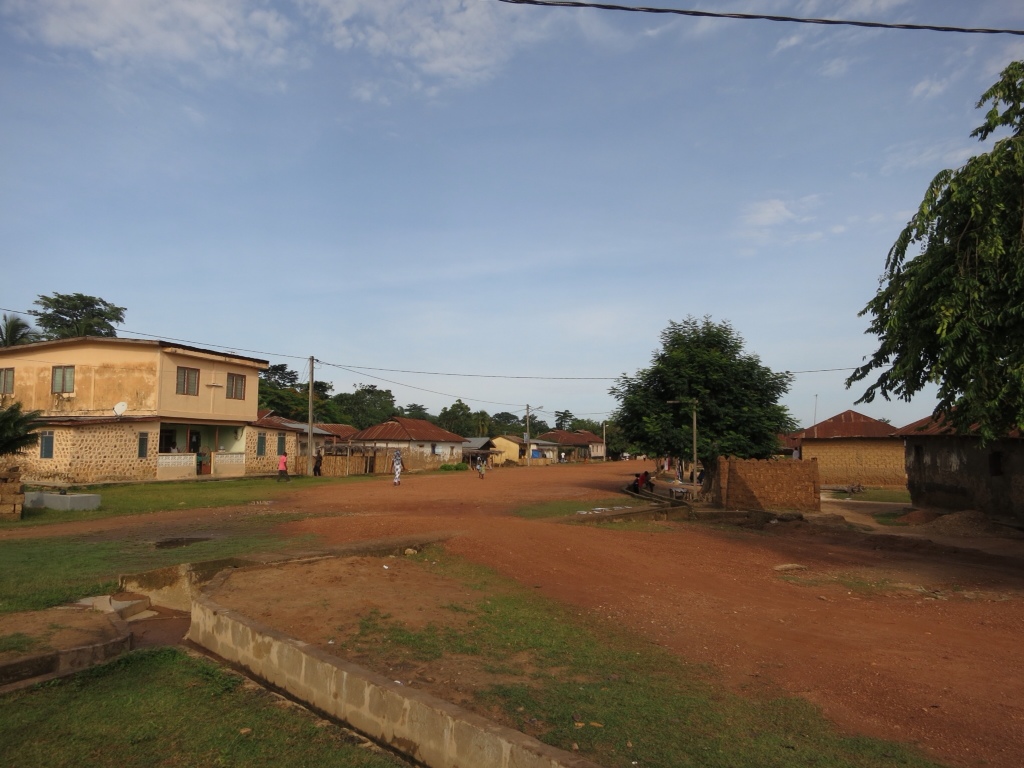 We had hoped to also get a chance to take the “village tour”, but alas, we were out of time. We wanted to see the Akosombo dam, and the last tour of the day was at 3pm. As it was, our hike took a good chunk of the morning, and we needed to get back on the road. At this point, there was no sign of the new driver and vehicle, so it looked like we would be spending another day in Fofo’s un-airconditioned Landrover. 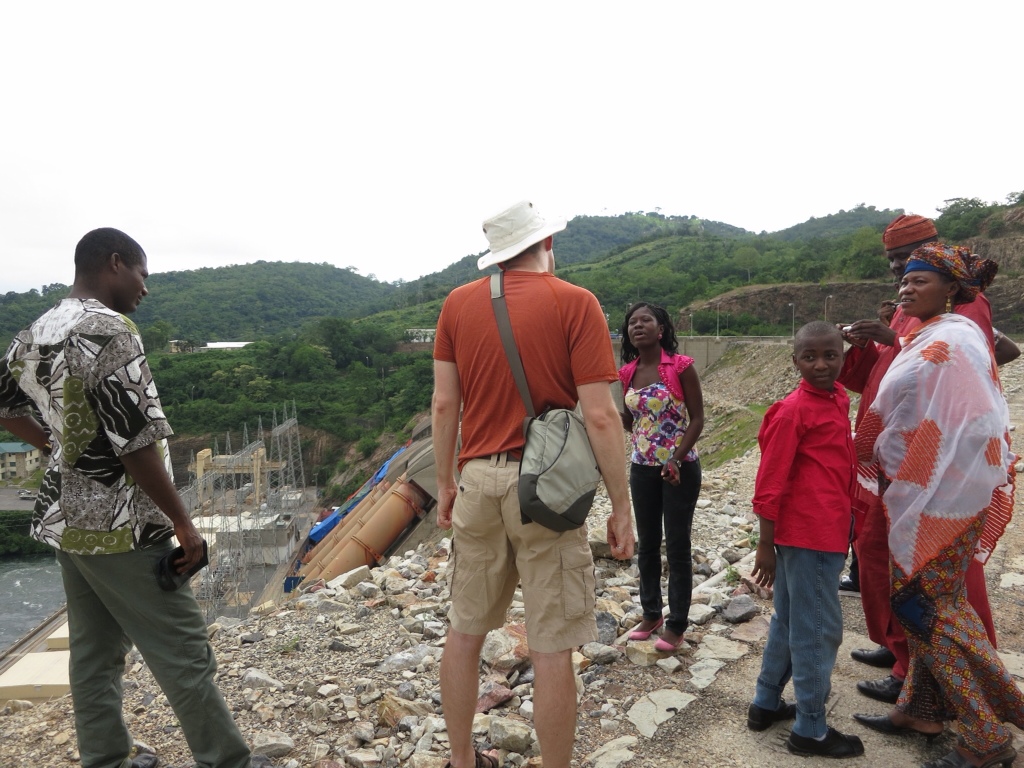 Our guide (the girl Scott is talking to) seemed quite knowledgeable and was able to talk a lot about the dam and where the power was used.  It was completed in 1965, and can produce 1020 MW of electricity, about 10% more than the Kenney Dam in Becky’s home-town of Kemano. Since this is the largest dam in West Africa, and backed by the largest man-made lake in the world, we expected it to be significantly grander.  Power is proportional to the height of the water fall though, and the water falls 800m in Kemano compared to just over 100m at Akosombo, so in Kemano the same power can be produced with only 12% of the water flow.  The height of water thanks to the Coastal Mountains in Canada makes a big difference.
This visit really brought home the difference in electricity consumption between Ghana and Canada.  Akosombo produces about two thirds of Ghana’s electricity, and much of that is used by the VALCO aluminum smelter.  The Kenney Dam produces less than one percent of Canada’s electricity.  Canada produced almost 600 TWh of electricity in 2011, compared to about 6.75 TWh in Ghana.   After spending time in Benin, we began to think of Ghana as pretty modern and well-electrified, but this puts some of the disparity into numbers.
The guide also talked about how 80,000 people were relocated and adequately compensated when the area was flooded.  If true, that’s better than we did with the relocation of the Innu for the Upper Churchill Falls dam.
Unfortunately, Scott was pretty animated when he was discussing something with the guide and when he went to put the camera in his pocket he dropped it onto the rocks. The screen shattered on the corner, but fortunately, it was still usable. This wasn’t a good trip for us from a camera perspective, Becky’s camera died on the third day (it was the same one she bought in Greece during our GoingEast trip, so it had a long life). The camera that Scott dropped was bought only a week before we left for Africa! 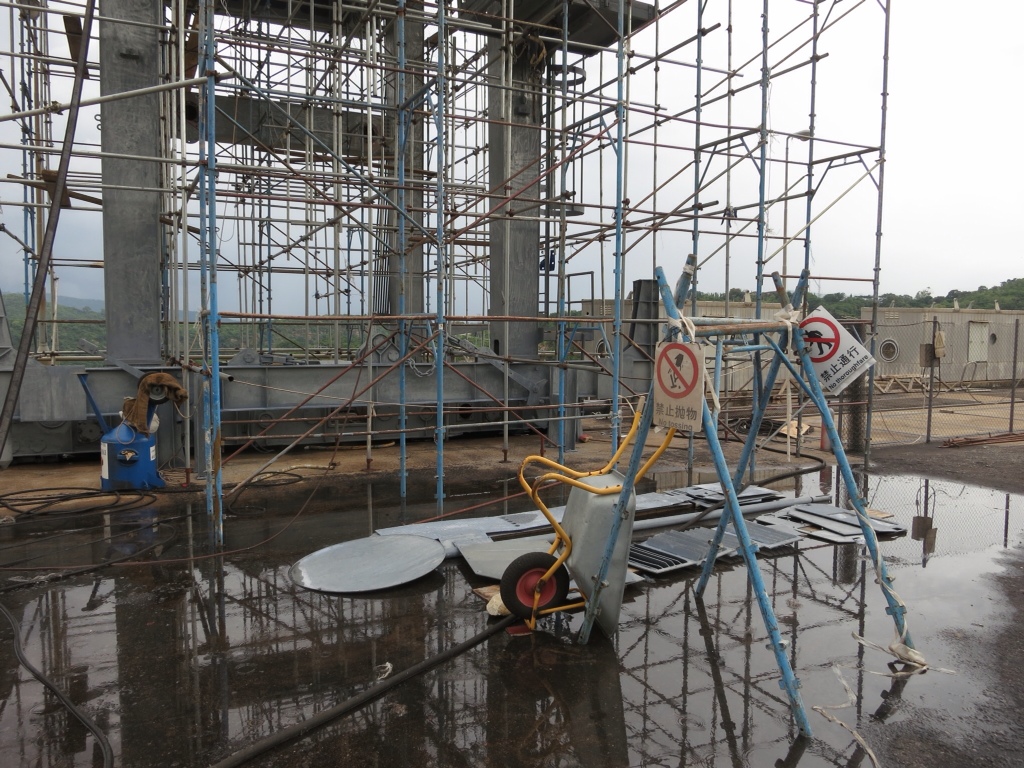 We were amused that many of the signs for the workers were in Chinese. China is providing a fair bit of funding and much of the skilled labour for the refurbishment project. 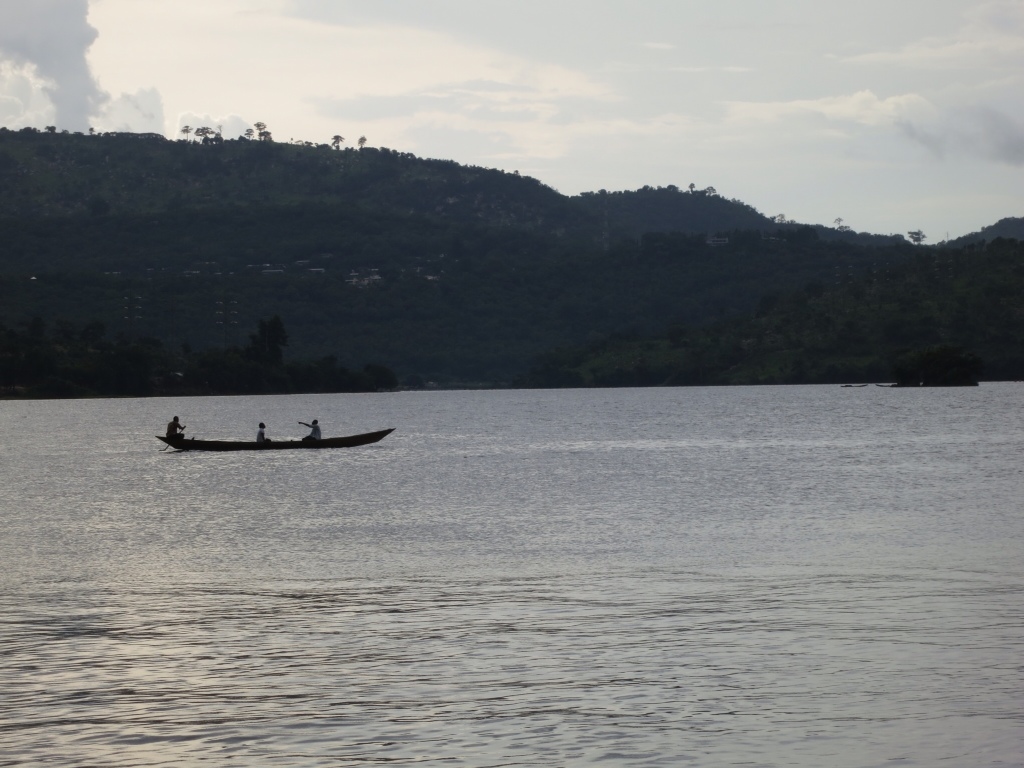 After our tour of the dam, we stays at a resort (with air conditioning) located on the river just below the dam. The restaurant had a beautiful view. 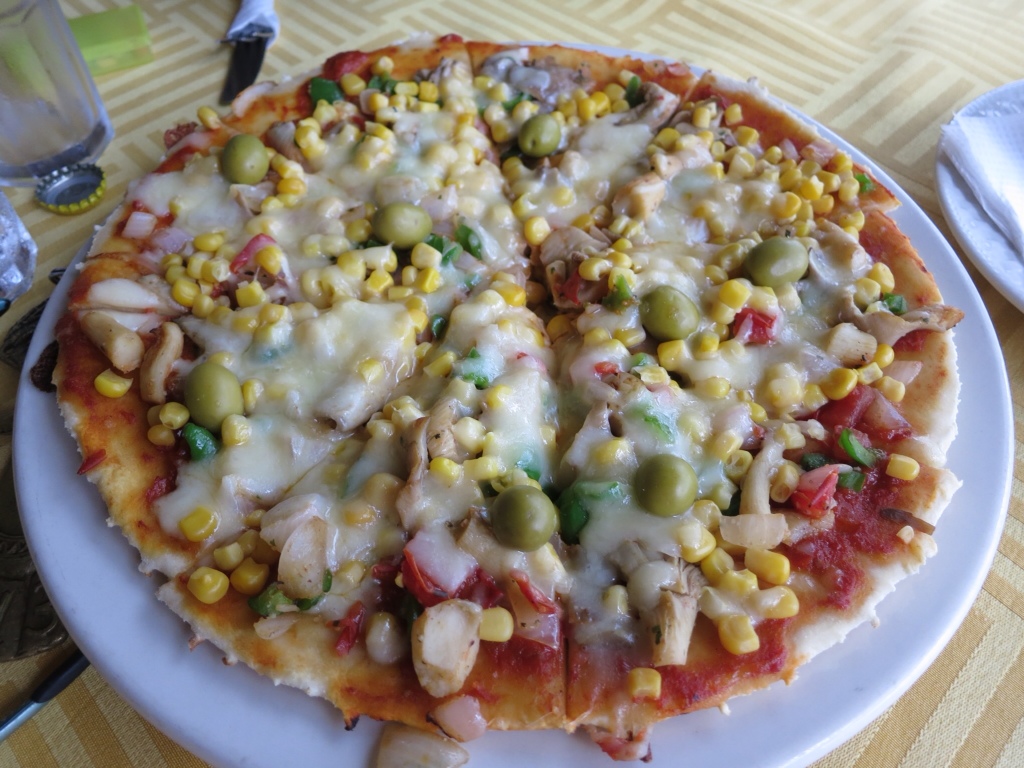 Since we’d skipped lunch, we figured we try out a pizza for a snack. It was perhaps the oddest pizza we’ve ever had! What we did learn was what food they had for dinner. They had a pretty impressive menu, but when the waiter arrived,  he listed the three dishes they actually had. So, rather than making us guess (which is what usually happened), we knew that we only needed to choose from the three specific things.

For dinner, Becky had shrimp, and Scott had fish with banku – a white paste made from fermented corn and cassava dough. Banku is fermented in a similar way to Sourdough, so he was looking forward to trying it.  It definitely smelled well-fermented, and had a gluey consistency reminiscent of severely overcooked porridge.  We both tried a bit, and found it to be acquired taste, putting it mildly.  Scott will eat almost anything, but all but those first two bites stayed on the plate.  He doesn’t plan to acquire a taste for Banku any time soon.  It was so memorable, we forgot to take a picture!