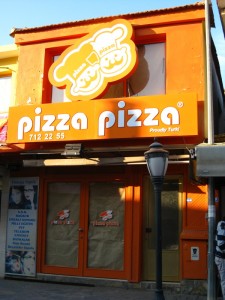 Who knew that Pizza Pizza was a Turkish company?

The last few days have been spent resting up and venturing out to find meals and Internet access. Becky’s cold got worse before it got better, but she is now on the mend. We have spent enough time in Cesme, so tomorrow we will venture out to Izmir, one way or another. The ride is supposed to be flat and pretty, so we will try riding along slowly. If that does not work, the bus is always an option.

So far the food has been good. We need to work on checking prices. We are not certain but we often feel like we are being ripped off. That might be because we are in a tourist town. The prices listed are confusing or are the lowest prices (bait-and-switch), so it is often difficult to tell if we are being ripped off or paying a fair price. We are pretty sure the ice cream folks were ripping us off. Otherwise, it may be more our paranoia than anything. Either way, the prices are still significantly less expensive than in Greece and Italy.

We have discovered that meal times here are much closer to the times at home. We have also discovered that we can get a solid breakfast at the bakery around the corner. They have an assortment of buns with a variety of savory fillings. The bagel shaped buns are particularly good, even if what Becky first thought was chocolate actually turned out to be black olive tapenade. (Scott remembered Friedel and Andrew getting caught by the same mistake in Turkey, so he wasn’t surprised).

We have enjoyed the baklava for dessert, but have found that the prices are rather creative. They list prices in kilograms often with a different price for each. When you ask for more than one type, they are all mixed together and packaged before they are weighed. Also, the price is then rounded up. So, if the baklava plus packaging weighs 385 g you pay for 400 g. At one place, we asked for baklava and some squares that were priced per piece. We were charged for the per piece price plus the weight of the entire package! So, we have learned to keep our baklava orders simple and stick to one type – which is absolutely delicious.

After supper on Thursday, we returned to the Pensiyon for a cup of tea and to eat our baklava. We were invited to sit down at the family table while they all watched the news on television from the couch. We learned that in the summer, Ali (the father of the family) is a carpet salesman while his wife runs the Pensiyon. Ali shared with us information about carpet manufacturing in Turkey. He says that the company he works for can sell their carpets for less because they are made by families in Cappadocia. There, the wife and children make carpets in their spare time to help the family. Some of the other companies have manufacturing plants, where they must pay workers to make the carpets, so those carpets are more expensive. It really had us wondering about which way is more socially responsible. Being able to choose your hours and work at home rather than a factory seems like a big plus, but are they being fairly compensated?

On Saturday, Scott ventured out on his bike to check out the different options for Thermal baths in Iluca (pronounce Ill-oo-jah). The family at the Pensiyon recommended the thermal baths when they heard that I had a cold. We wanted to go on Friday, but our investigations reported only the free outdoor pools where the water temperature was only 28 degrees and there were no changing facilities. That would be too cold and too adventurous for Becky with a cold. So, Scott rode out and explored a couple of the hotels – the Sheraton, and the Iluca Hotel. The Sheraton was 50 YTL per person and had 4 different temperature pools as well as a sauna, steam room, and hamam (traditional Turkish bath). The Iluca Hotel was 30 YTL per person and had two less pools than the Sheraton. In the end, we opted for the less expensive Iluca, which turned out to have exactly what we needed.

Getting to the hotel required that we take a local Dolmus or minibus. This turned out to be much less painful that we anticipated as our timing was bang on. We arrived at the Dolmus a few minutes before it left. There were still many seats available on the 12 seat minibus, so we hopped on. As the bus departed, we watched as the various people moved forward to pay, so we did the same. There does not appear to be someone collecting the tariff, so much as the people offering up the fee. It was also nice to see that the driver makes change, so if you do not have exact change, that is OK. As we approached the Iluca Hotel, Scott managed to say the something to get the bus to stop and let us off. He was imitating the last person who got off, saying something like “eeshee terra”. Neither of us know what it meant, but it worked! (According to our phrasebooks, “inecek var” or “musait bir yerde” are the phrases to use)

The Thermal pools consisted of a warm (33 C) swimming pool of very salty water, and a warmer (38 C) pool of heavily mineralized water. Becky was immediately surprised when she climbed into the pool and began to float. The whole time she was conscientious of where other women were and whether or not it was OK to be in the swimming pool with her bathing suit. It turns out that her worries were for naught, as there were several other women in much more revealing bikinis. Also, there was a photographer there taking pictures. He encouraged us to cuddle in the pool so he could get some romantic shots, presumably for a promotional brochure. We are slowly learning that the tourist areas of Turkey are not particularly conservative!

We took a look at the hamam, but it was co-ed and did not feel comfortable. It was a room about 20 foot by 30 foot all done in marble. It had sinks on the outside edge and a large marble for laying on in the middle – although the large marble in the middle was only about 6×6 so it would be difficult for more than two people to use without touching each other. We are guessing that this is something done just for tourists, and will save the hamam experience for someplace a little more authentic with gender segregated areas or times. It was possible to pay extra for access to a private hamam, but quite expensive.

We both luxuriated in long hot showers after the baths and steam room. It’s amazing how nice a shower can be when you don’t need to worry about running out of hot water or spraying water all over the bathroom! Most places we’ve stayed since arriving in Europe have not had shower curtains, or limited hot water, or both.

After about 2 hours at the Thermal baths, we were ready to head back to the Pensiyon. We walked out of the hotel to see the ocean and were amused that they had a thermometer indicating the ocean temperature – a cool 18 degrees. We then walked out to the road to see the Dolmus approaching. We waved and the dolmus stopped to pick us up. Again, we were amazed out how painless the experience was. We now fully understand why the tourist office agent said there was no reason to take an expensive taxi.

Scott is practicing Turkish with the help of some podcasts and a free guidebook given to us by the tourist office, but to little avail. Turkish is nothing like any language we have previously experienced. Scott says it is good that the spelling is phonetic, but Becky points out that many of the letters sound different than in English – for example the c sounds like a j. Thank-you in Turkish (Tay-su-kur eh-deh-reem) is just as challenging as it was in Greek. Fortunately, the Turks are very good at mime, so usually you can get your message across. We have not had much of an issue yet, as we are in a tourist town, so there is always someone who speaks some English close at hand if we run into significant trouble.

Our experiences so far in Cesme have been contrary to most of what we have read about Turkey. Here we see young couples holding hands, rather than people of the same gender. The women are clearly present in the streets and for the most part are not in hijab. Most women are covered in fashionable long pants and warm sweaters, but that I think has more to do with the temperature than anything else – it has been pretty chilly, and even Becky has wondered around with a bandana on her head at times. Our experience in the Thermal baths emphasized that it was acceptable for women to wear bikinis at the beach or in the pool, and the pools were not at all gender segregated.

4 thoughts on “Resting up in Cesme”