When we left Trenton this morning, the sun was shining. There were a few scary clouds in the sky promising rain later in the day. There was a Hercules airplane flying overhead. It was going in circles and occasionally coming rather low. When we were close to the base it felt like it was doing a low altitude flyby to check out our bikes! I suspect they were doing some kind of pilot training, practicing touch downs and take offs. Plane flying over Trenton and some scary clouds.

The ride time today wasn’t long and the route not very exciting (chosen for its directness not the scenery), but by the time we pulled into Napanee I was definitely ready to not be on my bike. It was disappointing because the road was mostly flat or slightly downhill. I was strong when we started out this morning, so it would have been an excellent day. Unfortunately, with effectively one gear, I tire quickly. I am forced to power up hills, often leaving Scott behind. This may seem good, but it puts a lot of strain on the knees and quads, so I must be extra careful not to injure myself.

To add to the pain of the day, the weather didn’t cooperate. It rained a couple of times, such that we were happy to have decent rain gear. The biggest challenge with riding in the rain is keeping cool. Our raingear keeps us dry (mostly) but then also keeps us warm, which isn’t really necessary when it is 18 deg outside. The temperature was just wrong, such that if you didn’t have wet weather gear, you got too cold, but with it you cooked. Adding insult to injury, after about 30 km, we discovered that I had lost a screw for my cleat. This means that I can’t safely “click-in” to my pedal. Fortunately I have pedals that have one side flat, so I can use them without cleats. This makes me slightly less effecient uphills. It is just good that todays ride didn’t involve many hills!

All that being said, I’m actually have a good time. We stopped at the second hotel we passed. It was cheap, has Internet, and we have a covered patio where we could cook dinner. It turns out the nearest bicycle shop is only about 500 m (if that) away. There is some hope that they will have a screw for my cleat :).

Scott is disassembling the shifter this evening, so see if he can figure out what is wrong. We are looking into requesting that we get replacement “stock” Roloff shifters.

Tomorrow we plan to ride 40 km into Kingston. From there, one of us will take a bus or train home to pick up the car and bike rack and return to Kingston.

Unfortunately the more I look at the shifter, the more I differences I see from the stock Rohloff shifter. There’s no c-clip holding the twist shift on as far as I can tell, and to disassemble it completely looks to require disconnecting both cables from the cable box on the External gear mech down at the hub. Without spare cables to replace them with, and with no information (yet) from HP Velo, I’m very hesitant to pull things apart. At least at this point Becky can still shift with difficulty…

Becky thought the road was flat or downhill, but I think that’s because she’s getting stronger. I looked on toporoute.com and we ended the day slightly above where we started, with a number of hills in between. I’m using Toporoute for this because I don’t trust my GPS altimeter in weather like we had today, since it measures altitude using barometric pressure. When we stopped for lunch, the altimeter read -40m, and changed to +60m while we were eating. Given the nasty weather, I’m not surprised by the shift in barometric pressure, but it does seem to play havoc with the GPS measurements. 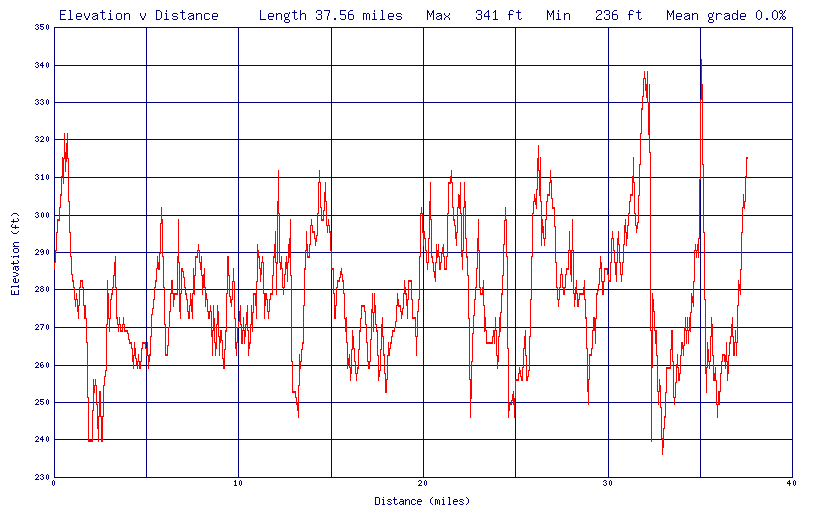 Charts from the GPS, including an insane elevation chart due to barometric pressure swings and a speed chart which isn’t quite right either – courtesy of dead batteries just before we stopped.

4 thoughts on “One pedal stroke at a time”