We had a week to kill before our reservations at Green Turtle Lodge, and no idea what to do with it. We don't really like big cities, and there is very little “tourist” infrastructure in Ghana, so getting around and finding places to stay wasn't easy. Inspired by Marie McCarthy's kindle book Travels in Ghana, we decided to hire a car & driver through one of the tour companies. We requested quotes from both Easy Track Ghana and Jolinaiko Eco Tours. In the end, we choose Jolinaiko largely because they had a much better price and seemed a little more flexible. Since we were returning from Benin, we wanted our tour to start in Aflao (the town at the Ghana border with Togo) and end at Green Turtle Lodge, where we already had reservations. The tour would serve the dual purposes of allowing us to see parts of Ghana we otherwise would not see, and it would allow us to get to Green Turtle Lodge without having to go back to Accra! In the end, we booked a 6-day tour, that involved visiting a Kente weaving village, an eco community, hikes to the second highest “mountain” and a couple of waterfalls, a palm wine brewery, a monkey sanctuary, a bead factory, the Akosombo Dam, a Lakeside lodge, and a slave castle. It was a busy 6 days.

We took a car taxi from our hotel to the Ghana border. It wasn't far, but with all our gear it certainly made it easier to avoid all the border chaos on the Togo side. The actual checking out of Togo and checking into Ghana went smoothly. Just as we had arrived at a the border, we recieved a call from our driver, Fofo, saying that he had arrived in Aflao. So all we needed to do was walk away from all the touts at the border and find him. Having already arranged transportation made it much easier to get away from all the drivers offering rides to Accra.

We found it interesting that the border staff on both the Benin and Togo sides asked why we didn't speak French. In their experience everyone from Canada speaks French. We found ourselves repeating in our very broken French that only about 30% of Canadians speak French, and that most, are Anglophone. We suspect that because Benin and Togo are French speaking, it is more common for French speaking Canadians to visit here. English speaking Canadians are more likely to visit Ghana.

Initially, we couldn't find the meeting place, but we were pretty obvious – two yovos standing looking at their phones – so it didn't take long for Fofo to find us. Soon, we were introduced to Fofo's beat-up 4×4 Landrover (no air conditioning). We had been informed by Jolinaiko Tours that morning that the air conditioned 4×4 we had been promised was broken, and that instead we would be using Fofo's Landrover for the day – with the other vehicle and driver to meet us that night.

Before leaving Aflao, we stopped at the bank machine to get some Ghana cash (Cedi). This time we used Eco Bank. At first, Becky couldn't get money, but soon discovered that it didn't work when she tried to enter a dollar amount, but worked fine when she just selected one of the values from the screen. The machine only let us take out 400 Cedi at a time (about $200). Since we had to pay the tour company in cash, and almost all our expensense would also be in cash, we each widthdrew 400 Cedi, and realized that along the way we would need to find another bank machine. In hindsight, we should have each done multiple widthdrawls (which we later discovered was possible). The Ghanian Cedi bills are thicker than the Canadian Dollar, so $200 in Cedi (mostly in 10 Cedi notes) makes for a crazy thick wad of cash!

Our first tour stop for the day was at a Kente cloth weaving village. It wasn't really a village so much as a warehouse just off the main road. Becky was struck by how all the weavers were men. We paid a small fee to take pictures, and Scott took the opportunity to talk to some of the weavers. It takes them a long time to make a swath of cloth. Becky was surprised to learn that the cloth was made of a rayon-cotton blend. She expected it to be more of a traditional handmade thread.

It was 1:30 pm and we had not had lunch yet. Becky was starving. Our driver, Fofo, decided to take us to a museum before lunch. Since we paid an entrance fee for the not very impressive museum, Scott used that opportunity to ask the man there more about Kente cloth. After our quick museum visit, we headed out to a hotel restaurant for lunch. One thing to remember about restaurants in West Africa, when you order your food you can wait 60-90 minutes before you see it. Even if what you order is a “simple” dish. This certainly has put our local (Ottawa) Ethopian restaurants into perspective – since we are accustomed to North American restaurant time standards, we always thought the service at the Ethopian restaurant was really slow – now we realize that it was just authentic timing!

After our late lunch, our day was not over yet. We thought we were headed towards our hotel as the day was getting on, but it turned out we were making our way to the village nearest the second highest mountain in Ghana – Mount Gemi. The drive up to the mountain village, Amedzofe, reminded us very much of a trip up to Monte Verde cloud forest in Costa Rica. The roads really needed a 4×4 to traverse. There were a lot of hair-pin turns and rough patches, but as we climbed the views were spectacular. When we arrived in the town the weather was looking rather threatening, with thunder storms approaching. Rather than stop at the visitor centre, we picked up a guide and headed straight to the base of the trail. We would do the hike first, and then return to the visitor centre to register. Our 4×4 made it most of the way to the top, leaving only a short 10-minute hike.

The hike and the discussion with the guide turned out to be the highlight of our day. The guide told us about his community and the neighbouring communities of the same “tribe”, six in total. They shared a language and were lead by the same chief. There were no trotros (mini-van buses) between the villages, and although you could see them all from the mountain top it was not easy to get from one to the other. To visit a neighbouring village you needed to hire a car and it could be over an hour drive.

Our final destination for the day was the Biakpa Mountain Paradise Lodge. Unfortunately, the open air bar that overlooks the valley, which they are famous for, burned down the week before. It was a shame, as we could see the charred remains of the deck and the hillside that had burned. Fortunately, the restaurant was still operational and had a nice atmosphere. Upon arrival, we were asked to place our order for dinner. We would soon learn that this was a normal practice – ordering your meal several hours before you wanted it. After ordering and confirming how long it would take, we recessed to our room for a nice cool shower before supper. For supper Scott ordered ground nut (aka peanut) soup with chicken and fufu (ground cassava). Becky ordered stirfy vegitables with rice. When the food came, we both got ground nut soup with chicken, Becky got glutenous rice, and Scott got fufu. We would soon learn that even though something is on the menu doesn't mean they actually have it! Although this was the only place where they didn't tell us they didn't have it – they just substituted for what they had. Fortunately, the groundnut soup with chicken and rice was delicious.

It was our first stay in a “budget” range hotel in Ghana, so we didn't know what to expect. It was certainly adaquate for our needs, but we were happy to be carrying our own bednet. This was the first night that we felt we actually needed it (we had used it at Marianne's but she also had netting in the windows and it wasn't really necessary there). In highsight, we would rate the hotel poorly. Compared to the other budget places we stayed in Ghana, it was expensive and not particularly clean. 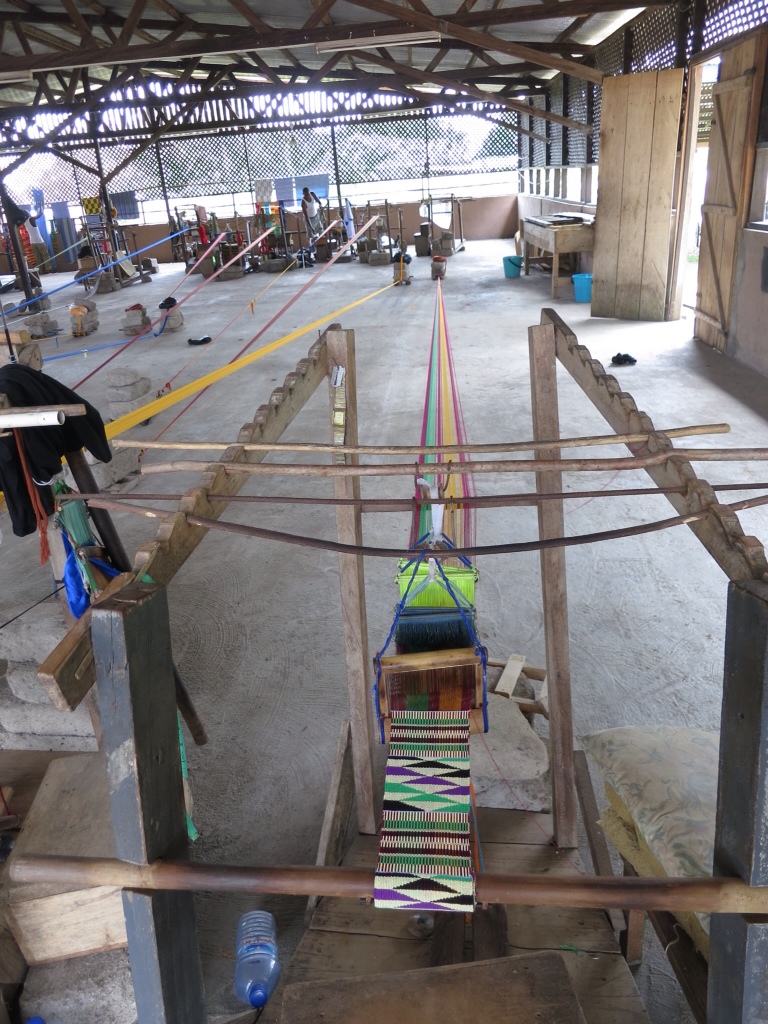 The Kente clothe villiage. This particular place seemed to be the place where several different guides brought their guests – as there was another group of yovos arriving just as we left. 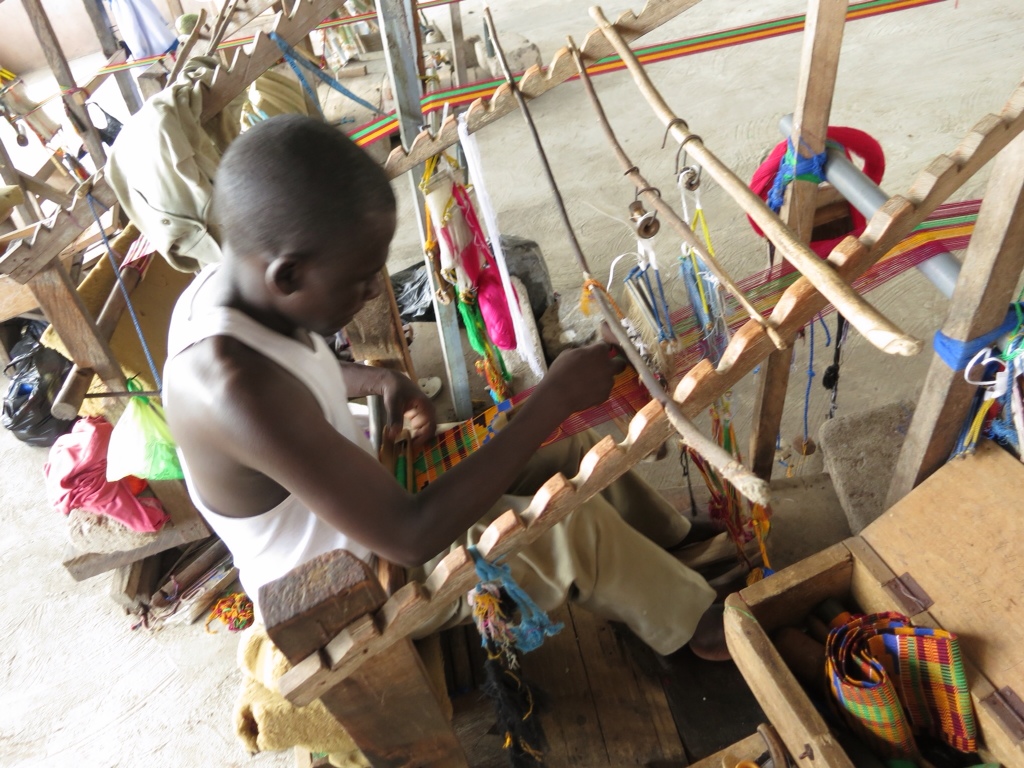 A weaver at work. 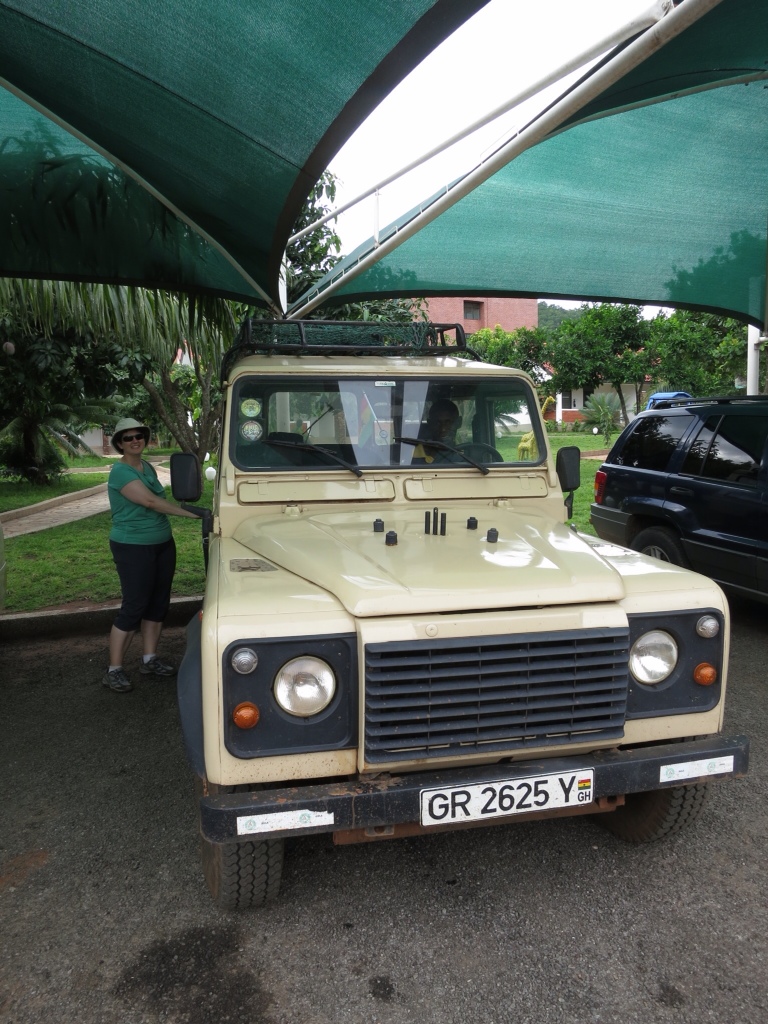 Becky climbing into the backseat of the Land Rover. 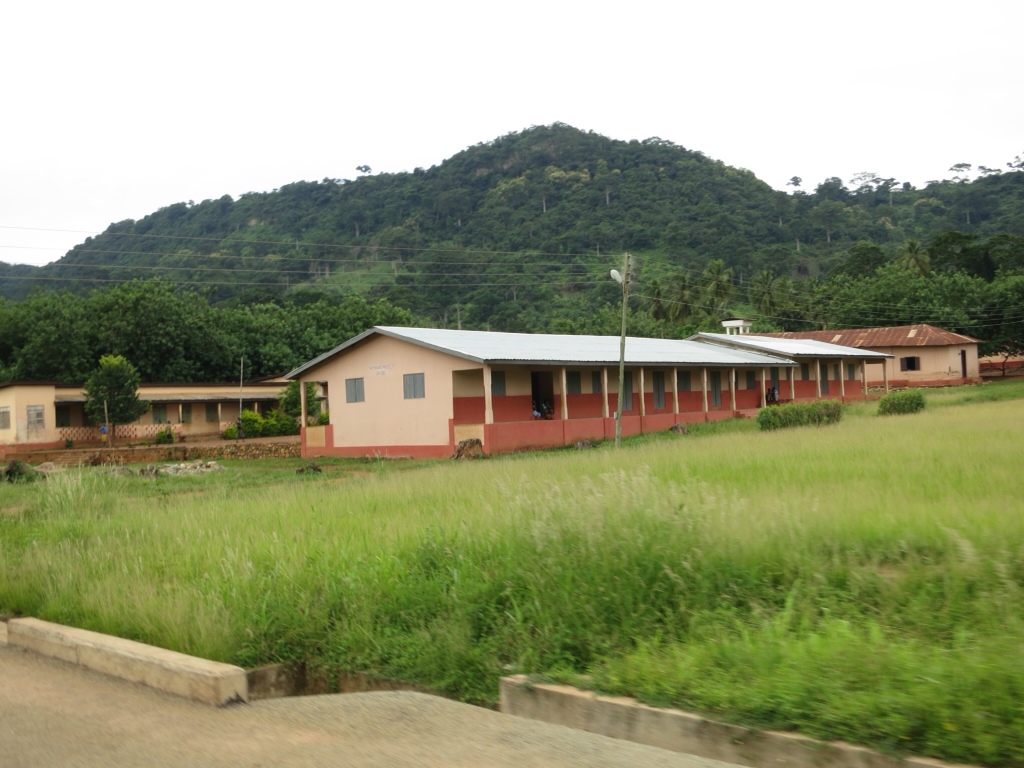 A typical Ghanian school house. We found it amusing that the buildings were painted using the same colour scheme as the children's uniforms. The tan/brown uniforms were worn by students of the government run schools. 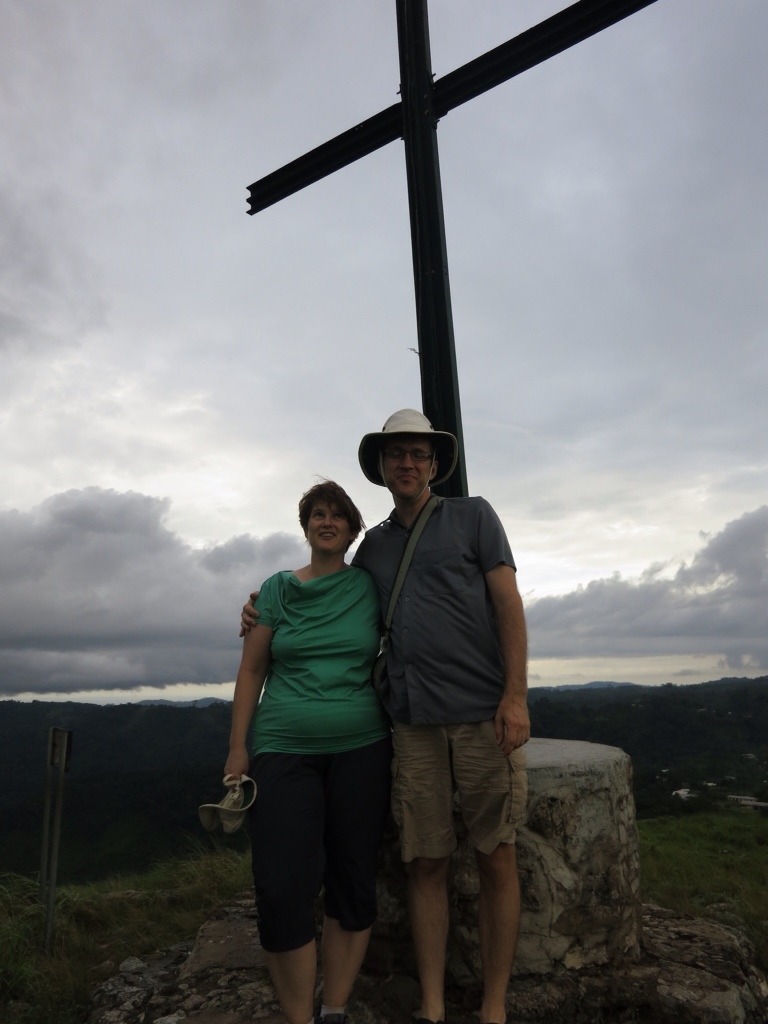 Standing atop Mount Gemi, as the weather moved in. 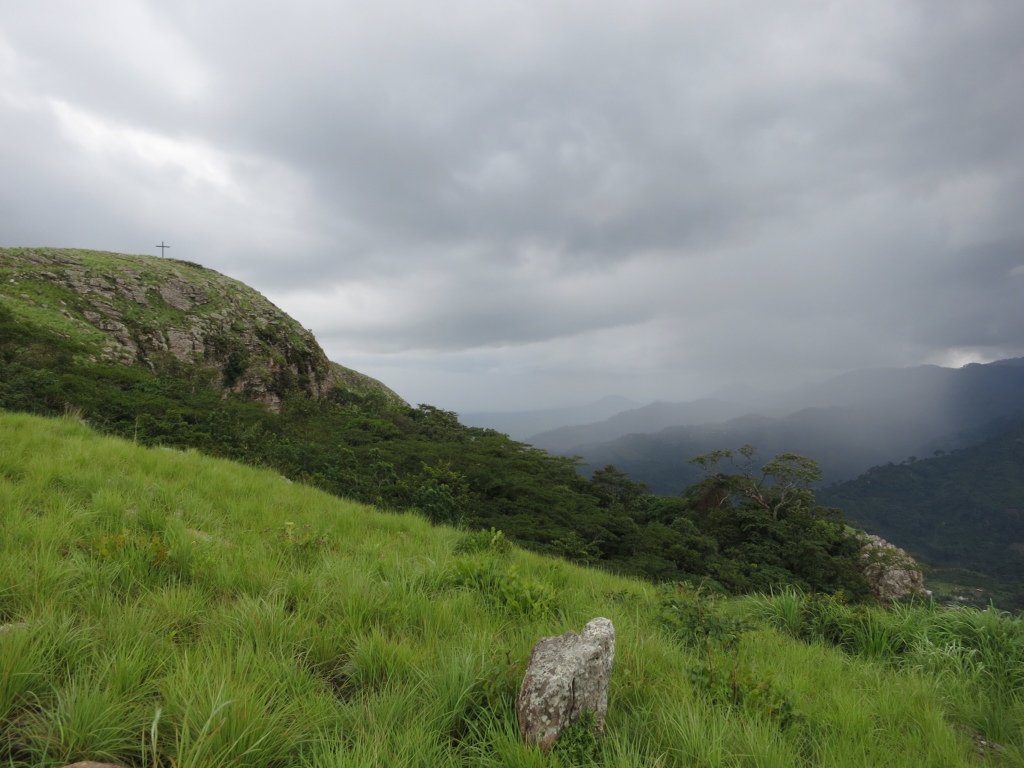 If you look closely, you can see the cross at the top of Mount Gemi on the left side of the picture, and the rains moving in on us. 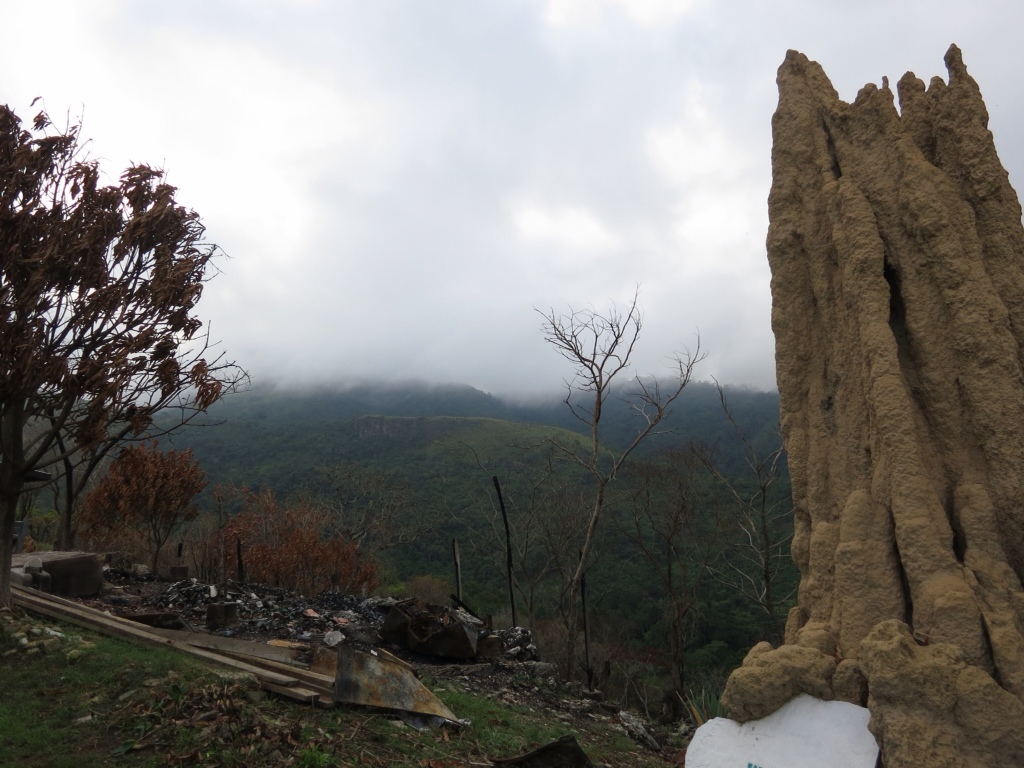 The charred remains of the bar at Mountain Paradise alongside a large terminate hill. 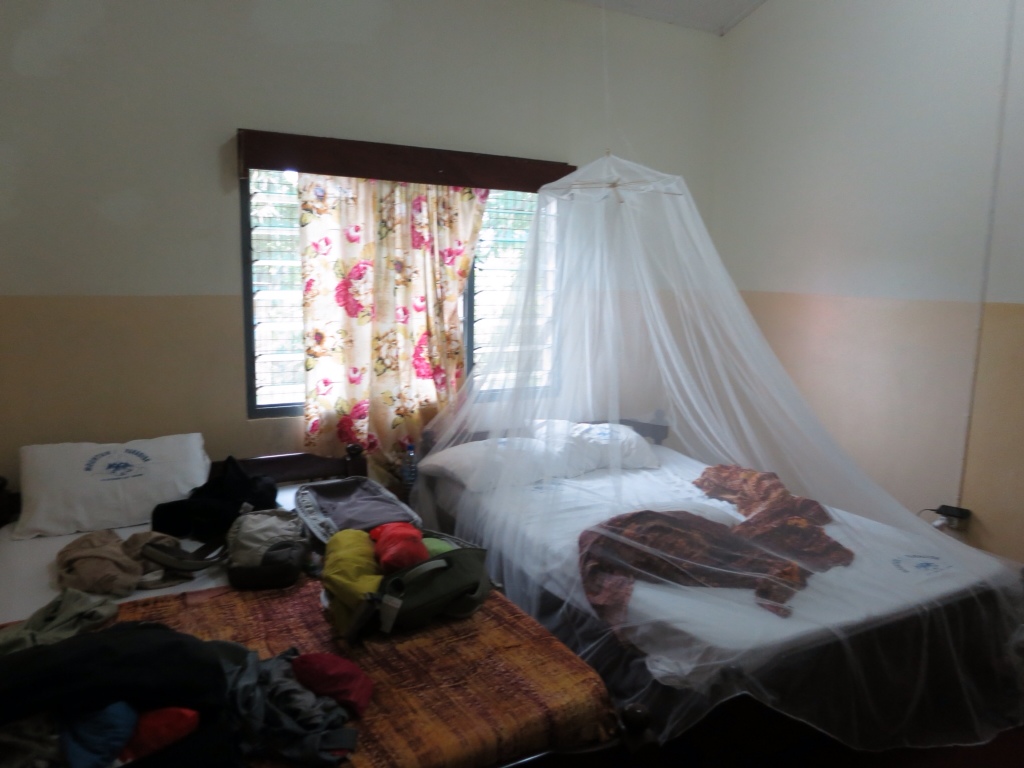 Our hotel room with our bednet hung. 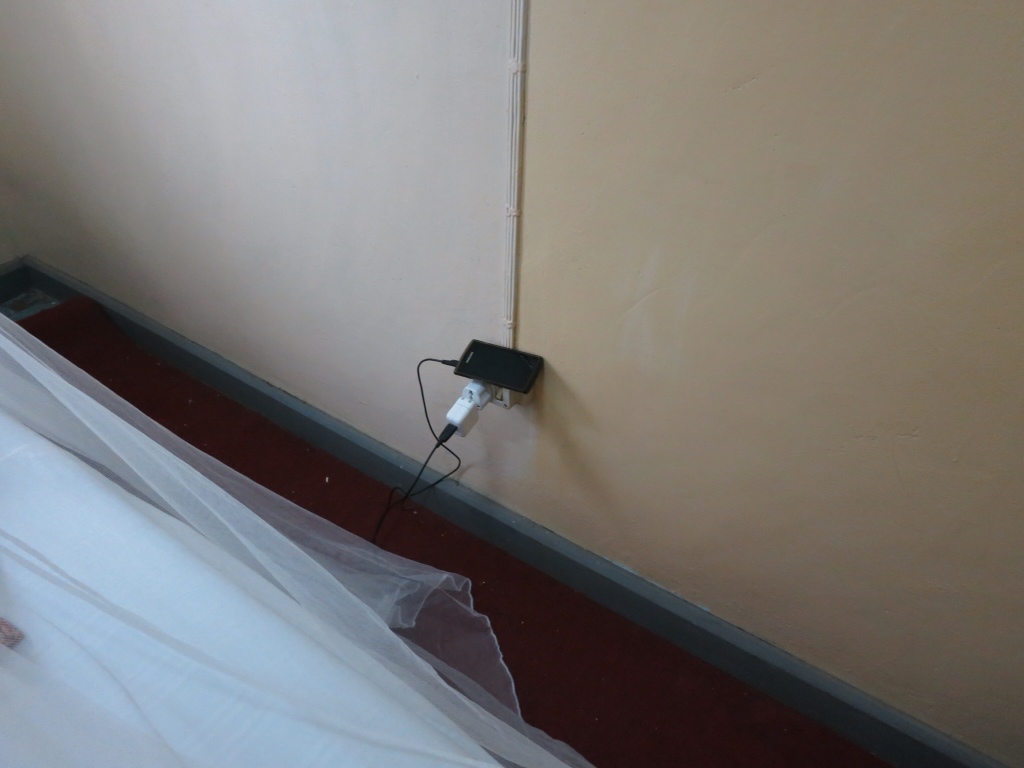 Compared to Benin, the Internet we received from my phone was “high-speed”. When the phone is acting as an Internet router, it eats the battery, so we had to plug it in while we used it.