Track to Ottawa airport.
Track from Charlottetown airport to Dovern B&B and some touring around Charlottetown.

Departing
We got up early, but still didn’t leave the house as early as I to would have liked. We were a little surprised when the alarm went off at 5:30 am and it was still dark out. By 6:00 am, the light was better and we were packed and on our way by 6:15 am. So far, So good. We arrived at the airport at 6:45 am. This was a little later than I had hoped but still lots of time for an 8:15 am flight. 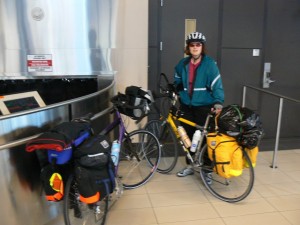 Becky and the bikes
My approach to packing changed last night after a test ride, my original thought was that I would just strap my duffel and backpack onto the rear rack. However, when to did that, the balance was off. The century gravity was too high, making the bike difficult to balance and manoeuvre . My second approach was to place the contents of the duffel into my panniers, and place only my back Back and empty duffel on top. This worked out OK.

What I’d Change
For our next trip, I’ll rig the front panniers. Also, I will get a larger collapsible duffel bag. The front panniers would allow me to move the contents of my backpack onto the font rack, which would make the bike much steadier. We took turns going to the washroom to change into comfortable clothes for the flight.

Packing up the bikes
Once we arrived at the airport, we quickly began preparing for the fight. The gear was unloaded from the bikes and packed into duffel bags. 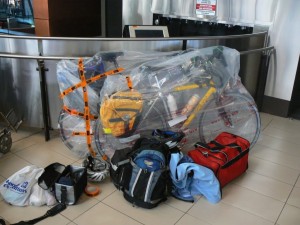 To prepare the bikes for the plane, the handlebars must be turned and lowered, the peddles must be removed, and some air must be let out of the tires. Finally, the bikes are rolled into large plastic bags and taped shut. When I thought Scott hand things under control, I went to the line to check us in. I soon discovered that things were not running as smoothly as we had hoped.

Waiting
The line was not moving. It was not clear to me why, but the area did appear rather cluttered. When I asked an agent, he explained that the baggage belt was broken. He said not to worry as most flights would be delayed 1-3 hours as a result (the belt broke yesterday as well). We were thinking “oh well, we will get there when we get there. “

After waiting in line for what seemed like forever, I was finally next in line. The agent turned the sign to closed and left! We were stuck in a line with no agent!

After about 10 minutes, I mentioned to an agent that wasn’t helping any one, that we had bikes that we needed to pay for. She then allowed us to pay for the bikes and she checked us in. It was very much a relief to get to this point.

We had not had breakfast and I was starving. By this point, the time for our fight didn’t matter to me. I just want to get some food. We dropped our bags off at the oversize counter (the only belt that was working). They hand carried our bikes down to the luggage area and placed our duffels on the belt. We headed to security. Scott checked the departures board, which directed us gate 13. Gate 13 is at the far west part of the new airport. Upon arriving at gate 13, we discovered the flight was actually leaving at gate 21. Gate 21 is in the old part of the airport (to east!). Scott felt the need to rush to our gate. I figured all flights were delayed and I wanted milk for our cereal. So I sent Scott to get milk while I made a pit-stop. We the proceeded to the gate. Scott rushing and me progressing at a leisurely pace.

Half way to the gate, Scott decides to go ahead to see what is up and I figure I’ll take a look at the books in the bookstore before heading to the gate. A moment later we hear “Final boarding call for Jazz flight to Halifax” Ack! That is our flight. We run to make our flight, hoping our bikes make it. When we arrive at the gate, we are shown to our seats. We do notice our bikes being loaded onto the plane. We sigh with relief.

On the first plane
Our first flight is to Halifax. The flight leaves only 25 minutes late. There is actually hope that we will make our connection to Charlottetown. We relax on the plane and have our breakfast. Unfortunately, the milk Scott picked up specifically for Becky is Sour =(. Fortunately, Scott has enough of his milk to share! We arrive in Halifax well, with plenty of time to transfer to Charlottetown.

In Charlottetown
We arrive to watch the baggage guy drive the truck into the ditch. He decides to move the baggage carts by hand; which was rather amusing. 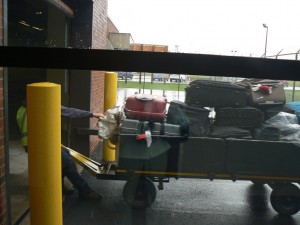 Unfortunately, we were soon to discover that Scott’s bag didn’t make it. Fortunately, my bag did make it. so Scott borrowed some sending clothes and we setup our bites and headed out. It was a beautiful afternoon in Charlottetown. We easily navigated our way to the confederation trail. At one point we observed some row houses that were painted in nice maritime colours. We enjoyed the short ride from the airport to the B&B we are were staying at. We arrived at the B&B, dropped off stuff and headed to the bike shop to check in. At treble shop we relieved our packets. Then it started to rain. Really heavy rain =(. Unfortunately, without Scott’s luggage, he didn’t have any wet weather gear or a jacket of any type. This made for a cold afternoon ride ,that was cut short due to weather. 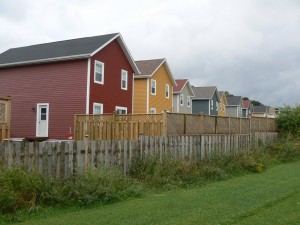 A lovely dinner
After drying off and warming up, we headed out to the “Piece a Cake” restaurant. The food was excellent, the ambiance was excellent, and the entertainment was excellent. It was a thoroughly nice evening. During dinner, I got a phone call telling us the luggage had arrived. So, as the title says, all is well that ends well. We are here, we are dry, and we are ready for a good nights sleep! Cheers.