Today we took the ABC bus to from Accra to Cotonou. The bus cost was 79 cedi each (about $40). We also paid 20,000 CFA for Togo visas (about $40 each). The bus company guy did a really good job of guiding us through the visa crossings – which was really nice – it made the process feel much less stressful.

Before the bus departed, the pastor for the bus company came onboard and conducted a short prayer services – this was a bit interesting. At first we were afraid it was going to last the entire journey, but alas, it was a quick 10-15 service involving some preaching, a mention the Jesus was driving the bus, and a hymn in which many of the people on the bus joined along. After the prayer service was over, we enjoyed some African music for about an hour or so, then a couple of African style Bollywood movies played – the first involving a lot of women beating up men (I didn’t really get the plot to this one), the second involving an old impotent king and his harem of beautiful young ladies. The production quality for the movies was not particularly good, with uneven audio (clearly filmed using shoulder-mounted cameras) and cheap often very fake looking props.

When we reached Togo, we needed to purchase a Togo visa. This cost us a little more than expected, but also it got a little confusing. Just as the customs guy was telling us the cost, which was more than we expected, so we had not changed enough money, a gust of wind picked up and spread sand through the air, which was soon followed by down-pouring rain. In the flurry of making sure passports didn’t fly away, we lost track of 10,000 CFA (about $20). I suspect that when Scott thought he was passing it to me, he was actually passing it to someone else, who, in the confusion just pocketed it. Oh well, lesson learned, we need to be more careful with money around border crossings. Overall, the visa process was pretty painless. The amount people pay is based on nationality, and it appears that Canadian’s get one of the higher prices 🙁

In Togo, we saw beautiful sandy beaches (alternating with piles of plastic trash), with roaring surf – you certainly would not want to even try swimming in it. There were people lined up on the beach, such that it looked like they were playing tug-of-war (20-30 people on each side), but actually they were trying very hard to pull in some fishnets. We saw very few people out-and-about while in Togo, perhaps because it was raining.

Overall, the bus wasn’t as nice as I had been lead to believe by what I had read, but it was quite nice by African standards. The seats were a little cramped (my knees often hitting the seat in front of me), but the air conditioning was well set (not too cold, which is a common complaint on the VIP buses). The on-bus toilet was clean and stayed clean throughout the journey! This was partly because of the design – the toilet seat has a spring that help it in the upright position, keeping it clean, but also because the bus attendant informed everyone at the beginning that the toilet was to be used for urination only and that the red button was to be used to flush the toilet (not everyone understood the latter point). Compared to bus travel in the Middle East, it was not nearly as nice as Turkey, but much nicer than Syria and Jordan.

Our first impression of Benin is that it appears more developed than Ghana, but our hosts tell us that Benin is actually much less developed. We have only seen a small part of Cotonou. Whilst visiting last night we were encouraged to try out taking a bush-taxi (shared) for our return to Ghana. We can taxi from here to Lome (the capital of Togo, right on the border of Togo/Ghana) and then hop onto a tro-tro or shared-taxi in Ghana. Logan gave us a few tips on how to do this on a more reasonable budget (when using shared transport everyone pays the same amount, unless you buy an extra seat, but the price is fixed per seat making it much easier to not be overcharged), but it sounds like we don’t even need to be that good at negotiating to do the trip for much less than the cost of the bus, and it gives us more control over where we end up and when we leave (but does mean there are no toilets on the bus). When I requested our Visa, I had thought we had given ourselves a lot of time in Benin, but it turns out we must leave by the 29th (the date on our visa). So, we shall plan to leave Benin on the 28th or 29th and travel to a bit of Eastern Ghana before return to Accra for a day and heading out to the Green Turtle for a few nights. We might spend one night in Lome – we will see how adventurous we are feeling.

We completely missed the time change when we arrived in Benin. It wasn’t until we went to bed that we realized that half our devices were on one timezone and the other half were on another! Benin is 5 hours ahead of Eastern Canada at this time of year, Ghana is 4 hours ahead.

The stadium in Cotonou. Although there was lots of water from the rains on the ground, there was no running water in the ABC bus station toilets 🙁 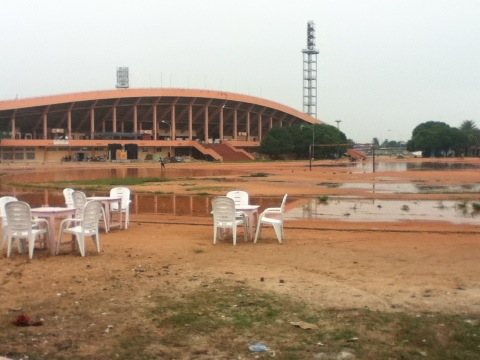