Saturday and Sunday night we are couchsurfing with a generous local host Aba. Aba’s family is from the Cape Coast area but her parents move to Accra so this is where she grew up. She runs a catering company, cooking food on contract for weddings and other special events.

Before coming to Aba’s house, we stopped by the ABC bus terminal to buy our bus tickets for Cotonou. We leave at 6:30 on Monday morning (needing to be at the terminal at 5:30 am) at a cost of 79 Cedi each (about $40). We were slightly delayed heading to the bus terminal by a rather quick approaching downpour. The storm began with a crash as one of the windows in the hotel restaurant suddenly slammed shut, shattering the glass. We decided to lounge around at the hotel for an extra hour in hopes that the storm would blow over – which for the most part it did.

Our taxi ride out to Aba’s was a bit of an adventure. She lives much further away from downtown than we expected. We tried to negotiate the rate down, but really, for 10 Cedi we got a pretty good deal – it was at least three times further than any previous rides which we paid 10 cedi, 6 cedi, and 5 cedi. Scott had actually negotiated down to 9 Cedi, but felt guilty after we figure out how far it was and gave the driver 10. The drive was also very interesting, as we passed out of downtown Accra into the less developed suburbs. Some of the areas we drove through were pretty poor, and seemed more like stereotypical Africa than downtown Accra.

We arrived at Aba’s (fortunately, Scott gave the cell phone to the driver, and Aba provided specific directions), to meet several friendly people: Aba, her sister Nancy, and neighbours and other relatives. The storm had knocked out the power (and we saw a some damage to billboards – some blocking streets – and houses as we drove). Apparently, the rain is normal, but not with such sudden winds. In addition to the power being out we were also without running water. Good thing we are adventurous, as this is definitely interesting.

We enjoyed a wonderful dinner by candlelight with Aba and her sister Nancy – fried chicken, cabbage and carrots, rice and a red sauce that was like spiced ketchup. Nothing too spicy, which made Becky happy. We had some great conversation talking about politics, gay marriage, religion in schools – pretty much everything you are taught not to talk about – I think everyone learned something and had a good time.

By 9 pm we were getting ready for bed. Still no power, which is unfortunate, as it means we hear the neighbours generator and the ceiling fan doesn’t run. It also means the water isn’t running, so we are flushing toilets and washing hands using a large rain barrel (just like the ones we have at home), that was filled the last time the water was running.

We are starting to figure out how things work around here, but are still feeling pretty out of our element. Tomorrow, we are not at all certain what we shall do with ourselves. We do know that we need to over our Canadian sense of politeness and start asking more questions about what is culturally polite behavior. 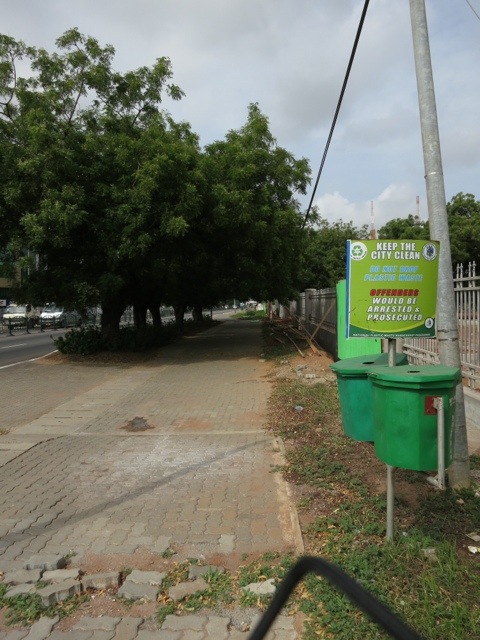 The neighborhood where our hotel is very clean. 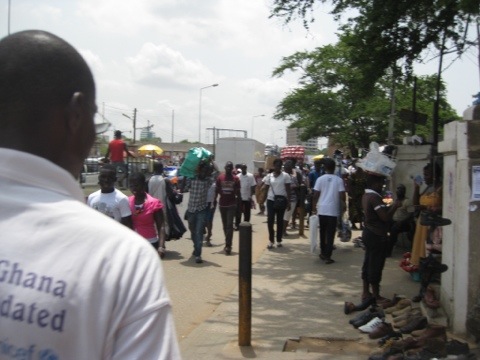 We went for a walk near downtown and saw many women selling things that they transported on their heads. 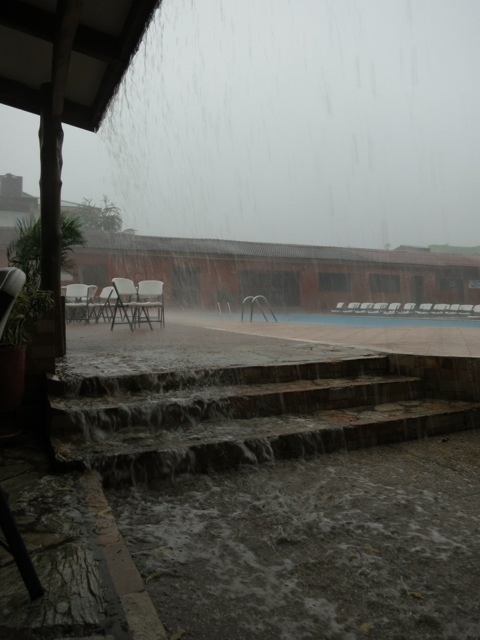 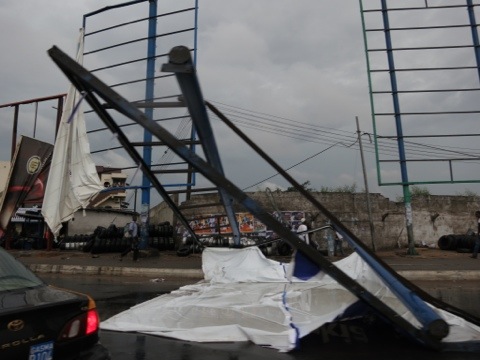 A billboard that broke during the heavy rains and winds. 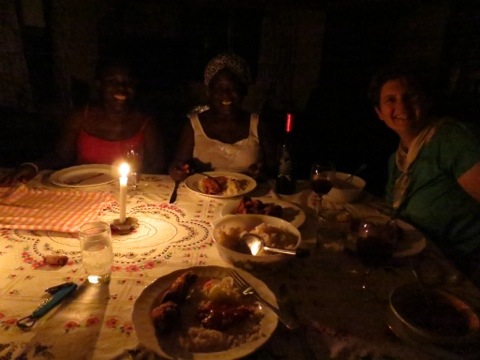 1 thought on “A visit with locals”