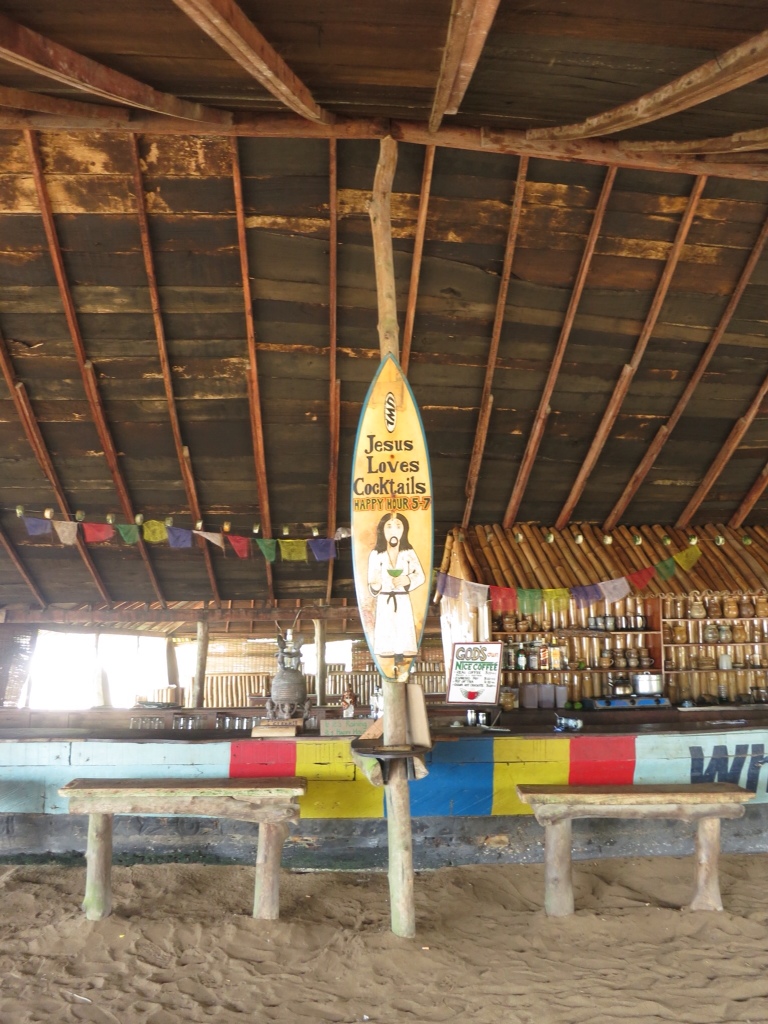 Our last four nights in Ghana were spent at Green Turtle lodge on the coast near the Cote D’Ivore (Ivory Coast) border. 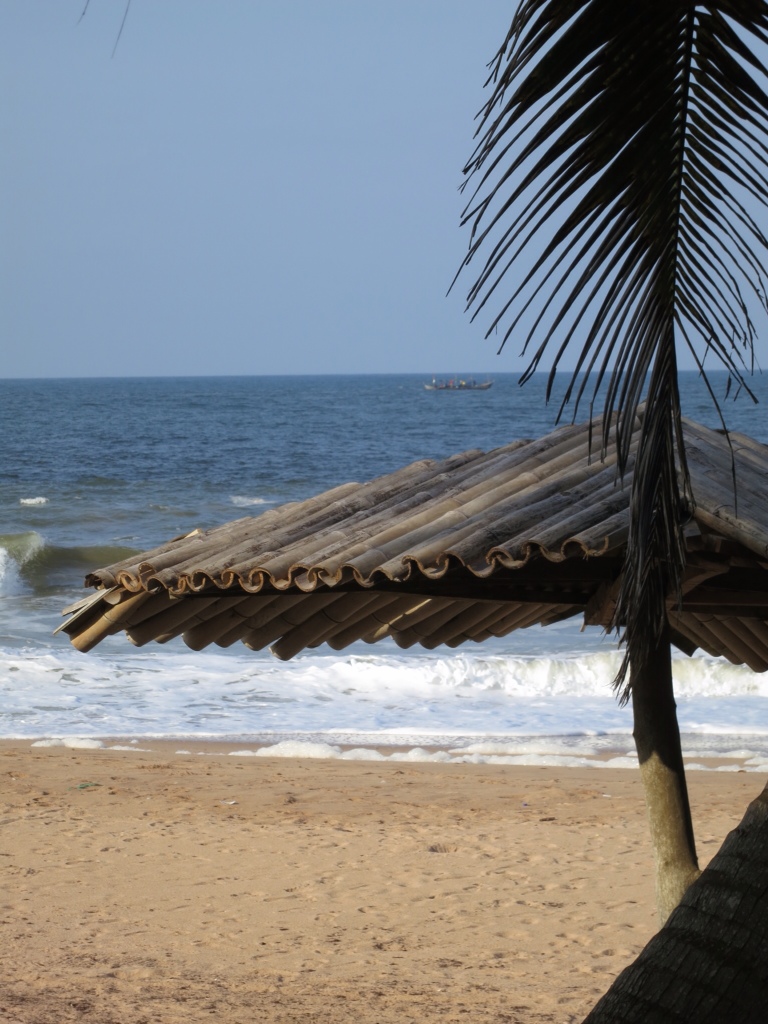 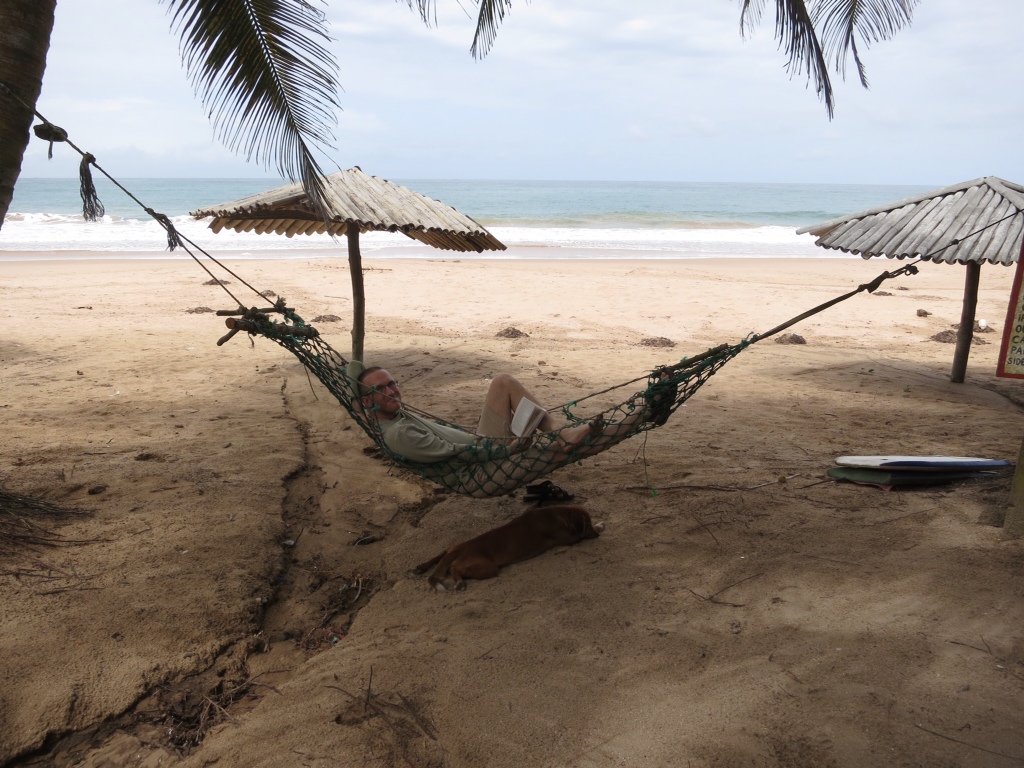 Much of the four days was spent relaxing by the beach, reading and napping. Unfortunately, we couldn’t get Internet (no MTN coverage, had we had an Airtel or Vodophone SIM, we would have had coverage). This is one reason why people in Ghana have more than one SIM card for their phones – some areas are only covered by one or two carriers. No one seems to cover the entire country. 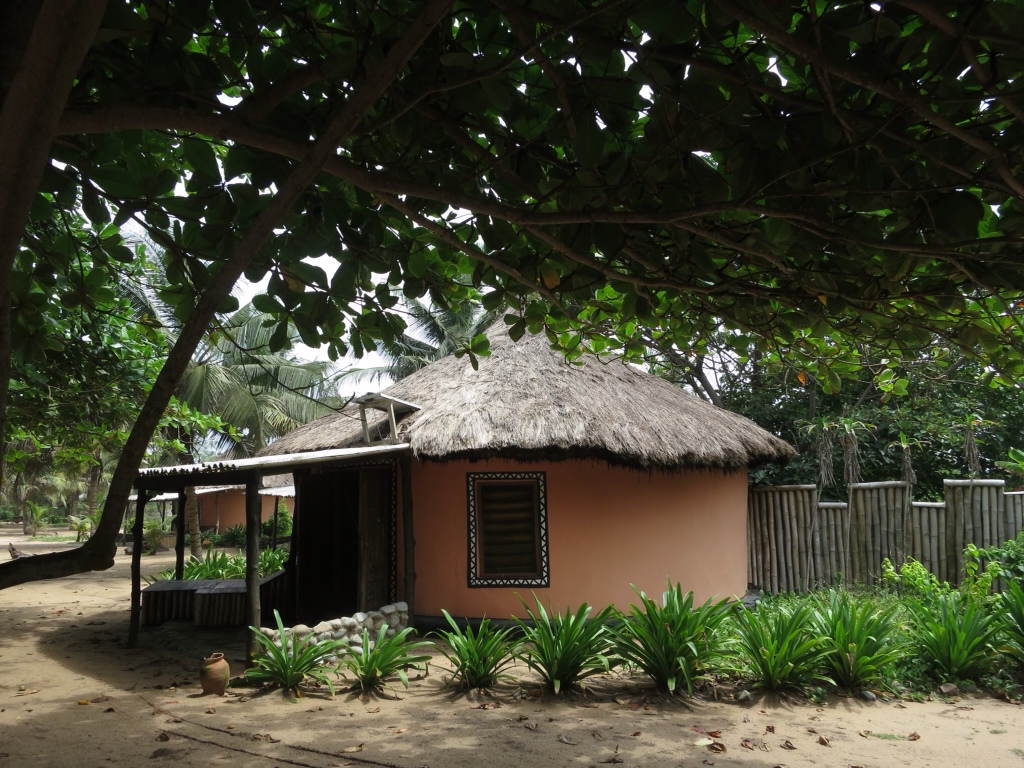 We had our own little hut. We opted for the less expensive hut that didn’t have built in facilities. Instead we used the shared composting toilets, which were kept very clean. The outdoor showers were definitely highlight, with lots of space and enough water pressure to rinse the soap and salt out of your hair! Our rooms, however, did not have fans. Each room had a solar panel that provided enough electricity to run the light. There was no outlet or other electricity in which to run a fan. We were, however, able to charge our varioius devices using the bar power strip (which was also solar powdered). This was quite adequate on sunny days, but on cloudy days they need to use most of the power to charge the batteries for the fridge (cold beer being a priority)! 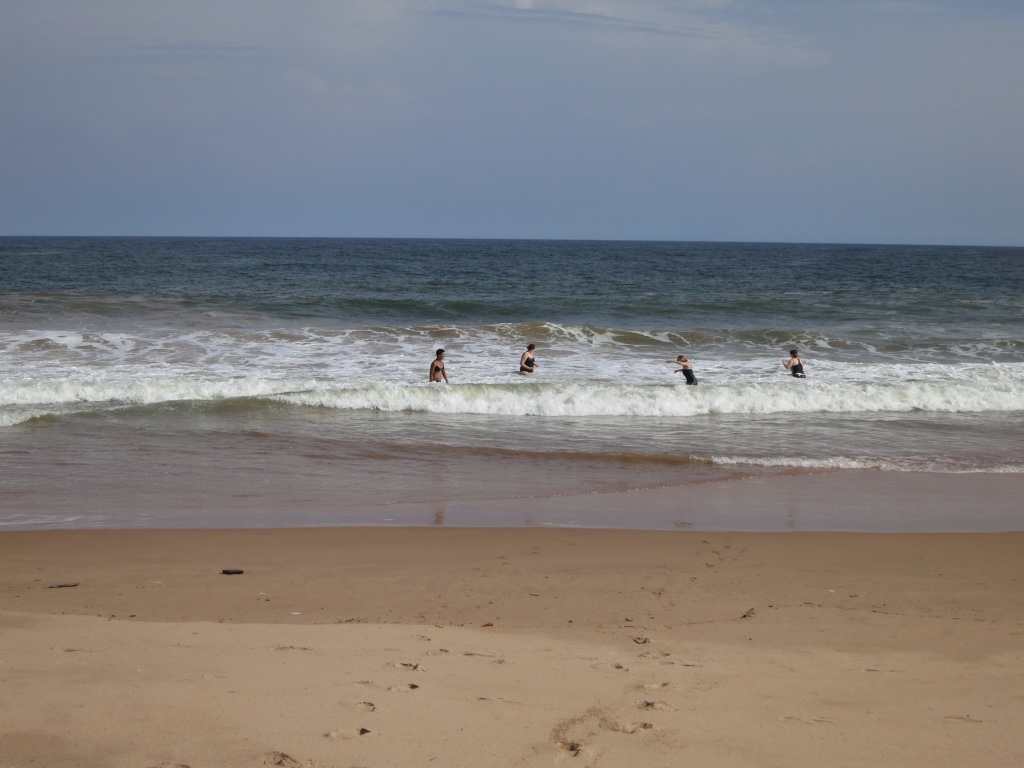 Shortly after arriving, we met a group of medical doctors (or soon to be medical doctors) who had been studying International Medicine and doing research placements in Ghana. They were finished their work and on a well needed vacation before heading back to the UK to finish their schooling.

The first morning, we went to try out swimming in the surf. It was a relatively calm day, such that we were able to get past the breakers and enjoy bobbing up and down – although we did notice the tendancy to drift out – so we kept an eye on how far we were from the shore. Swimming back in afterwards, Becky was reminded of the force of the waves when she was knocked down in the shallow waters and bumped both her knees on the bottom (ouch).

The next mornings swim didn’t go without incident. The waves were certainly more powerful. We were not able to get out too deep as we kept getting pushed back in. The force of the breakers and the accompanying undertow were a reminder of how powerful things were. One of the doctors got out a little too deep, and then got stuck with too many breaking waves too close together. She would barely get her bearings and get hit again by another wave, with each wave trying to pull her out further. Fortunately, the water wasn’t too deep where she was that Scott was able to still reach the ground. He quickly swam/walked out to her and helped pull her in past the breakers and back to shore. From that point on, we were very careful not to get in too deep (actually, Becky choose not to go in again, as she had been knocked down unexpectedly a couple times that morning in the water that was only waist deep).

One morning Scott and the doctors went out for a canoe tour in the nearby mangrove (operated by some people from the nearby village). Becky was finding it difficult to sleep at night, and the early mornings was the only time she slept well, and she didn’t want to give up the sleep for a canoe trip. As she enjoyed some uninterrupted slumber, everyone else enjoyed a canoe trip. 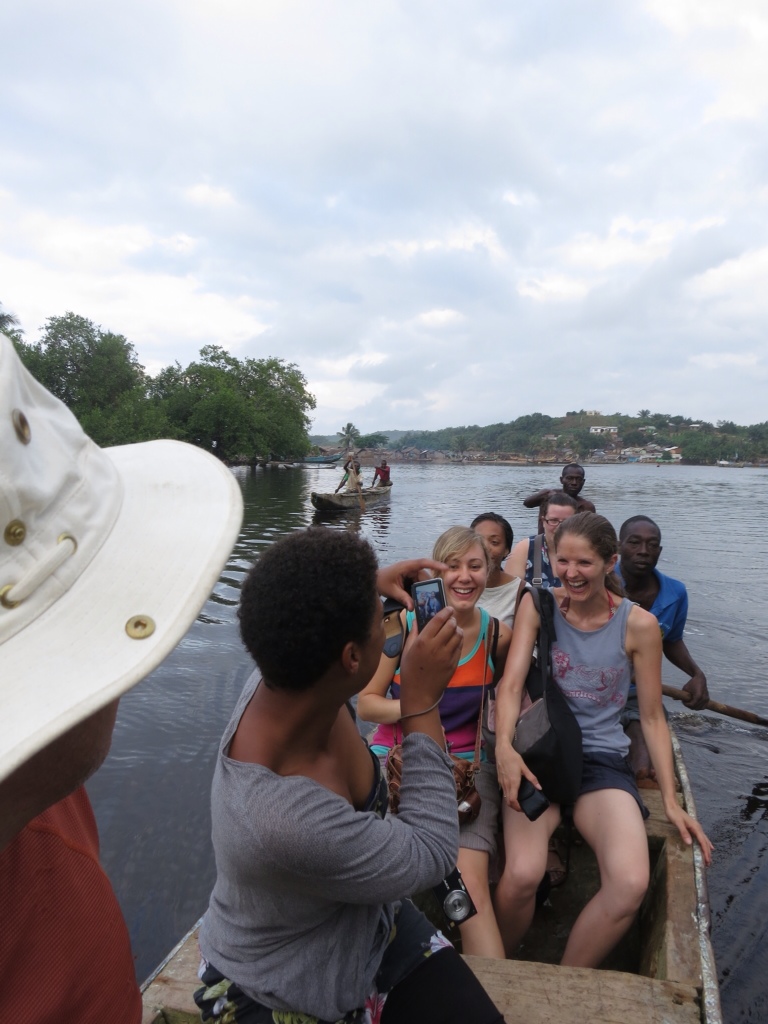 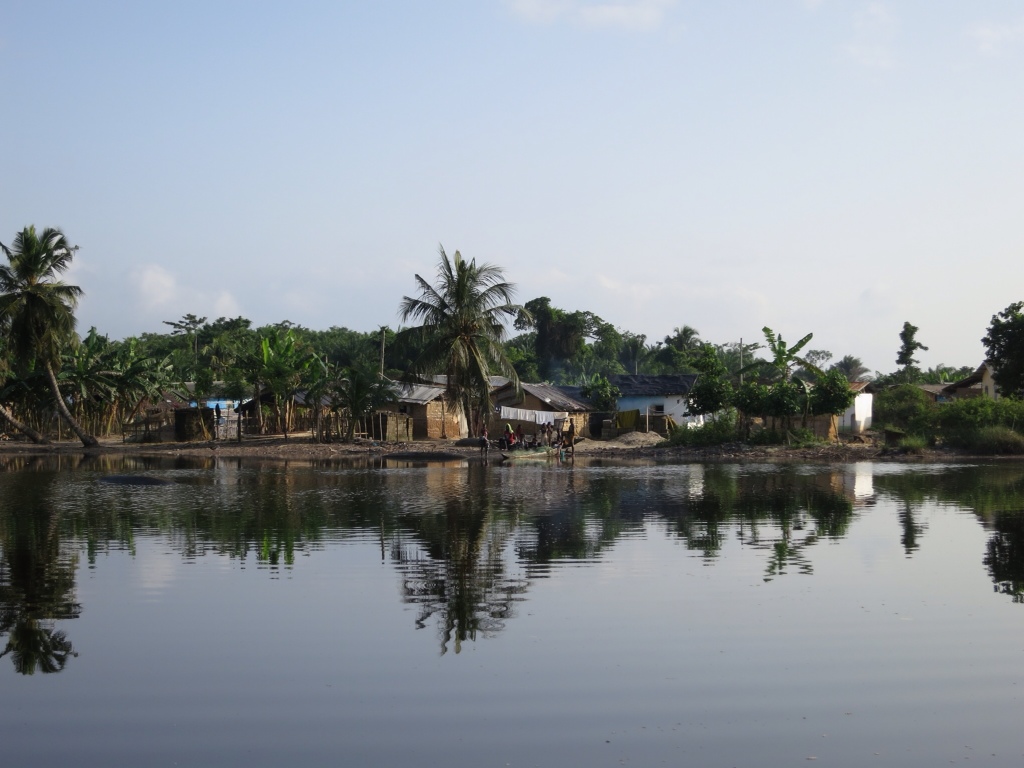 It was a peaceful and placid paddle, with all of us in a big dugout canoe. It felt a bit tippy, but would only tip a little ways and was quite stable – good secondary stability.  We saw some interesting trees in the mangrove, and heard some birds, but most were too deep in the forest to catch more than a glimpse. 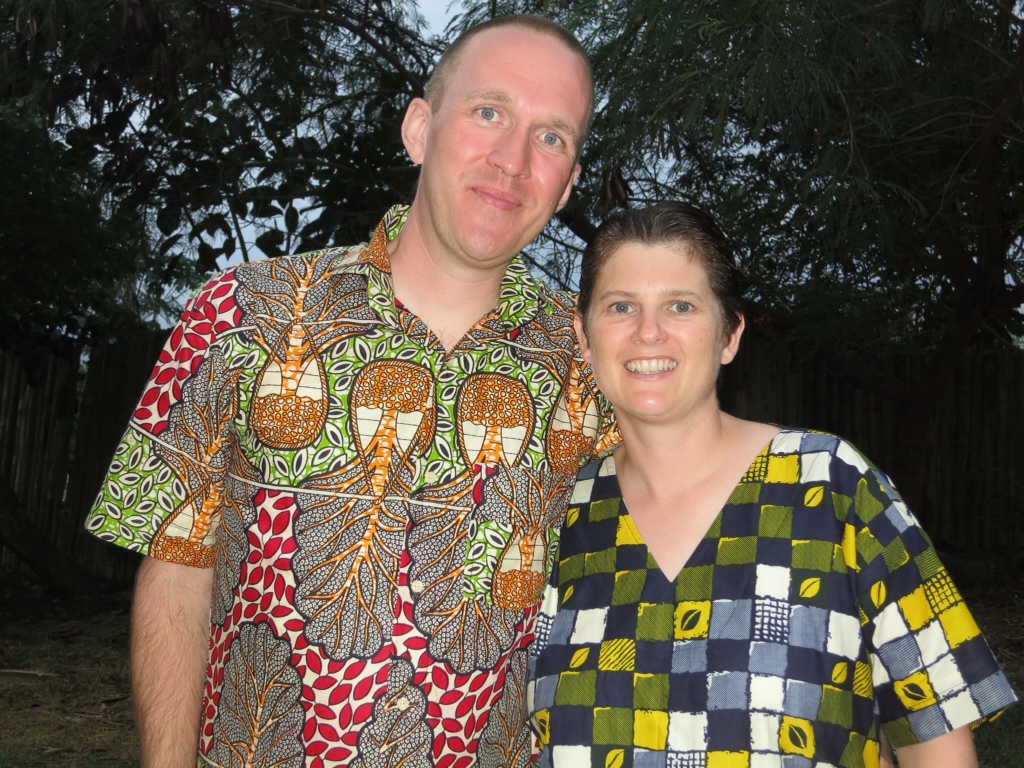 In addition to lazing about, we had the material we bought in Benin tailored. Unfortunately, the local town only had a men’s tailor, so Scott got two nice shirts. Becky got a couple of other things made, but they didn’t look so good. She did, however, get a nice wrap (made from the same material as Scott’s shirt).  This village didn’t have electricity, so the tailor used a treadle-powered sewing machine.  The shirts were quite well tailored, and all for $10 CAD. 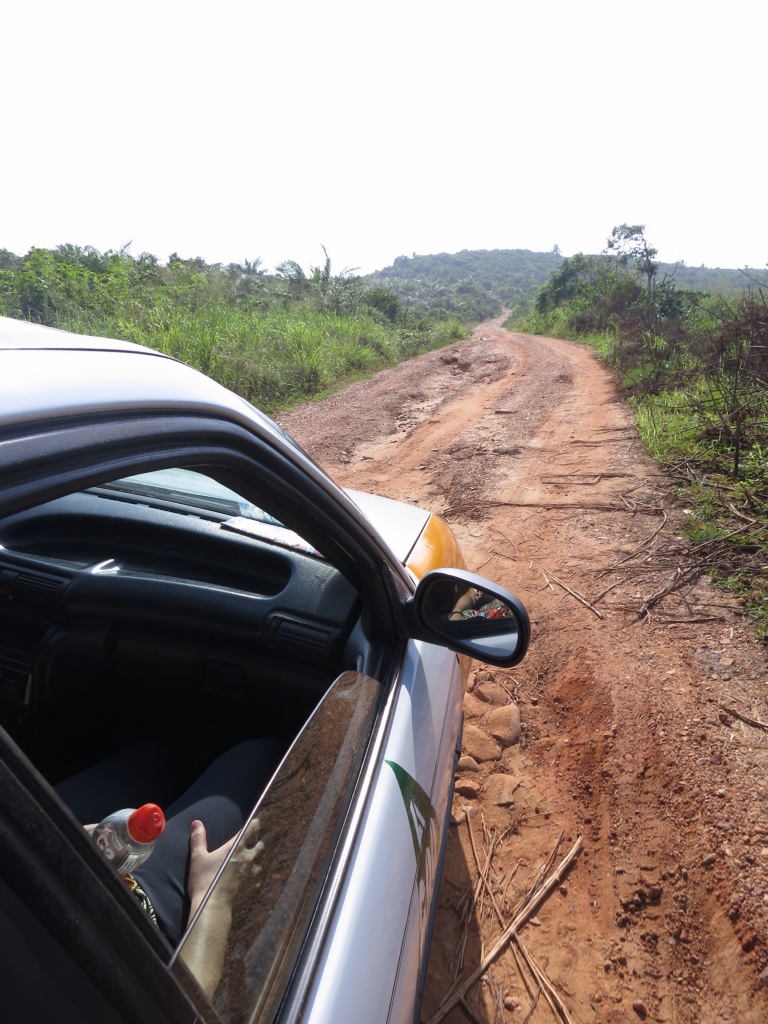 Our final adventure in Ghana was our return to Accra. Our flight wasn’t until 10pm, so we didn’t leave Green Turtle until the morning of our flight. Getting back to Accra involved a 45 minute taxi drive on rough roads (the picture shows one of the nicer sections), followed by a 3-4 hour tro-tro ride. We had hoped to take a nice air conditioned VIP bus, but when arrived at the town there were no buses in sight. Scott quickly arranged seats for us on an almost full “air-conditioned” tro-tro. Becky, quickly thought to purchase an extra seat, so that we had the entire back row to ourselves. Within 5 minutes the tro-tro was full and we were on our way. Unfortuantely, the air conditioning rarely made its way to the back of the tro-tro. We boiled most of the trip. At one point when we were stopped, Becky was able to purchase a couple of bags of cold water – this is the water that the locals drink which is cheap but not as certain in its purity – but it was cold, and served well as an icepack to help us cool down. Our tro-tro experience emphasized how good of a decision we made when we decided to hire a car and driver. Trotro’ing around for a week would have been both inconvenient and uncomfortable!

Back in Accra, Becky hatched a plan to go to the Movenpick hotel in Accra and enjoy a swim before heading to our flights. The Movenpick is the most expensive hotel in Ghana – at about 350 Euro per night. We certainly could not justify a night in the hotel, but for 25 Euro each we could enjoy a refreshing swim in the pool. Of course, this was before Becky remember that swimming pools in Ghana are anything but refreshing. After dismissing the idea of a swim, we found out that as long as we had our own towel, we could use the swimming pool showers for free. So, we each took a refreshing shower, changed into clean cloths, and spent the rest of the day enjoying the free Internet in the air conditioned lobby. We did buy dinner at the Movenpick before taking their free shuttle to the airport. It was $30 well spent!

Our flight home was uneventful, but landing in Washington’s Dulles airport was surreal – bright lights everywhere, concrete, glass and steel, self-driving trains, masses of people who looked like us… It brought to home just how easily we can get accustomed to our surroundings, and how much luxury we live in, just by virtue of being born in North America.