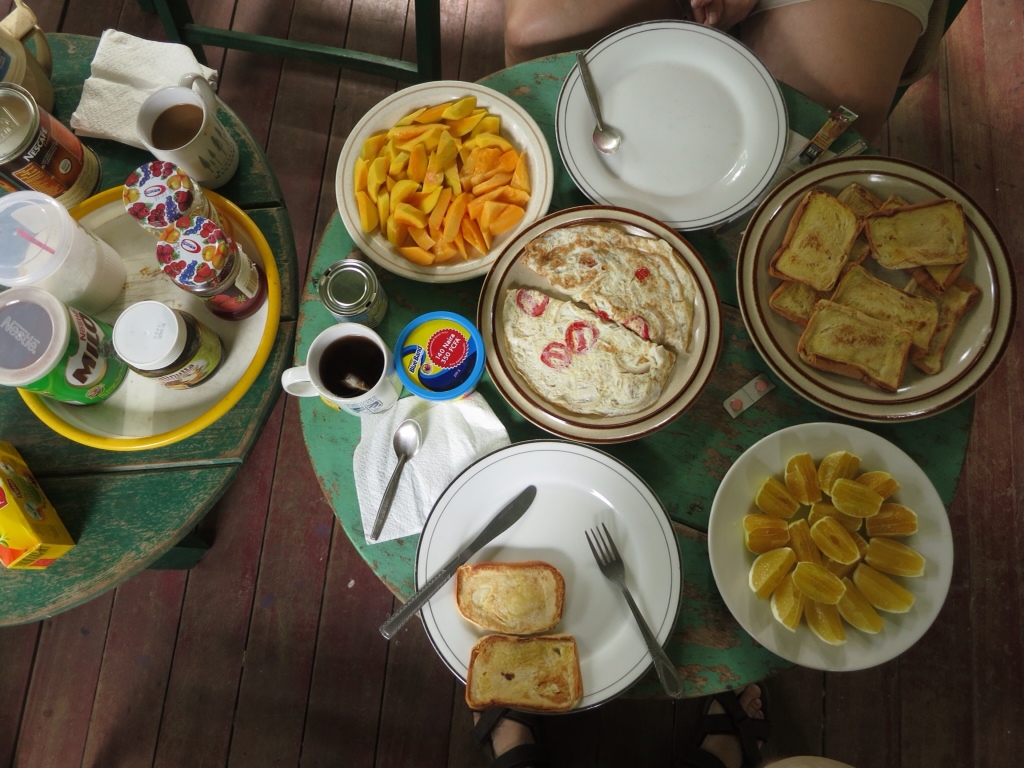 Breakfast at the butterfly sactuary was our most exotic yet. They just kept bringing us food. We pretty much rolled out of breakfast into a morning hike. 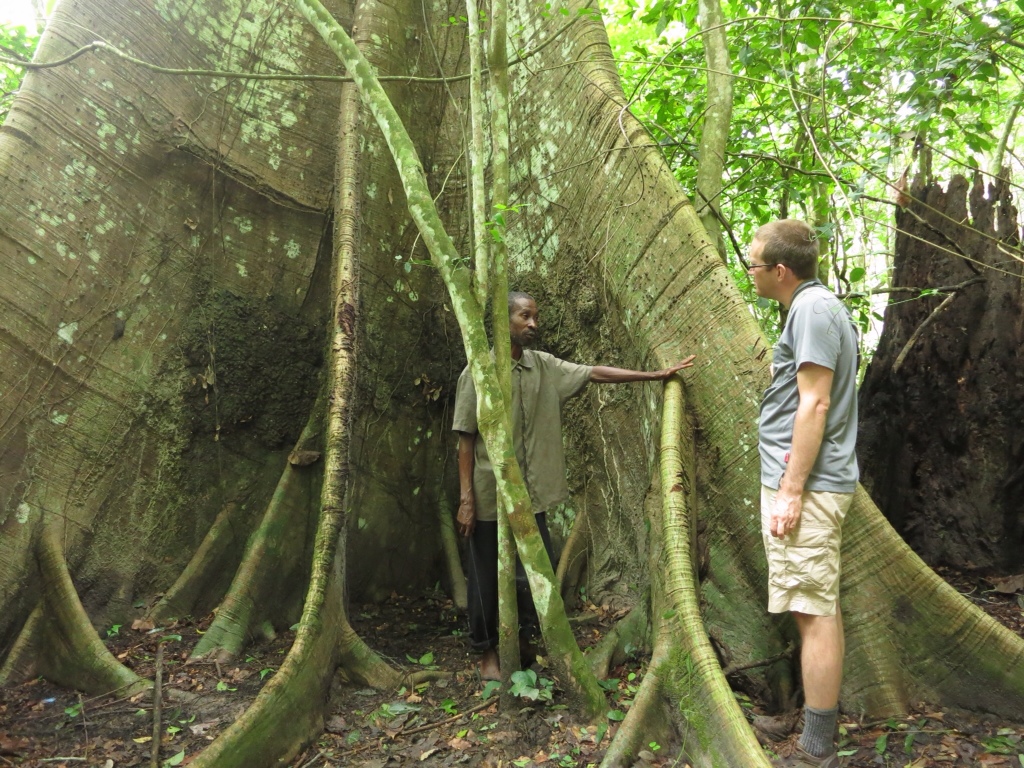 Again our day began with a hike. Actually, this was more like a walk in the woods, as the terrain was rather flat. Becky had expected the guide to be telling us about butterflies, but the interpretive talk was more about the different kind of trees in this forest. The area is protected, and several scientists are carrying out experiments on the growth patterns within the forest. Several times, we walked through taped areas where scientists were counting everything that grew. 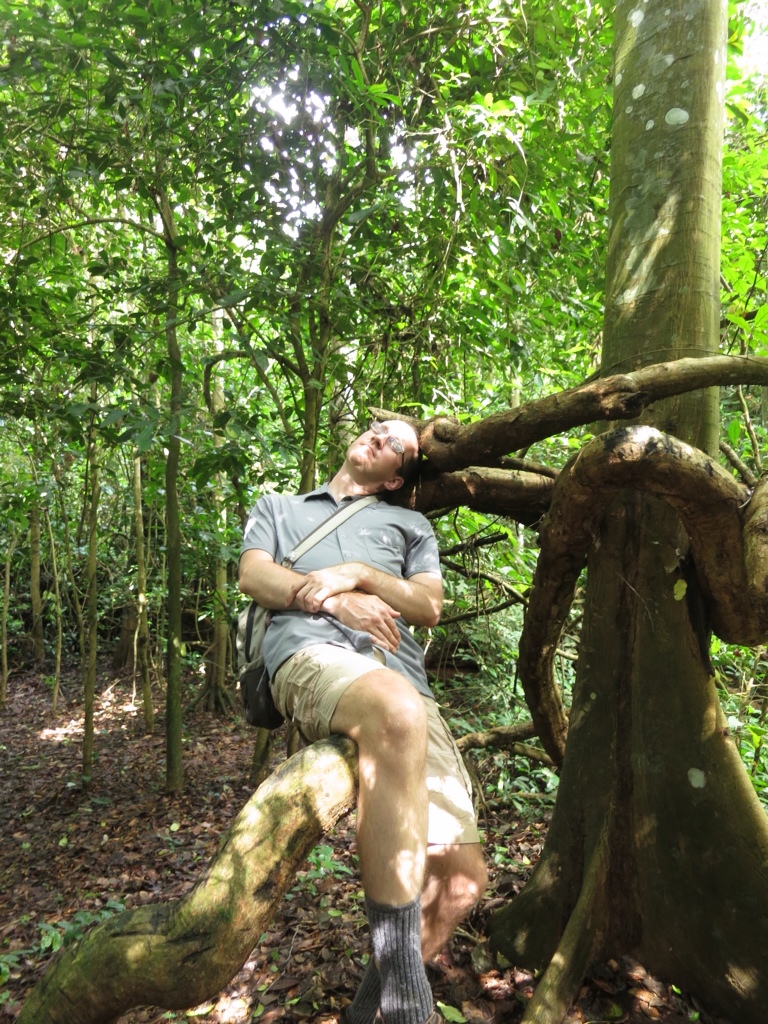 With a full belly and some fresh air, Scott needed a nap – and you know, he can sleep anywhere! 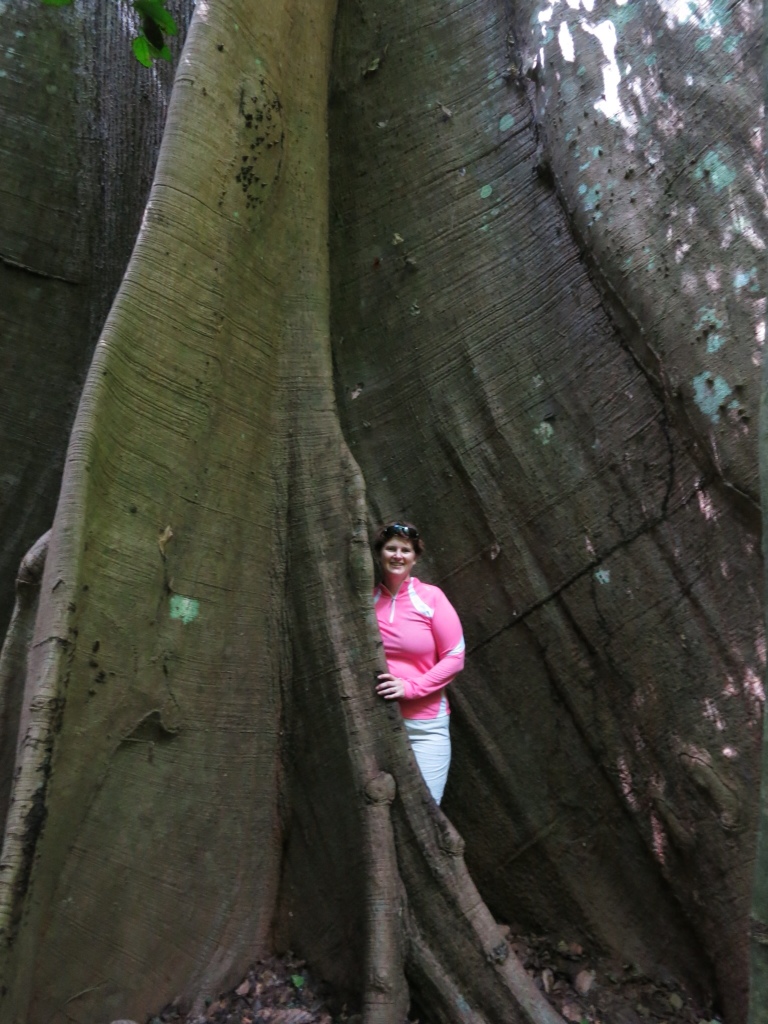 Becky hiding being the interesting root of this huge tree. 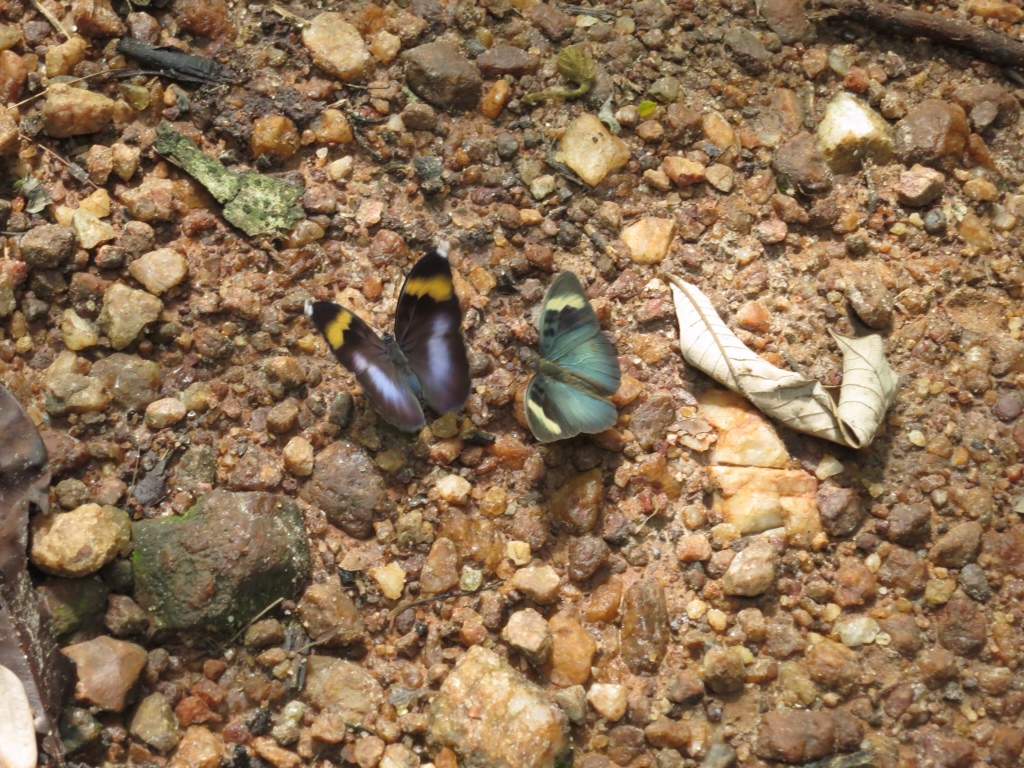 After walking through the forest, we returned to the lodge via a road. At that point, we saw many different butterflies enjoying the sun on the road. The colours were often rather vibrant. 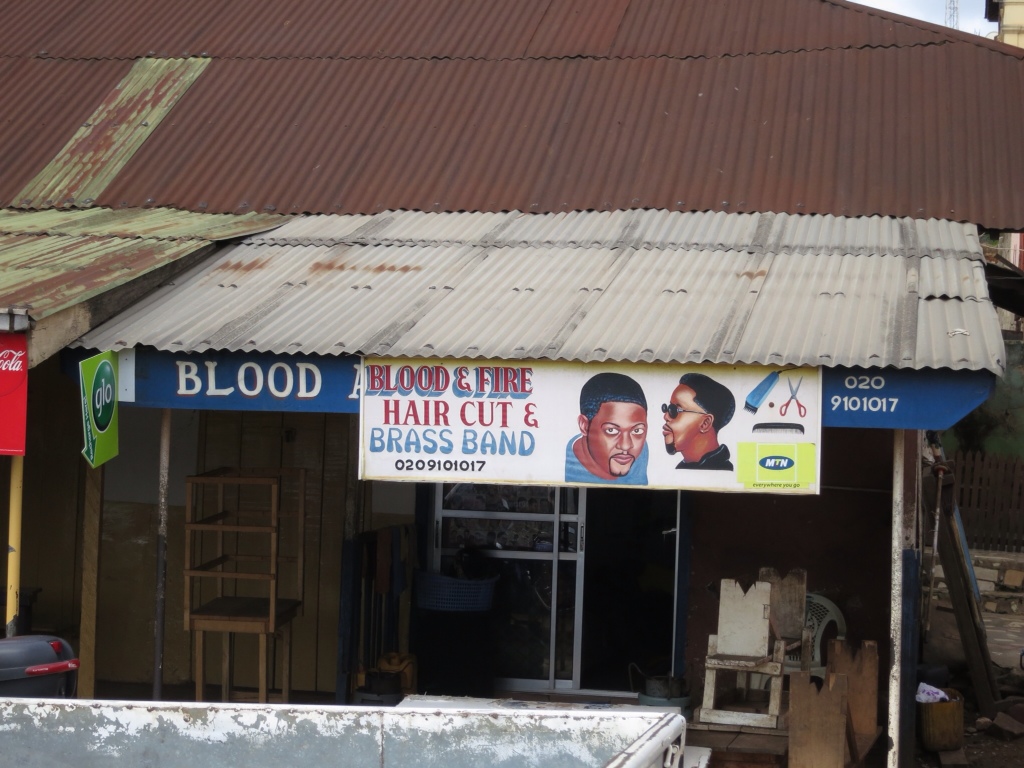 We had only a short drive to get to our destination for the evening, so we asked Fofo to bring us someplace where Scott could get a haircut. We ended up on the edge of Kumasi, where Scott had his cheapest haircut ever – less than $2 including a generous tip. The stylist really wanted to shave a pattern in Scott’s head, but Scott resisted. Unfortunately, this place was not open – we were very curious about the brass band. The people in the shop were very interested in coming to Canada, and wanted to know how to get in.  Scott explained that going to school and becoming a doctor or engineer was probably the easiest way, which didn’t really excite them. 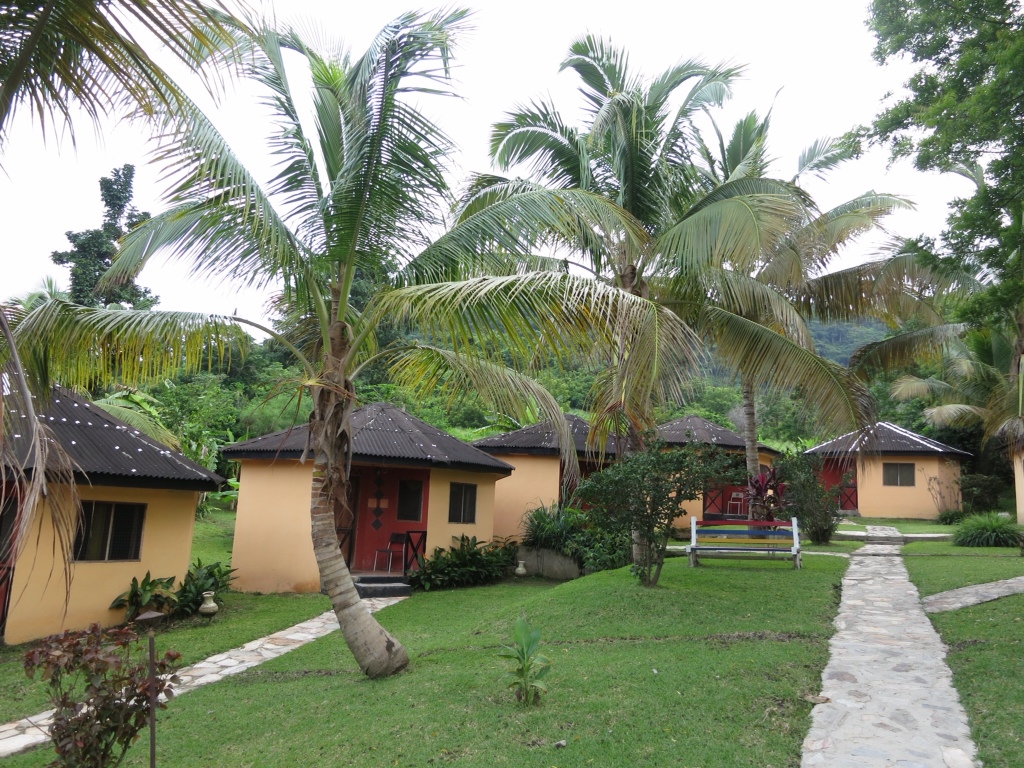 Tonight’s logding was at Lake Bosomtwe – Lake Point Guesthouse. We had a nice little cabana, with a ceiling fan (which was unfortunate as it often just pushed the hot air down). The rooms were clean and quite nice. The food at the restaurant was pretty good too. More importantly, there were MTN towers nearby so our Internet felt lightening fast! 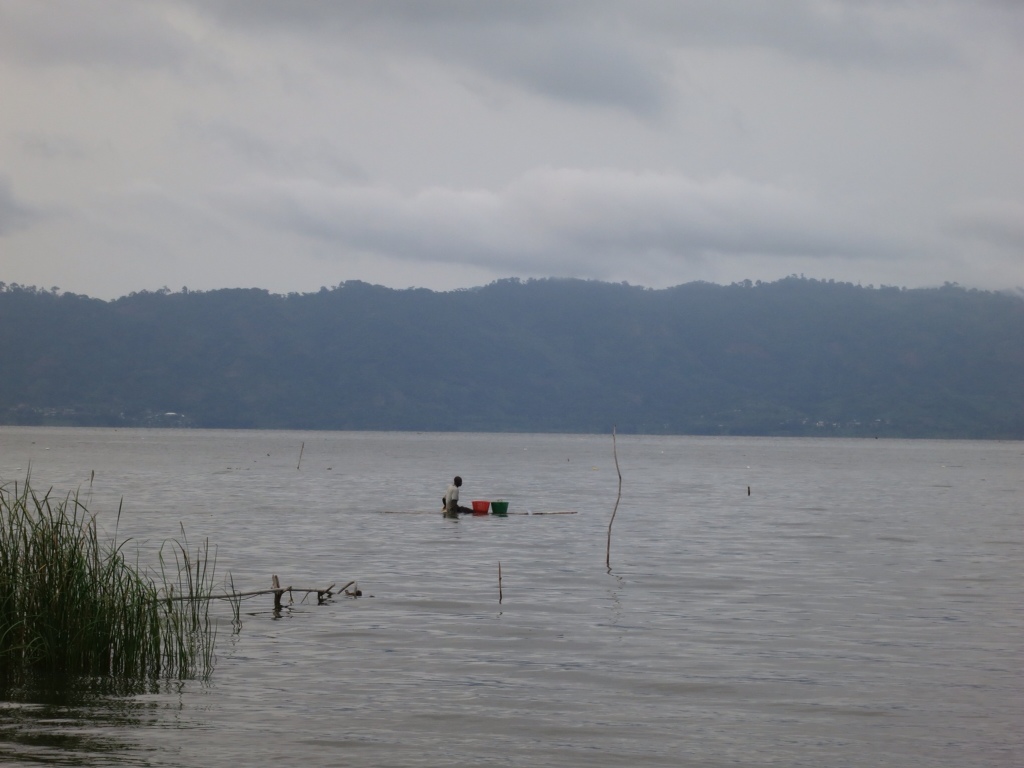 Lake Bosomtwe (also Bosumtwi or Bosumtwe) is Ghana’s only large natural lake, and was created by a meteor impact.  It is currently about 80m deep, and the size varies dramatically with rainfall and evaporation. In the warm afternoon, we thought we might enjoy a swim in the Lake. Given its size and depth, we expected a nice cool swim, unlike swimming pools in Ghana which are too warm to be refreshing. Just before we began to wade in, some German tourists mentioned to us that it was “like a bathtub”. Now, this is a term we use to describe a swimming pool that is luke-warm, or warmer than it should be for a refreshing swim. We waded in and found the water was actually HOT. It was almost warm enough to be a jacuzzi!  A very odd sensation, wading in a huge lake of hot water!
We saw many people fishing from wooden plank boats, which looked quite tricky – we learned later that the local religion forbids metal touching the lake, so fishing from metal boats is prohibited.
Since there was no chance of a refreshing swim in such warm water, we headed back to our room for a cool shower, and spent the afternoon enjoying the fast Internet. The resort itself didn’t have Internet, but there was an MTN tower close by, so Becky’s phone was getting remarkably fast Internet, such that both of us could use our iPads on the Internet at the same time, using Becky’s phone as a Wifi hotspot.