Today I visited Songhai, a 25-year-old community, business and experiment in African entrepreneurship. The Songhai website has a much more thorough explanation in the Songhai charter
, showing how they combine education, experimentation and integration of other ideas to create some very interesting programs and products. They started out in 1985 farming and raising animals, and have added fish farming, packaging of secondary products (cheese, yoghurt, spreads, soaps, bottled drinks) and then the marketing and distribution of those products throughout western Africa and into Europe. They also design and build their own tools, and build their own buildings – very different from what frequently happens in Africa, where a donor country or NGO comes in, builds a building or installs some machinery, then leaves. It’s an organization dedicated to finding new ways to live and work in the African context, using the best ideas from Africa and the rest of the world to develop sustainable practices and socio-economic models. These models and practices promote skills development, entrepreneurship and a culture of success. A very neat place, and I managed to get a tour and take a lot of pictures. Getting there, and getting on the tour was an adventure in itself, but I’ll save that for another post. A big poster showing many of the different activities at Songhai

The site I visited was the first one established, but they now have more than 10 sites, in various countries within the region, as they work to share the things they have learned with other groups and communities. From an ecological perspective, they seem to do a very good job with their ‘Systeme Integrale’, taking the waste products from all of their production, and feeding them into another production area. 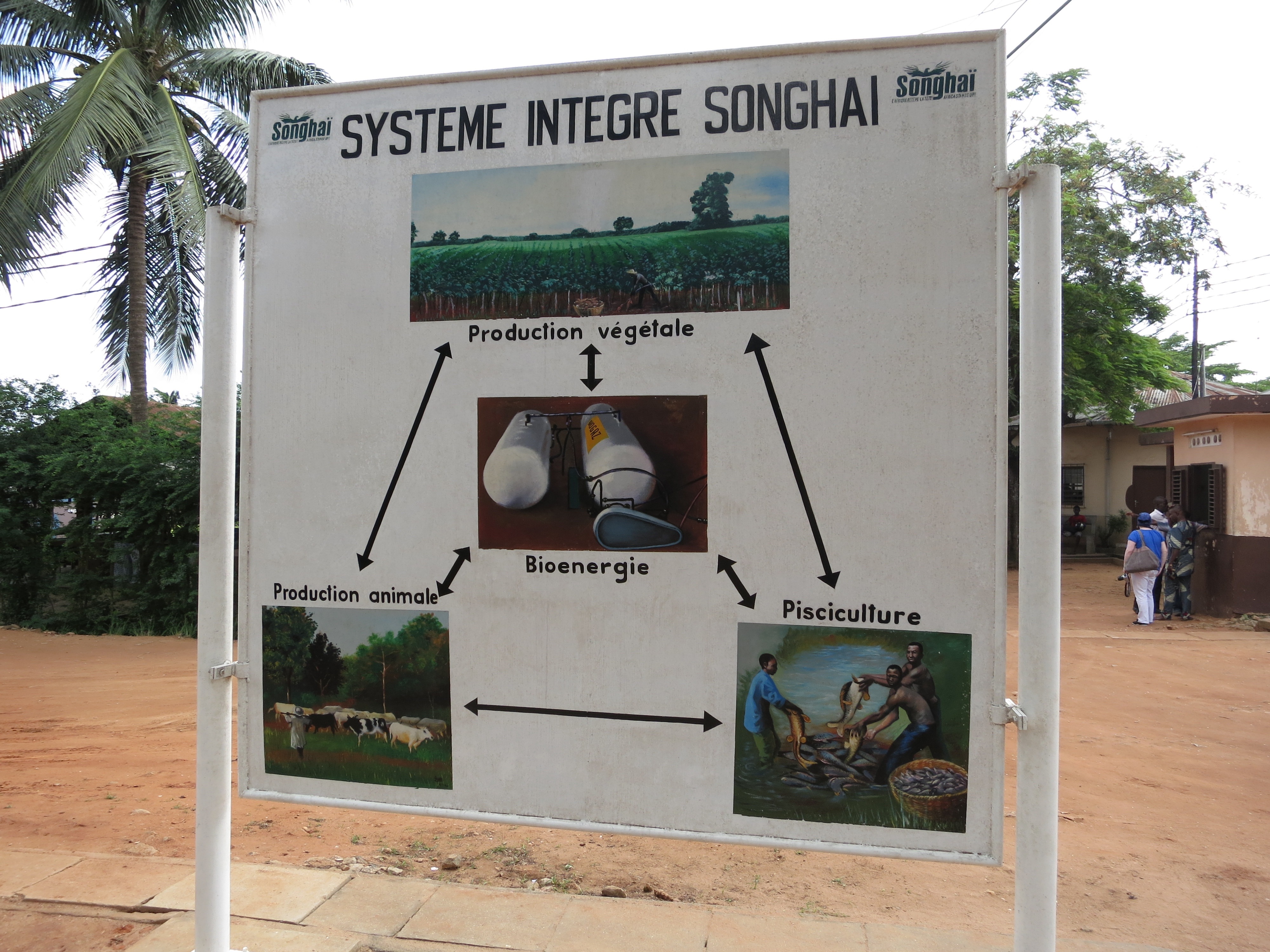 Unfortunately the tour was in French, and my French quite rudimentary. Fortunately I had scanned their website before arriving and was able to use that knowledge and my limited French to stumble along, and still took lots of pictures. 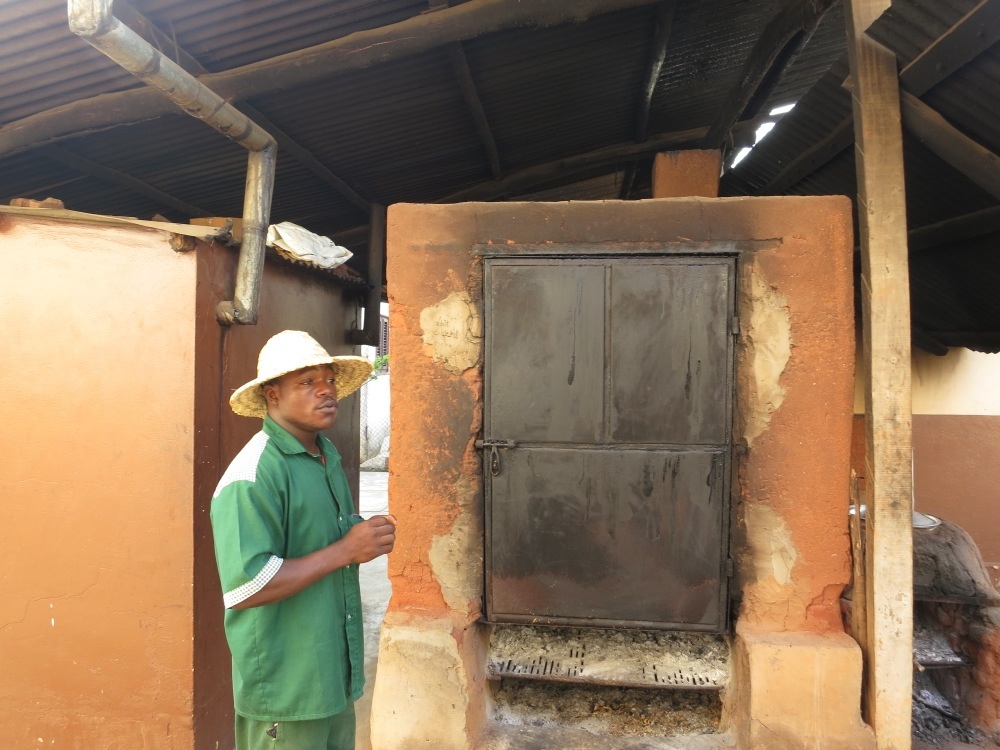 Our guide Carlos showing a fish smoker designed and built on site. (the smoked fish was yummy too).

They also have locally built bread ovens, wood fired and very large. It was the end of the day, so almost all the workers were finished, but we still got to see the various work areas. 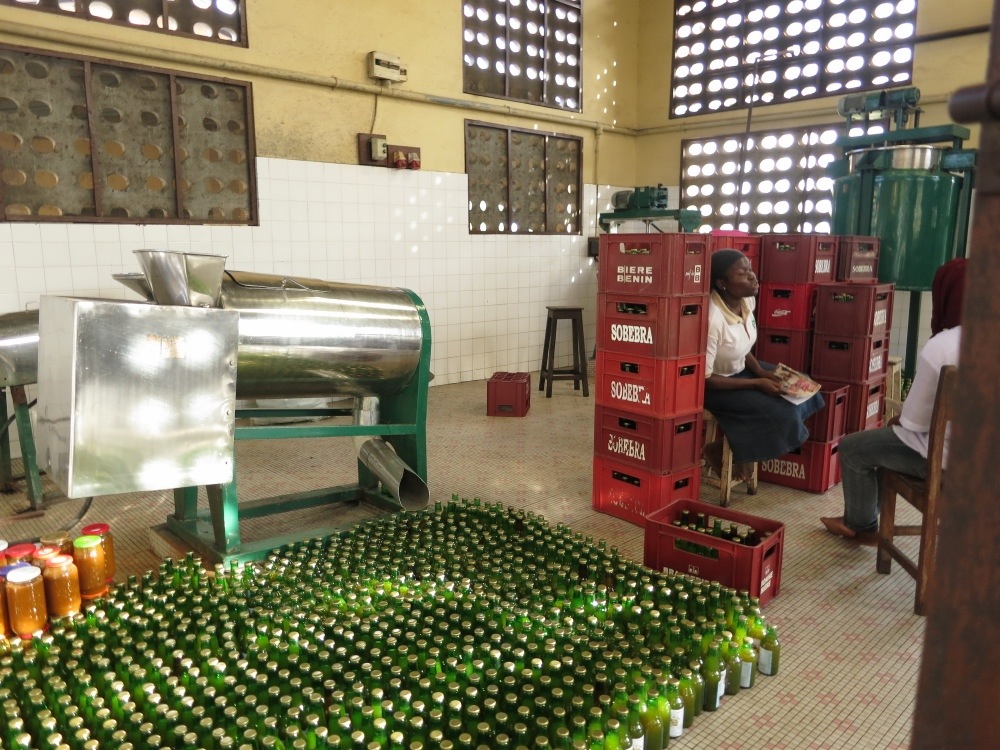 The bottling area, with bottles of mango, ginger and other flavored drinks, containing only local, organic ingredients.

Songhai raises a number of different types of fowl, including turkeys, chickens, ducks and quail. Most are caged free-range like these ones, although there were some other multilevel metal structures in use for some birds. 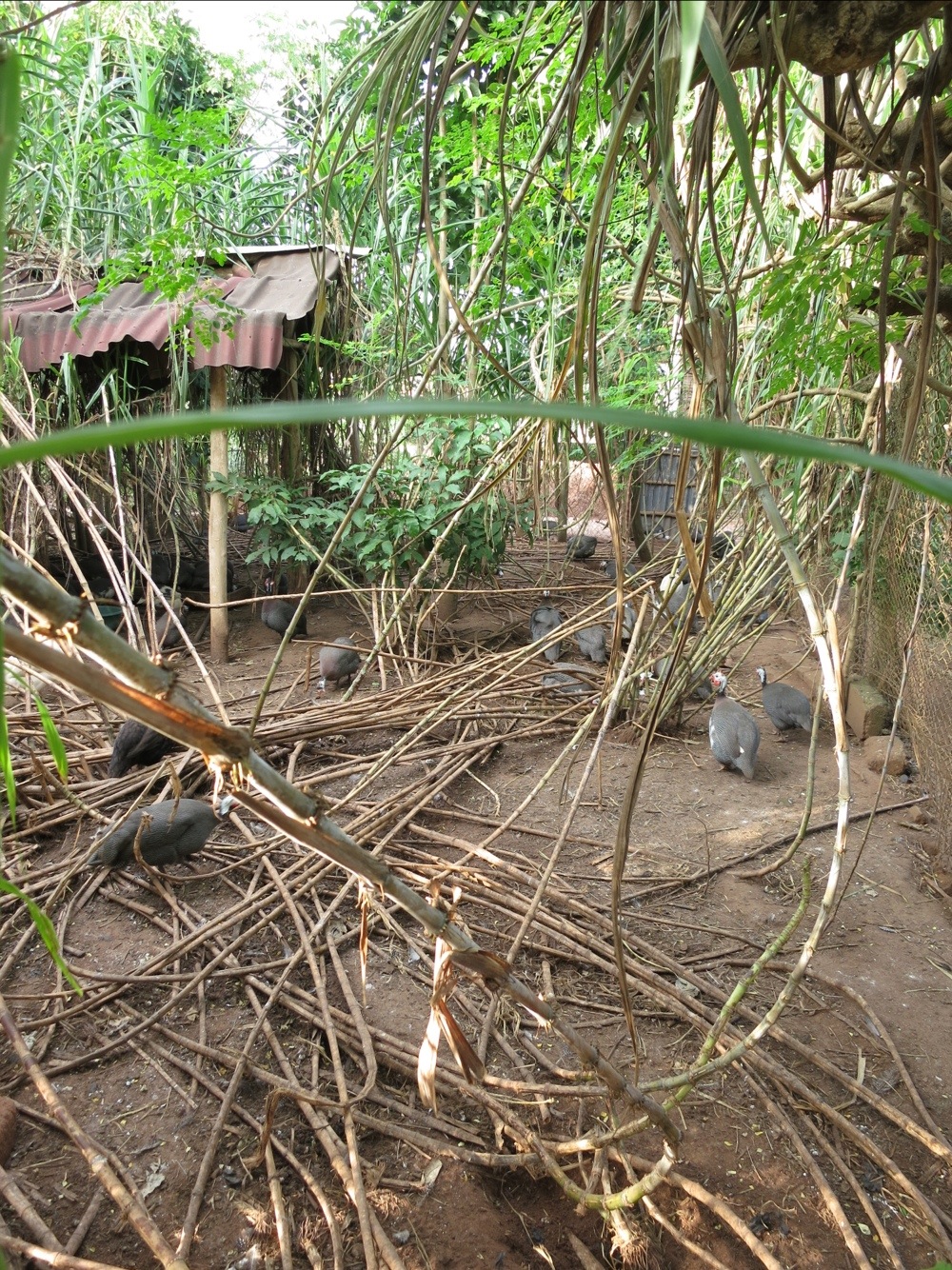 Some very community oriented birds, who appear to lay their eggs as a group.

Songhai also produces a number of clay products, including a clay water filtration system, which can filter 2.5 liters per hour and produce potable water, and apparently lasts until the filter breaks. (I tried to ask whether the filter got clogged with contaminants, and was told no, but I’m not convinced Carlos understood my question) 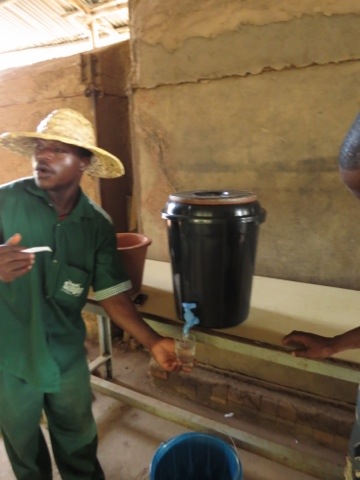 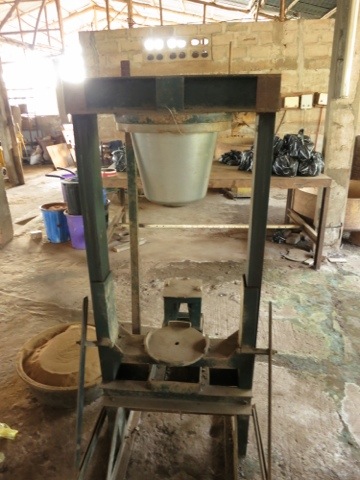 Biogas production is not on a huge scale, but is enough to help fuel other activities on site, and reduce the need for expensive imported fuel. 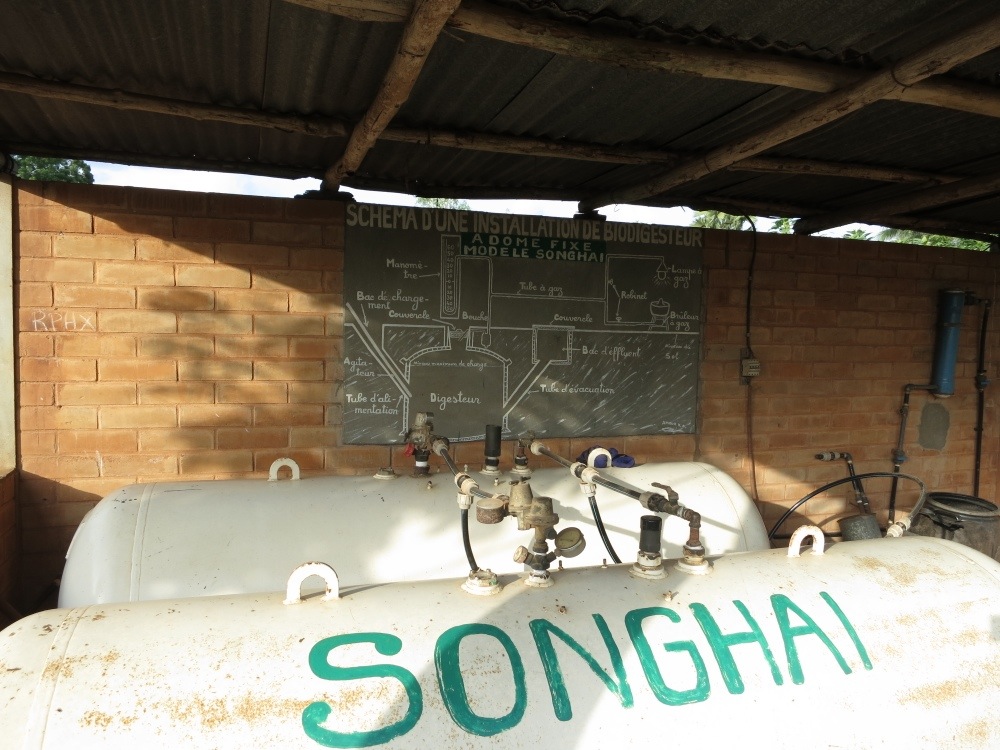 the process for producing biogas from waste material. The “digester” included a bunch of little white worms feeding on the organic waste

Fish farms are another part of the cycle, and the fish food used is also produced on site from Songhai organic material. 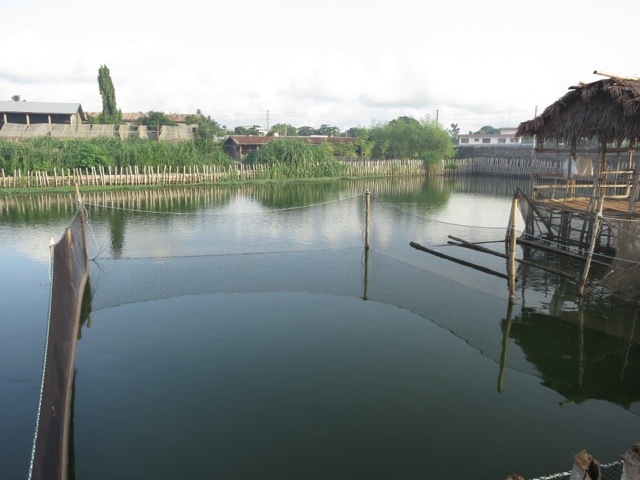 One of the fish lagoons 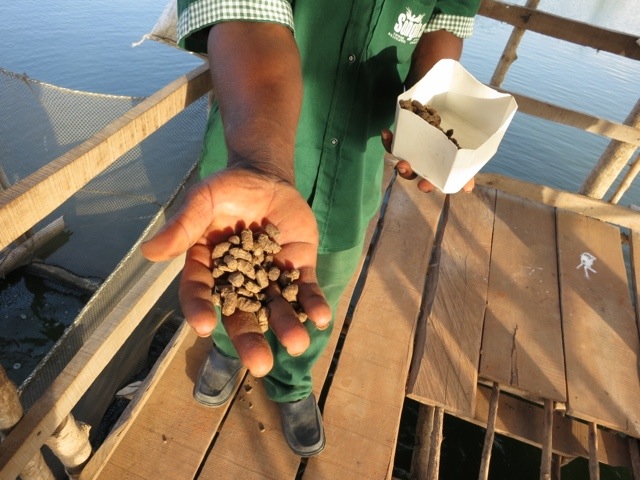 Carlos about to feed the fish 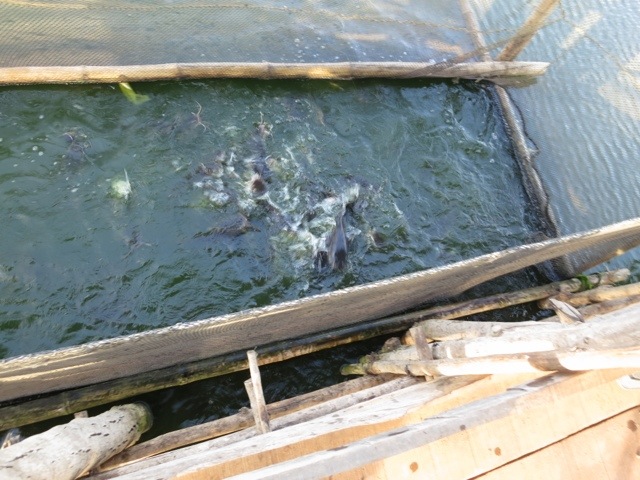 There is quite a bit more to Songhai, and I have more photos, but the Internet has slowed to the point that even uploading small photos is painful, so I’ll stop here for now.

1 thought on “Songhai – Africa stands up!”