Today was the day we moved our “stuff” back into our house.

We had not really planned it to be so crazy, but in the end, that is what happened. We had booked a cube van through Dymon Storage, with the thought that we could take half of our stuff out of storage, and leave most of the heavier stuff for professional movers – or a few strong friends. When we arrived, and asked for our $99 van, they gave us the 5 ton rather than the cube van. The van had enough room for all our stuff and then some. So, we took advantage of the larger van and began loading everything.

Since we had not planned on moving everything, it was just us. We moved midweek and decided not to ask for help. Our friends were busy with work and moves of their own anyway. After four hours, we managed to load up almost everything from the storage locker – the only thing we left behind was a hide-a-bed couch and matching chair which we planned to sell. We filled the truck to the back door, but unfortunately didn’t get a photo of everything crammed in. 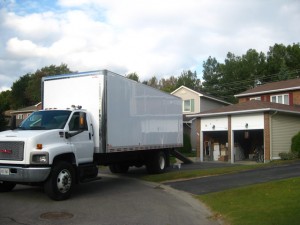 The 5-ton van in front of our house.

Knowing that we only had the van for a finite amount of time – more than we had booked, but much less than we thought we might need – Becky put out a call on Facebook for anyone who might be able to help us unload some stuff. Fortunately, our plans to unload to the garage and main floor meant that unloading was not taking as long as we expected. By 5:00 p.m. a couple of friends arrived to help out (thanks Siobhan and Eugene) and we finished the unloading by 5:30 p.m. What an exhausting day! 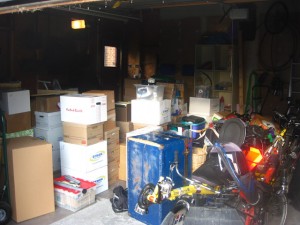 Our garage full of stuff.

Becky gave up all thoughts of making our first dinner in the house, and we went out for our first Lone Star Fajita fix since we left home. They are still delicious.

We can’t believe we did it all in one day, and mostly by ourselves. This shows us that we are much stronger than when we left home – there was no way our soft pre-departure bodies could have managed moving so much in so little time without injury. Of course we will have some sore muscles for a couple of days, but that is to be expected.

We also can’t believe just how much stuff we own. We lived quite happily for over a year with just what we could carry on our bikes – how could our stuff fill a large moving van?

The reality of being home has not really sunk in for either of us yet. We have been so busy with getting this move done, that we have not really had time to think about it. A lot of our friends have been busy with various things like moving and getting married, that we have not had a chance to see many of them yet. Perhaps as more people come by to visit and say hi we will start to feel the reality of being home.

If you are in town and haven’t seen us yet – (this post is almost a month after the fact) – please give us a call and drop by!