We received a warm welcome in Timmins from Charles and Mary Gazzola – the parents of one of Scott’s university friends. We spent two nights at their place while they ensured we were warm, clean, and well fed. We can’t remember eating so much yummy food in such a short period of time! Charles also drove us around town to see the sights and run a few errands – a wonderful break after two weeks in our tent. 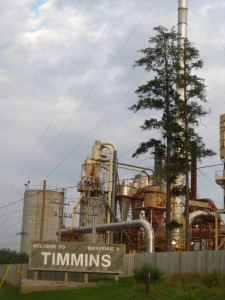 Welcome to Timmins! It is appropriate that the backdrop to the sign is an industrial plant, if not a mine. This is the Grant Forest Products Oriented Strand Board mill, which has been closed since 2006 due to a contract dispute.

Timmins is a gold mining town through-and-through. As the price of gold fluctuates, so does the job market in Timmins. Whenever there is a significant increase in the price of gold, older mines are re-visited as it becomes economical to recover the smaller pieces of gold. The people in town are accustomed to mines opening, closing, and moving. They recently moved the golf course in order to re-mine the land underneath it, since it had been built on the tailings of a previous mine. They have moved many homes as the land underneath them became a valuable source of gold. It is the nature of a mining town, that the mines – which equate to jobs and the livelihood of the town – dictate the shape of the community.

Timmins is also proud to be the birthplace and former home of Shania Twain (before she got famous and moved to Switzerland). To honour her success and in the hopes of bringing tourists to Timmins, the town built the beautiful Shania Twain Interpretation Centre in front of the Timmins Gold Mine Tour. Unfortunately, the Centre was built on land that is now suffering from sink-holes due to the underground mining. It is also scheduled to be re-mined. It is somewhat appropriate that you must drive through an open pit mine in order to visit the Shania Twain Centre. Apparently, it does not draw the large number of tourists the town had hoped. When we drove by, the parking lot only had one car in it – the Shania Twain Centre SUV! 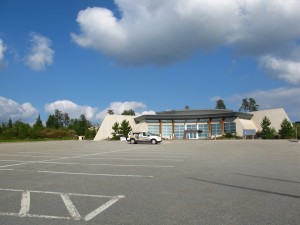 From our perspective, the Gold Mine Tour sounded much more interesting. The “gig” with that tour, is that they dress you up in old fashioned mining outfits before taking you down into an old mine shaft. It would be worth it just to wear the clothes and get some fun photos! 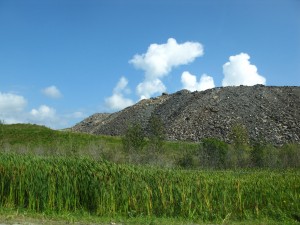 Tailings from one of the active gold mines. 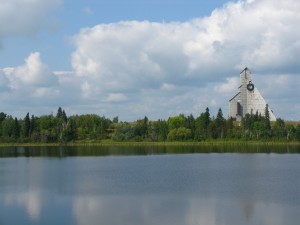 The picturesque McIntyre Headframe, a landmark that defines Timmins. The wreath on the headframe was made by a metal-working class at the high school.  When Becky first saw the headframe, she thought it was a grain elevator! 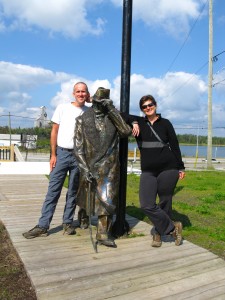 Scott and Becky with the statue of Mr. Schumacher. Mr. Schumacher was a philanthropist and philosopher. To this day, his estate gives Christmas gifts to all the kids at the Schumacher school. 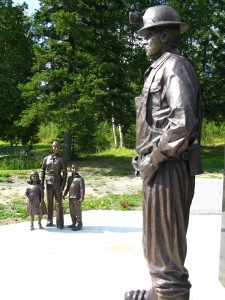 The Porcupine (a suburb of Timmins) Miner’s Memorial. This is beside what was a lovely park with ball diamonds, which was dug up a few years ago by an Australian syndicate looking to re-mine the tailings. That was par for the course, but unfortunately there was no money put in escrow for rebuilding the site after the mining, and the syndicate found nothing of value, so just gave up and left. It’s now a weed-filled field. Hopefully Timmins City Council won’t make that mistake again. 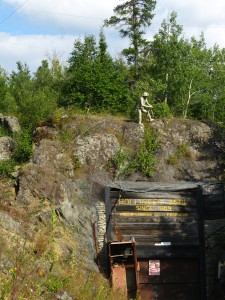 The Hollinger Mine tour, behind the Shania Twain Centre. Unfortunately, the tour was not running on the days we were in town. 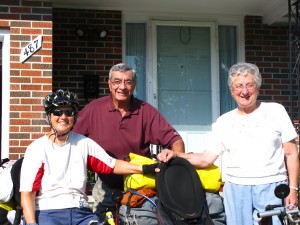 Becky with Charles and Mary. Thanks so much for such a wonderful welcome in Timmins!

1 thought on “Timmins – A mining town”