The highway 101 from Wawa to Timmins was a mixed blessing. The road had very little traffic with some sections of nice new pavement, but also had some sections of construction, 25 km of loose gravel, and lots of frost heaves – scrambling your brain with a not completely regular thump-thump-thump. Next year, this should be a beautiful road for riding! 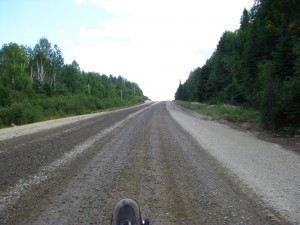 Not so nice gravel road. 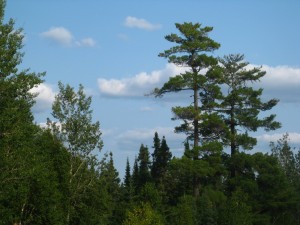 Beautiful scenery on a nice sunny day – makes up for the road conditions!

We had not really planned on crossing back into the Arctic Watershed on this journey, so we were taken by surprise when the sign appeared shortly after the Shoals Provincial Park. On our day of lasts we had thought we were finished with all this divide stuff – but alas, we crossed back into the Arctic watershed, and now are guaranteed at least one more divide when we cross back into the Atlantic Watershed in order to follow the Ottawa River home.

Wild camping for three nights with Martin and Nadine filled us with confidence in our abilities. We spent the afternoon doing laundry and stocking up in Wawa, then proceeded to head out of town with the plan of finding a nice quiet camping spot for the night.

When the rest area on the map did not appear, we pulled over onto a boat launch at the Eastern end of Lake Wawa and made dinner. It was picturesque and relaxing, but also too close to the road for camping – especially on a Friday night.

Further down the road, we found a side road that opened onto a gravel pit that was surrounded by trees and ATV pathways. We chose a spot above the pit along one of the sides. It provided us with a view of the gravel pit and surrounding areas, however the area was rather rocky – so we thank the Thermarest Gods that our sleeping pads work well when spread over gravel. Becky did not want to camp in the pit because it felt too much like being inside a fish bowl.

Having picked a spot for camping, we were off to the treed area looking for a place to hang our food. This turned out to be much more painful and stressful than either of us liked. After over an hour of tossing random things into trees and not being able to get a clear line, Becky suggested we just leave the food 100 meters away from us in the middle of the gravel pit – it was late, and our attempts at hanging were not improving with fatigue and darkness. On the walk back to the tent, it occurred to Scott that we could just hang the food over the edge of the gravel pit. Well D’uh! We should have thought of that much sooner. The process turned out to be rather simple and was easily achieved by Scott while Becky set up the tent. We certainly should have thought of “hanging” from the ground level well before considering hanging from a tree.

It was well after dark by the time we crawled into the tent. With our food safely stowed and us camped well off the highway, one would think we were in for a peaceful night. And we were, until 4 a.m. when some random folks on ATVs came thundering into the center of the gravel pit (glad we were not camped down there). They must have caught sight of our food bags with their headlights and upon further inspection saw our tent. We heard:

We’re guessing that the reflective patches of our food bags caught their eyes, appearing to hang in mid-air over the side of the gravel pit. We’re glad that discouraged them from riding that edge, since the path went right past our tent.

After a couple of loops around the pit, off they went. We heard the bumble bee sounds of distant ATVs a couple more times before things were quiet for the rest of the night.

We awoke to a crazy layer of fog, which made it impossible to see the bottom of the gravel pit. The fog meant we couldn’t get a quick start in the morning, as the roads would not be safe. In addition, it meant that everything was wet. Rather than pack up and run, Becky went berry picking – she had noticed a bunch of raspberry and blueberry bushes near the entrance to the gravel pit. For breakfast we enjoyed a feast of fresh berries atop our hearty oatmeal. 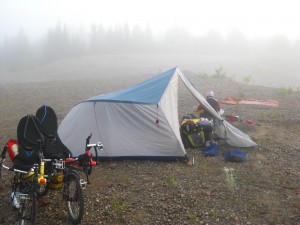 Making breakfast on a foggy morning. 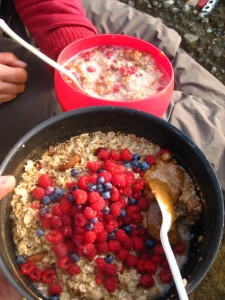 Our lunch stop lined up nicely with Potholes Provincial Park, a tiny day-use nature reserve with parking, pit toilets and a trail to the potholes. It was a lovely place to stop for lunch – the trail was rideable for the first 300m, so we walked the last bit and had a lovely lunch beside the burbling creek and the water-carved potholes which give the park its name.

That night, we pulled into Shoals Provincial Park with the plan of just having dinner there. However, our dinner preparation took longer than planned and the lake was nice and warm, so we changed our plans and set up camp at the park. Again hanging our food became a challenge. At the park there were many more trees that presented much better options than in the gravel pit (the brush under the trees was cleared, making it much easier to wrap the line around trees); however, our two tree approach was proving to be not nearly as simple as we first thought (we must have been lucky the first two times we tried it). One issue was that we really did not have a long enough rope – we’re missing the three meters we left stuck in the tree near Thunder Bay! Eventually, we did manage to get the food hung between two trees, but not nearly as high up as it should have been (within reach of Scott if he stretched). Fortunately, we were in a provincial park and didn’t see any “habituated bear” warnings, so did not worry too much about it. 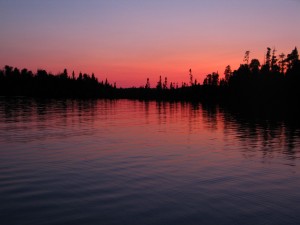 Sunset at the Shoals Provincial Park.

For our final night before arriving in Timmins, we decided to camp at a park rather than wild camp. The whole act of hanging our food was causing us both too much stress and frustration at the end of the day. We headed toward the Ivanhoe Lake Provincial Park but came across the Red Pine Lodge first. They had a beautiful campsite right on the water. It was on the edge of a trailer park with a fair bit of activity, so there was no worry about food storage – we could just leave the bags in our vestibule for the night. After a wonderful hot shower (our first since Aug 31, so it felt rather luxurious), we crawled into our tents and promptly fell fast asleep. 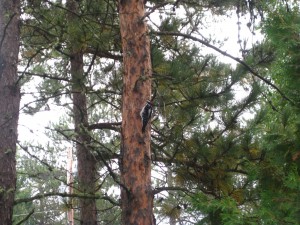 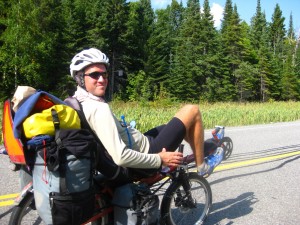 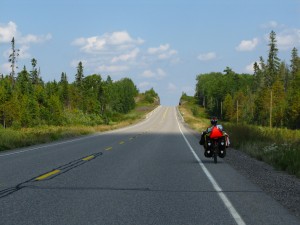 Becky preparing to climb another hill.

1 thought on “Thinking outside-the-box and another continental divide”