We awoke to rain and promptly turned over – hoping it would stop. When that technique didn’t work, we got up and found shelter for making breakfast in the kids play structure. The forecast said it would clear by the afternoon, so we took advantage of the 2 pm checkout time, and hung around. They also had a sauna, so we hung out in it, staying dry and warm.

By 1 pm, the rain seemed to have lighted up and we hoped it would stop for the day. We packed up and hopped on our bikes. Within an hour, the rain picked up again and didn’t stop for the rest of the day. As we approached Sioux Narrows, the rain lighted up, so we opted for camping at the overpriced provincial park ($27.25). Fortunately, they had a dryer, so we immediately headed to the comfort station to dry out our wet weather gear and take a warm shower.

Clean, warm, and dry, we headed out to the day use area in search of a picnic shelter so that we could make dinner without standing in the rain. The picnic shelter turned out to be huge, with six tables and a nice empty table-free space. The campground was almost deserted – we saw only three other occupied sites when we were at the comfort station. Knowing the park was empty, we hoped they would allow us to set up our tent under the picnic shelter rather than moving back up the hill to a formal site. 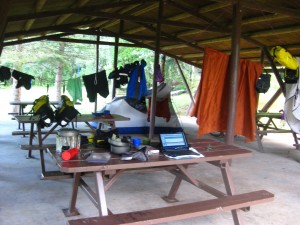 Our stuff all sprawled out in the picnic shelter at Sioux Narrows Provincial Park.

Upon entering the picnic shelter, Scott noticed an owl in the tree – at first he thought it was fake, but then it moved. Becky was fascinated by it. It didn’t seem to be bothered by us, so we setup our dinner preparations on the far side of the shelter. At one point, a chipmunk came running through the shelter towards the owl. We expected the owl would have dinner as well, as it swooped down on the chipmunk. Fortunately for the chipmunk, it dodged the attack and froze half way up a tree. Later we watched the owl catch and eat some tiny field mice. Becky found it fascinating, since this was the first owl she’d seen in the wild. It was definitely habituated to people. 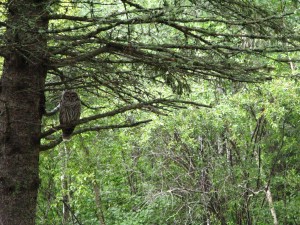 The campground attendant drove by and told us we could indeed stay under the picnic shelter if we wished. As long as the wind didn’t come from the south we would be well sheltered. We spent the night nice and dry under the shelter with the fly off the tent listening to a constant drumbeat of rain. By about 3 am, the rain finally stopped and the skies cleared.

With a nice sunny day, we were able to dry out most of our gear before starting out for the day. The hills were rolling but the wind was mostly at our backs, making for a pleasant day on the bikes. We stopped at the side of the road for lunch – a brief miscommunication as Scott had hoped to pull into a boat launch and enjoy lunch by a lake but failed to communicate that with Becky who was protein starved at the time and just needed food (oh well).

After making slow progress in the morning, the hills leveled out and our average speed increased significantly. Our map showed many small towns after Nestor Falls, but we soon discovered there are no services between Nestor Falls and Emo. We had hoped to camp in Emo, but there were no official campgrounds, so we stopped for pie – which turned into a stop for dinner. At dinner we learned that the nearest official campground was on the far side of Fort Frances. Just before we left the restaurant a nice gentleman came out and told us that we could camp at the Devlin ball diamond if we were not going to make it to Fort Frances.

We had high hopes of making it to Fort Frances on departure, but the sun soon told us we needed to change plans. When we saw the ball diamond in Devlin, we pulled in. There was a nice place to setup underneath the concession stand so we would be covered for the night, and they had several picnic tables. Unfortunately, the bathrooms were locked, so we had to use the nature option. There was also no water available, so Scott ran back to the local convenience store and purchased a 4L jug of water ($2). All-in-all a good day’s ride and a comfy and free place to sleep.