The ride from the hell hotel to Rocky Mountain House was mostly downhill – a 400m loss in elevation with a nice tailwind. After about an hour of riding, we met up with another cyclist, Jon from Colorado, who was riding a mountain
bike and towing a bob trailer (a single wheeled trailer). Jon was up visiting his fiancé who was a guide in the park. Scott enjoyed talking to him for an hour or so while we rode towards Nordegg. It was interesting to learn how energy audits and household energy efficiency improvement efforts work in Colorado. Becky found that she was happier going at her own pace rather than trying to keep up with Jon and Scott through the hills.

In Nordegg we enjoyed a wonderful lunch at the cafe in the museum. They had homemade soups and sandwiches on homemade bread. To top it off, they had home-baked pies with some of the best vanilla ice cream we can remember. Mom and Dad caught up with us at lunch to let us know where we would be staying in Rocky Mountain House – it is definitely handy having someone to scout out the road ahead for you! As Scott described the bus-sized RV towing the Hummer which had passed us earlier in the day, Dad’s response was “Did you see the giant black carbon footprints it left?” We thought nothing of it beyond a cute turn of phrase, but Jon was quite impressed. He helps homeowners and builders make more energy-efficient homes, and seeing Carbon Footprint being used in casual conversation made him very happy.

At Nordegg Jon turned south onto a 170 km logging road to Canmore and we continued on to Rocky Mountain House. It is a slightly strange name, since we couldn’t actually see the Rockies. The name comes from its origin as a fur trading post for the Hudson’s Bay Company in the 18th and 19th centuries. It is a pretty little town with all the necessary amenities including a great bike shop – which we were very happy to discover.

When Scott rode Becky’s bike in Kitimat, he noticed that her bike had a tendency to want to go straight. It was like there was a portion of the turning arc where it wasn’t smooth and caused the bike to prefer a straight line. By the time we arrived in Jasper this tendency was even more extreme, and it only got worse as we rode through the Rockies. It became a problem when Becky found it unsettling while carrying an unbalanced load, fortunately she was able to give the extra front pannier back to Scott. After a bit of research we learned that this was called “index steering”.

When we arrived in Rocky Mountain House, Scott pulled apart the headset of Becky’s bike and we discovered that three of the ball bearings in the lower bearing race had shattered (or so we guessed from the metal shards and the missing balls). We did not have the necessary replacement parts, so decided to take a rest day in Rocky Mountain House, and use Mom and Dad’s van to transport the bike to the local bike shop (Rocky Mountain Bike and Board) – we hoped they could either sell us the correct part or do an emergency repair. Fortunately, the guy at the local bike shop took pity on us and managed to fit the repair into his schedule. For $30 of labour and $6 in parts, Becky received a nicely lubed and smooth running headset. When she first got back on the bike, she found that going back to normally responsive steering meant it was a challenge to ride in a straight line! 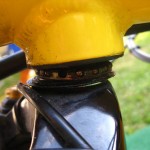 From Rocky Mountain House, Becky’s parents returned home, having seen us through the Rockies. We were so grateful for their help and all the wonderful meals Mom made – we were definitely well fed. We were also glad to be heading east with enough time that we could still reach Saskatoon in time for Jodi and Cameron’s wedding on August 1st. If we had to carry all our weight through the Rockies, we don’t think we would have made it. On the flip side, we were also glad to be out on our own again. We find that we have more chance encounters with interesting people when our bikes are fully loaded and people wonder if we need help. 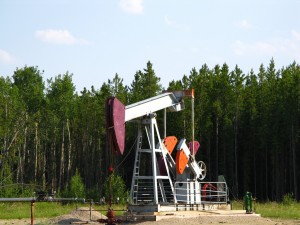 Our first Alberta oil rig – and a nice colourful one too. 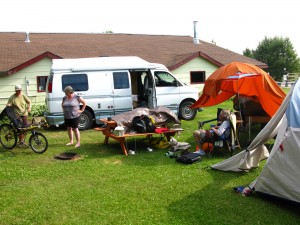 Staying out of the sun proved to be challenging – notice the shelter mom and dad created with the boat trailer, umbrella, and our nice orange tarp!