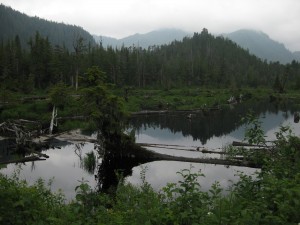 The morning dawned grey and cloudy, but fortunately there was little rain – only an occasional misting. It did mean our view lacked mountains with their snow capped peaks; however, the mists still made the views quite picturesque. The ride from Prince Rupert to Terrace was to be our longest single day so far on the trip. Becky had fearful memories of the hills leaving Prince Rupert, especially the summit. She was somehow estimating a climb up to 600 or so meters. Fortunately, her memory failed her, and after two hours of rolling hills with a couple of minor climbs and only 200 meters of climbing we were coasting down the summit to the Skeena River Valley. Once in the valley, the road is very flat slowing climbing from sea level to 25 meters, following the Skeena river for almost 100 km.

We stopped briefly at a roadside boat launch, as Becky had an empty water bottle and figured they might have some fresh water. We learned that the launch was actually a government testing site, where the amount and types of salmon entering the Skeena river is measured. The measurements are used to calculate the salmon fisheries quotas for the river. 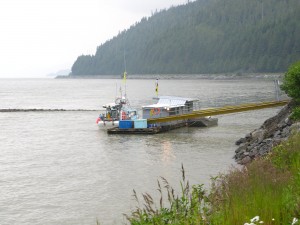 On the ferry, someone mentioned a new restaurant between Prince Rupert and Terrace. When we checked with others, no one had heard of such a place. At about the 80 km, we stumbled across the Kasiks Wilderness Resort. It appears to have an restaurant, gas, and camping. Since we had packed our lunch and wanted to try and beat Becky’s parents to Terrace, we did not stop. For anyone doing the ride, this would be a great place to re-fill water bottles, have lunch, or even camp or stay for the night. We did not, and had Becky’s parents not met us, we would have had to filter some water from one of the many roadside streams.

Shortly after the midway point, we met a cyclist out for a training ride – perhaps a warmup for the Prince Rupert to Terrace race. He asked about our trip and warned us of the hills leading into Terrace, saying they were worse than Prince Rupert hill.

For most of the ride the road is wide with a generous shoulder; however, as you get closer to Terrace there are a couple of corners where the road is narrow and the shoulders non-existent. One such place is known as “Car Wash Rock” because the rock face next to the road often has water pouring off of it onto vehicles passing by. Over the years, several people have died when a ice came off the edge. Riding through that area was much less scary that driving. Luckily there were no other vehicles around.

We stopped at the Estew rest area for a quick snack, when Becky’s parents appeared. Mom had finished work early and they drove up to meet us along the way – bringing some water, Gatorade, and snacks. We were especially glad for the Gatorade and water, as our bottles were getting pretty low. They too warned us of the upcoming hills, so we were doubly prepared. 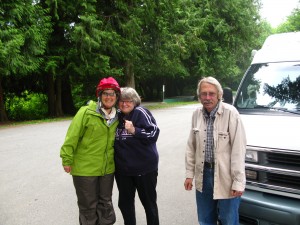 We left Prince Rupert at 8 am, and before 6 pm we had arrived at the Stone’s place (friends of Becky’s family from Kemano). Tired and sore, but glad to have made it in such good time, we were welcomed with a glass of wine, a wonderful meal, and a great visit, followed by a soft bed which we gratefully collapsed into.

On July 1st, we did the much shorter ride from Terrace to Kitimat. Becky remembers driving on this road at least a thousand times. Interestingly enough, her memories were always in the other direction. She was surprised at how close Lake Else was to Terrace – she always thought of it as the mid-point between Kitimat and Terrace. In all her years growing up in Kitimat, it never once occurred to her that she would ever ride a bicycle between Terrace and Kitimat. It is especially amusing that we considered the 64 km ride a short and easy day! 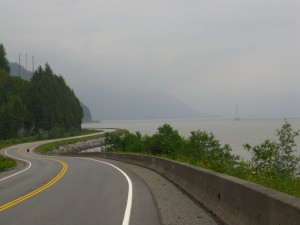 Much of the Highway 16 to Terrace closely follows the Skeena River, so is quite flat. 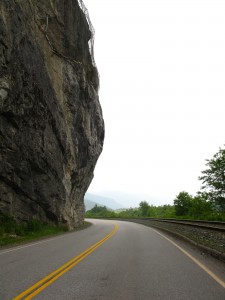 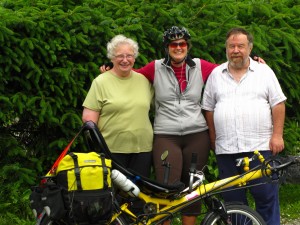 Janet and Chris Stone, our hosts in Terrace 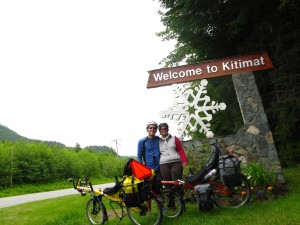