… you ask where the “toilet” is and the reply is “oh, you mean the washroom?”
… you are looking for a receptacle to charge the laptop and someone says “are you looking for a plugin?”
… restaurants advertise a “smorgasbord” rather than a “buffet”
… you understand the announcements on the ferry, and they are in only one language – English
… if the sun comes out for more than an hour, it is a “sunny day”
… a beautiful day is one when it rains for less than 50% of daylight hours
… more than 75% of the vehicles on the road are either logging trucks or RVs 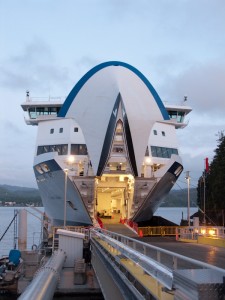 We took the brand spanking new Northern Expedition ferry from Port Hardy to Prince Rupert. Cyclists boarded with the foot passengers, just after the motorcycles. Although we were encouraged to use the bike racks at midships, we chose to tie up with the motorcycles at the stern. Our bikes and bags wouldn’t have fit well in the bike racks. There were also nice kayak racks at the stern, but they were unused. 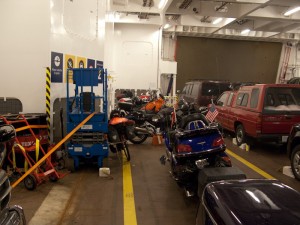 We learned that the bridge crew on this ferry did give bridge tours (we had asked on the Coastal Celebration from Vancouver to Victoria and been refused), but we made our request too late (oops). The ferry was only half full from a car perspective and only had about 200 passengers (the capacity is 600). Even at a third of capacity, it did not feel that empty. We grabbed two seats just aft of the “Aurora Lounge”, which had a huge window in front of them, and spent the day there – a nice spot. The Aurora Lounge had better seats with a view forward, but at $30 per person, it was a wee bit pricey.

The services on the ship were quite good, with a good selection of magazines and books in the gift shop, and the food in the cafeteria was pretty good, albeit expensive, and we didn’t try the “Vista” restaurant, with its beautiful views and expensive buffet ($20 breakfast, $30 supper). 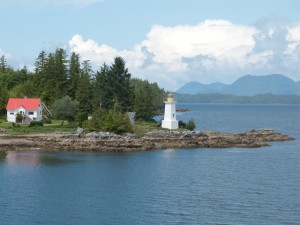 The journey from Port Hardy to Prince Rupert is 15 hours at this time of year. We had a beautiful sunny day, with several whale sightings. The officer of the watch announced various points of interest as we passed them. We were amused that when we approached Gil Island an announcement was made – however, it turned out to be an announcement about a distant whale sighting. Gil Island is the island that the Queen of the North ran into causing the ship to sink back in 2003. The Northern Expedition is its replacement.

We arrived in Prince Rupert at 11:00 pm, and were off the ship by 11:30. We had looked into the RV Campground near the ferry; however the cost was excessive, and we didn’t need any of the services. We chose to stealth camp in a park near the RV Campground instead, and spent a restful night. 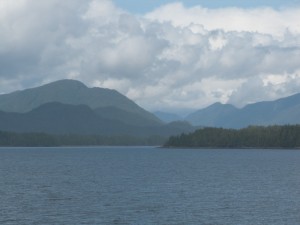 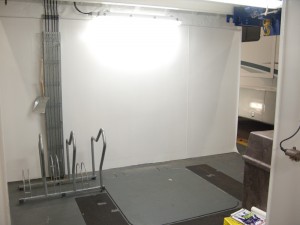 Bike racks on board the ferry