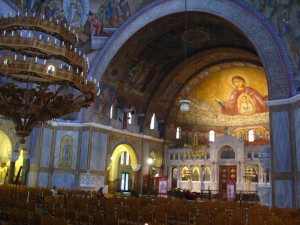 We both slept pretty well on the ferry. We are so glad that the cabin was available and much less expensive than we had anticipated. Dinner on the ferry was pretty tasty, and reasonably priced – compared to the food prices in Italy or Canada. Unfortunately breakfast was expensive and 100% protein. We will need to look more seriously into self-catering for breakfast. The coffee on the ferry was awful and expensive (3 Euro for a cup of instant watery coffee). We suspect we’ll be missing the tasty, cheap coffee of Italy for some time. (Yes, even Scott enjoyed an occasional coffee in Italy!)

We arrived in Pátra about two hours later than scheduled. Dimitris, our couchsurfing host, had come down to the port to meet us, and was waiting, but we managed to get off the boat right behind a transport, and go the wrong direction, such that we did not see each other. We wandered about Pátra in search of the tourist information center and a way to phone him. Eventually we found it, purchased a telephone card and phoned him. He had finally gone home, but five minutes later, he was back at the ferry terminal and we met.

While Becky was waiting for Scott to make the phone call, she noticed that there were many people climbing the fence between the port and the town. The police were there, but they did not seem to be doing much other than hassling the people. They were not arresting them. The people where clearly not of Greek descent. When we asked about this phenomenon later, we learned that they are mostly refugees from war regions such as Iraq and Afghanistan. They are trying to get passage further into Europe, where they can vanish into the mass of other illegal immigrants. The Greek officials appear to mostly ignore them but they do make an effort to prevent them from getting into trucks or onto ferries. They do not arrest them, as then they would have to do something with them (feed them, provide some kind of refugee camp). So at the moment, there are hundreds of people sitting near the rail tracks and jumping over the fence to the container port on a daily basis.

This is a particular problem for Greece, because it is at the edge of the EU. In Canada, this is less of a problem because there are large bodies of water between us and any war zones.

Our first order of business for the day was to drop off our bags at Dimitris’ flat. That would allow us the freedom to ride around town without the burden of the weight or the worry over losing anything. Dimitris has a nice small flat, with one bedroom. We are very happy to meet another person who is willing to share his space and culture with us.

Soon after dropping off our bags, we were back on the bikes again. The ride to lunch was a lesson in city riding in Greece. Dimitris expertly negotiated the traffic. We have found here and in Italy, that the traffic rules in downtown are a mixture of randomness, aggressiveness, and defensiveness. On a bike, although it is chaotic, it actually feels safer than in Canada or the US. Becky thinks this is because out of necessity the drivers must be more alert. Because the drivers are always looking for that scooter or other car that may cut them off, that they actually see the cyclists and often will give the cyclist ample room. Of course, this is not always the case and you need to be ready to make an emergency stop – like when the taxi cab passed me and then stopped right in front of me. We were just glad to be learning this lesson without the added 50-80 pounds of gear!

We joined a group of Dimitris’ university friends for lunch. The particular place served random dishes. You just ordered the number of dishes you wanted, and you got what was served. Everyone shared from the various plates. The food was excellent, and we had the opportunity to share many different traditional dishes.

After lunch we had a brief tour of Pátra and we visited the church of Áyios Andhréas, which was opened in 1979. It is a large and beautiful Greek Orthodox church. The main entrance way is still being built and decorated. Our bicycles continue to get lots of attention here, with people staring and pointing.

At 5 pm, we joined up with a group of cyclists for a monthly protest. The protest was a bike rally protesting for more parks, the removal of cars from the central district of Pátra, and more support for bicycles and public transportation. It was interesting riding around the streets of Pátra with about 100 cyclists chanting. We certainly never anticipated this as part of our travels! It was structured similarly to the Critical Mass (http://en.wikipedia.org/wiki/Critical_Mass) demonstrations in various Canadian and U.S. cities including Ottawa. For the most part, the demonstration was well received, and many of the people looking on cheered, smiled, or waved. There were a few irate scooter drivers – who were not happy with the brief interruption of traffic. Traffic was never interrupted for more than one cycling of the lights, and generally we were on our way before people started to sound their car horns. Apparently, public demonstrations of this nature are common in Greece, so everyone is accustomed to the delays.

There were a number of chants repeated by the group, but our non-existent Greek wasn’t good enough to understand. Unfortunately, just as the rally was coming to a close, it started to rain. We were almost back at the are starting point then. Dimitris gave us a rough translation for the last chant: “Better one hour on a bicycle in the rain than 40 years imprisoned in a car”.

Dinner was not until 10 pm. We headed out to a local restaurant and had a wonderful Greek Salad followed by a Pita filled with Souvlaki and French fries, all washed down with some local Mythos beer. The food was excellent, and 15 Euro fed all three of us. We are looking forward to enjoying more yummy Greek food.

We are finding it a little bit of a challenge adjusting to the meal times. Greeks eat even later than the Italians, with lunch at around 2 or 3 pm and dinner at 9 or 10 pm. Getting through the early part of the day will become a challenge for us, as we are accustomed to eating a real breakfast.

Tomorrow, we will spend another day in Pátra. We will try and create a replacement for Becky’s fake passport and replace some of the gear that was in the stolen bag. 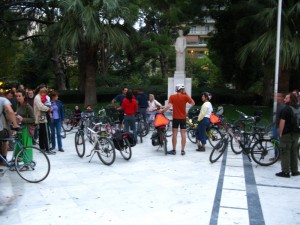