Today we journeyed from Knox’s Dam B&B in Montague to Souris. The journey began on a very nice part of the Confederation trail. I was quite happy to discover that the trail did have parts that were better packed than the part we had been on between Murry River and Flat River.

We paused on a bridge over a heritage river to visit with some cyclists that were passing by in the other direction. They told us they had the opportunity to see an 800lb tuna be brought into harbour. They said it took the fisherman more than 3 hours, with a hook that was only 2 inches long and 200lb test line. The tuna was estimated to be worth $5000. I can see way the deep sea tours say that the captain keeps the fish!

The river was very pretty and had several herons and other birds nesting in and around it. 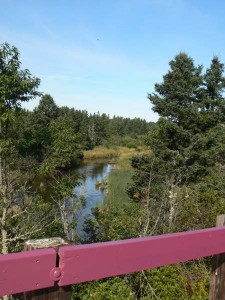 We stopped for lunch at the Inn at Fortune Bay. It was only the second day they were open for lunch, so we were lucky. It was the best lunch we had for the entire trip (and possibly even the best meal … although, we really enjoyed Piece A Cake in Charlottetown). 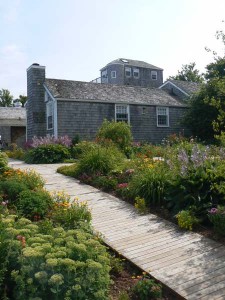 We arrived in Souris a little early; that is, we arrived at the McLean House Inn and my GPS only read 67 km, and it was supposed to be a 70km day. I could see the Souris lighthouse from the Inn so I dragged Scott along for a short additional jaunt to see the lighthouse. It wasn’t nearly as impressive as the many others we had seen throughout our travels. I guess that is why it doesn’t appear on the list of lighthouses to see! 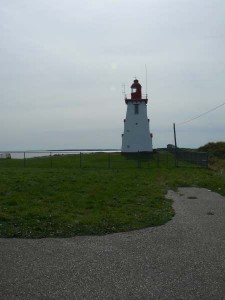